Skip to content
Home » Animal of the week » Dassie 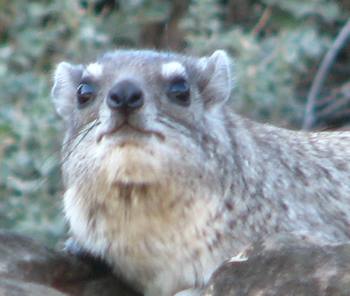 The name, dassie, is derived from the Dutch word “das”, meaning badger.

This is not certain, although pro means “before” in Latin, and Cavia is the genus name for the guinea pig and this name is derived from the name of the guinea pig in the language of the Galibi tribe from French Guiana. Dassies were originally placed in the genus Cavia, with guinea pigs. “Capensis” refers to the Cape, where the first specimens were collected.

The rock hyrax or dassie is a very popular and sociable mammal that is often seen in the Pretoria National Botanical Garden. There are currently more than three colonies and an unknown number of individuals living in the Garden and they are often seen lazing around or feeding behind the Herbarium Building on most sunny afternoons.

There is a lot of information about dassies available on websites and scattered in books and only some of the main points of interest are included here.

Dassies are generally small (up to 550 mm long and 4.5 kg in weight), with a robust body but no tail. The rough coat is brownish-grey with lighter patches above the eyes and a patch of long, black hairs in the centre of the back.

The dassie is considered to be the closest living relative of the largest land mammal, the African elephant, and also of the manatee and dugong. The most convincing evidence for these relationships is based on DNA. There is currently only one species of Procavia recognised, but two other hyrax species, the yellow-spotted hyrax, Heterohyrax brucei (Gray, 1868) and the southern tree hyrax, Dendrohyrax arboreus (A. Smith, 1827) also occur in South Africa. However, these two species have much more restricted distributions. There is only one other species of Hyracoidea, the western tree hyrax, Dendrohyrax dorsalis (Fraser, 1853), which occurs in Western and Central Africa.

Dassies have four short legs with padded feet, which have glands that produce a secretion that keeps the feet permanently moist. This moisture helps them to quickly climb up very steep rocks and tree trunks and branches. Dassies seldom move more than 50 m from their sleeping place.

Dassies communicate using a wide range of sounds including growls, squeals and snorts. An older female or male in the colony makes a sharp bark when there is perceived danger and this usually results in the colony members diving for cover amongst the rocks where they live. The strange repetitive barking sound that they make is usually a male advertising his territory during the breeding season.

Adult dassies have a dorsal gland, which is situated on their back in the region of the long black hairs, which lie over the gland. The gland is about 1.5 cm long and is an oval, bare patch of skin. This gland produces secretions that give the dassies their characteristic odour, and it is probably used by males for marking their territory, and for enabling recognition amongst individuals. 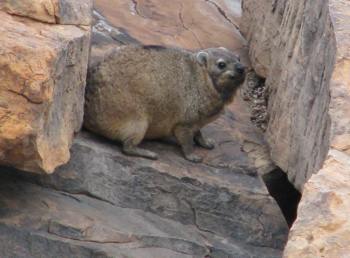 Dassies only live where there are outcrops of rock such as rocky koppies [hillocks] or cliffs or piles of large rocks or boulders and where the right type of vegetation for their food is found.

Dassies eat a wide variety of vegetation, including grasses, forbs, shrubs and the leaves of trees. They will eat plants that have very aromatic leaves and even some that are toxic to other animals.

Dassies have an average life span of 10 years and they become sexually mature at about 16 to 17 months. Females have two or three babies, which they carry for about 230 days. The babies are born in September or October in the Western Cape, and in December to February further north. The young are usually born in a well-protected place in rock crevices and they are born fully furred and with their eyes open. A few days after birth, the baby dassies are able to move around their habitat and to eat solid food.

The two sexes look very similar but mature males have thicker necks and blunter features and they are usually a bit heavier than the females. The time of year that mating takes place seems to vary with locality. In the southwestern Cape it occurs in March and April, but later, May–July, in the more northern regions. 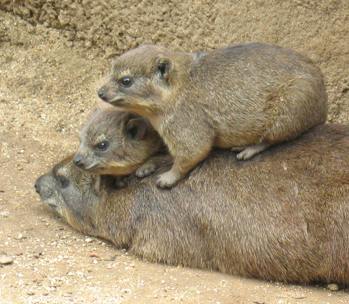 Dassies live in large groups or colonies, which are usually made up of several family groups comprising a dominant male and his harem of several related females and their offspring. There are usually a few other males that keep to the margins of the colony. The babies will suckle on any female in the colony, which is why it sometimes looks like a single female has a large number of offspring. The females are not especially caring mothers and they pay little attention to their young, apart from suckling them for a few months.

Dassies provide a food source for many predators, including Black Eagles, leopards, snakes, wild dogs and caracal. For this reason they are an important part of the ecosystem. Where dassies occur in large numbers, they can have a distinct and even negative impact on the natural vegetation, cultivated crops, or on grazing for livestock.

Dassies are well adapted to using their rocky habitat to protect them from predators. The short legs of the dassie and its padded feet with special glands ensure that these animals are able to move very quickly up and between rocks, including very steep surfaces. Their social system also helps in terms of warning the colony of danger, and the rocks provide them with a secure hiding place.

The loss of a species such as the dassie from any ecosystem is bound to have consequences for the predators that feed on them and for the vegetation on which dassies feed. The actual impact and its consequences are often difficult to predict. Dassies provide a food source for some predators that are important for ecotourism such as leopards, wild dogs and raptors.

Dassies are eaten by people in much of Africa but this is not well documented. Hyraceum is the fossilised urine and faeces of dassies; it can be seen on rock cliffs and caves where it has built up over hundreds or even thousands of years by large dassie colonies to form a hard, black substance. This is chipped away, dissolved in alcohol and is used in perfumes and in traditional medicines. The going rate for hyraceum perfumes is as much as R1 000 for 50 ml. The hyraceum is also known as “dassiepis” and is used as a treatment for epilepsy and convulsions.

Dassies are categorised as Least Concern in the current IUCN Red List. Given their wide distribution and their occurrence in many protected areas, they are unlikely to become threatened with extinction in the near future. Dassie populations have been recorded to fluctuate dramatically, with overcrowding being followed by rapid decline; possibly as a result of disease in combination with drought. Sudden reductions in dassie populations occurred across much of the distribution in the 1980s and again in the 1990s, when they became locally extinct in some places. The natural predators of dassies have been eradicated over much of its range and this may have a negative impact on natural population cycles.

Researchers found that reintroducing dassies to a new area is problematic and in a published study, the 26 animals released in a new habitat were quickly eaten by predators.