Skip to content
Home » Animal of the week » Desert locust 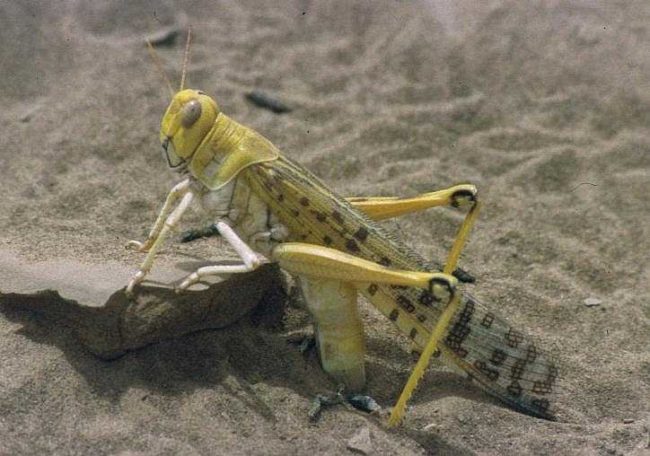 Desert locust (Schistocerca gragaria) is known to be an important agricultural pest since biblical times. This is because these locusts are able to exist in solitary as well as gregarious phases. The gregarious phase lives in swarms and are able to migrate over large areas. The success of this species is related to the extreme long-distance movement associated with swarming behavior, as such dispersal may have played an important role in determining its current distribution patterns.

Researchers have defined two distinct forms of this species: S. g. gregaria found in Africa (mainly the northern and eastern parts of the continent), the Middle East and Western Asia (Lovejoy et al. 2006), and the southern African form, S. g. flaviventris (southern African desert locust), which is known to occur mainly in solitary phase since 2005, and is geographically isolated from the nominal species S. g. gregaria by 2500 km and occurs between the Kalahari Desert and the Western Cape of South Africa, which are parts of the Succulent Karoo and Fynbos biomes (Song et al. 2017).

Picker et al. (2012) described the desert locust as a large-sized insect with a body length of about 72 mm, which belongs to a genus of more than 50 species. Of these species, only one species is known to occur in Africa. The desert locust occurs in two phases, with a yellow swarming phase, which is generally pink when freshly moulted, and greenish-white in a solitary phase.

The prothorax of the species is contrastingly marked with three cream stripes and a number of short brown stripes. The eyes have vertical stripes and are different from that of the brown locust (Locustana pardalina), which it resembles and which has dark plain eyes. The tegmina is very long and whitish owing to cream-coloured veins, but otherwise covered in black spots, like those of the brown locust. Hind wings are yellow.

In terms of genetic differences, the southern African subspecies is shown to have much less levels of density-dependent traits that results in the gregarious swarming phase. Researchers have concluded that this subspecies has access to a continuous supply of vegetation compared to the nominal species found in the northern and eastern parts of Africa, hence the loss of the plastic reaction norm in behavior leading to gregarious phase (Song et al. 2017).

Grasshoppers/locusts usually move by walking or jumping, but most adults fly. Their adaptations for movement include the forewings (called tegmina), which are thickened and with numerous veins; the hind wings also contain many veins but are membranous, fanlike, and folded when in repose. Their hind pair is large and strong and modified for jumping (Gibb & Oseto 2006).

The male locust makes a chirping sound by rubbing its hind legs against its wings.

The southern African desert locust is endemic to South Africa, which includes parts of the Fynbos and Succulent Karoo biomes. However, the areas of outbreaks are unpredictable, but it seems to move downward with rain. It does occasionally swarm along the Orange River, feeding mainly on the range of crops (Price & Brown 2002).

The southern African desert locust population feed mainly on grasses, but also a wide range of crops and is known to damage wheat crops in the Free State (Picker et al. 2012).

The life cycle of the desert locust includes the egg, hopper and adult.

In courtship, the male grasshopper makes a chirping sound by rubbing its hind legs against its wings to attract females. These sounds are species specific. During mating males deposit the sperm into the vagina of the female (Gibb & Oseto 2006; Picker et al. 2012).

Females have the egg-laying tube, which is short and usually concealed, as are the male genitalia, and the abdomen in males always turns up at the end during mating. Eggs are laid in groups in damp soil. Breeding in this species occur during the rainy season.

When the laid eggs complete their development, hatching occurs, which produce young locusts with no wings and which are called hoppers. As the hoppers grow, they shed their skins about five times and then become adults with fully grown wings. In this final stage, they migrate to new breeding areas (New Zealand Digital Library 2020).

In terms of colouration, the hoppers that are borne in isolation are usually green, but larger ones may be yellowish or pale brown, their colour sometimes camouflages well with the surrounding plants. The dense hopper bands that were laid by a swarm are black in colour, but as they get older the black markings become smaller and yellow background develops (New Zealand Digital Library 2020).

The fully gregarious adult brown hoppers are extremely active, flying both day and night and laying only non-diapause eggs in vast egg beds, which may hatch to cause major swarms. True solitary forms of the brown locust are relatively sedentary and only undertake night flights. They do not form swarms and are thought only to lay diapause eggs. These eggs accumulate on the soil in a stage of dormancy and only hatch after adequate rainfall, causing unexpected swarms. The eggs of the species are able to survive repeated unexpected dehydration and rehydration (Khambule 2010).

The desert locust has a potential of being an indicator species for natural, anthropological, local and global environmental changes. In South Africa, the records of outbreaks were indicated to have stopped in 2005. Little is known about the impacts of the subspecies as one of the agricultural pests in South Africa (Picker et al. 2005).

The natural enemies of the desert locust include the Scelio wasps, the Stomorhina flies, Systoechus larvae, Blaesoxipha worms and others. The Scelio wasps are parasitic and are known to mainly destroy the eggs of the locusts. The strategies used by the wasps are: once the female locust lays the eggs, the female Scelio wasp digs through the froth plug of the egg pod and lays its own minute eggs inside the locust eggs. Only one egg of the wasp is laid in that pod. The parasite hatches and begins feeding on the contents of the locust egg and also develops through three instars to the adult stage entirely inside the egg pod of the locust.

The adult Scelio emerges by biting open that egg pod. The affected eggs turns opaque and darker than normal eggs. Scelio wasps are unfortunately frequently encountered in egg pods of the solitary locusts but are still few in numbers and rarely found in swarming locusts. Other enemies feed mainly on the contents of the egg and thereby stopping further development. The natural enemies of the swarming desert locusts fail to control the outbreaks because they require specific weather conditions to establish their populations.

These natural enemies would also need to produce in great numbers at a particular area in relation to the migrations of the swarming locusts. They are not always present where the outbreaks occur and therefore  humans have resorted to using chemicals to protect crops and pastures (New Zealand Digital Library 2020).

The eggs of the locusts have an impermeable cuticle, are drought resistant and may live in the soil for about three years. Diapause eggs prevent immediate hatching, allowing the build-up of eggs in the soil over a period of time. These eggs only hatch when the moisture content of the soil is suitable. For a period of about 9 to 40 days, the eggs remain in diapause; once diapause is completed eggs may enter a stage of quiescence (dormancy), which can last for several years. Once the conditions are favorable, such as after heavy rains, the hatching cause outbreaks of locust swarms enabling them to migrate to alternative breeding sites.

Additionally, the foam covering an egg pod is reinforced with soil particles forming a hard case protecting eggs against compression and desiccation. This foam allows gaseous exchange between egg mass and the soil surface and is used also as an escape route during hatching. The desert locust has a relatively thinner and weaker froth plug compared to the brown locust (Kambule 2010).

Grasshoppers and locusts are both components of heathy and disturbed grassland ecosystems. The insects are abundant in natural and human-altered habitats like rangelands, wetlands, agricultural fields and lawns. They are known to stimulate plant growth, participate in nutrient cycling and play an important role in food chains. Some grasshoppers are proposed as ecological indicators of ecosystem qualities and efficacy of ecological networks (Latchininsky et al. 2011; Bazelet 2011).

Plaques of locusts date back to biblical times. Interestingly, the desert locust ancestry is proposed to have been in Africa, but it has managed to disperse over the Atlantic Ocean into the Americas where it gave rise to a total of 50 more species (Chapius et al. 2015; Song et al. 2017). Sheep grazing creates shorter and sparser grasses prefered by locusts and this in turn promotes outbreaks or colonisation (Le Gall et al. 2019).

The conservation status of the southern African desert locust has not been assessed.

Song et al. (2017) reported that there are about 50 species in the genus Schistocerca globally, and only three species are known to form swarms, i.e. S. gregaria (African species), S. piceiformis (Central American locust) and S. cancellata (South American Species). The desert locust (S. gregaria) is the earliest diverging lineage in the group, meaning that the ancestral Schistocerca originated in Africa and colonised the New World.

The study concluded that the ancestor of this genus had traits associated with phase polyphenism, which is the state of swarming behavior engineered by environmental phenotypic changes as opposed to gene-based polymorphism. The phase-based polyphenism appears to be an adaptation to the stresses imposed by intraspecific competition at high population density and tends to produce individuals that migrate en mass, presumably to escape the deteriorating conditions within their crowded local habitat (Sword 2003).

The researchers estimated the westward colonisation from Africa to America by the ancestral Schistocerca to be in the Pliocene, which is a period when continents were essentially identical to their current configuration (Song et al. 2017).

How did this subspecies occur in South Africa while the other is mainly found in northern Africa?

Chapius et al. (2019) concluded that the divergence of the South African subspecies of the desert locust is quite young, dating back to the 2.6 Ky, which is the present Holocene geological epoch. They proposed that the processes that led to the appearance of the subspecies flaviventris in the western side of South Africa were indicated to be related to the opening of the Sangha River Interval.

The geological and palynological (study of plant pollen) research indicated that there was a brief fragmentation of the African primary forest in the Holocene and this period was characterised by relatively warm temperatures and longer dry seasons rather than an arid climate. This period is not necessarily reported to correspond to a phase of general expansion of the savannas and grasslands but led to the opening of the Sangha River Interval (SRI) in the core of the tropical forest in Central Africa. The SRI corresponds to a 400 km wide open strip composed of savannas and grasslands dividing the rainforest in a north–south direction.

The SRI corridor is proposed to have facilitated the southern migration of the Bantu-speaking people, cattle and sheep farmers, along with cultivation of the semi-arid sub-Saharan cereal, pearl millet, Pennisetum glaucum. The Bantu expanded their habitation and reached the southern range of the desert locust. This could have not only created the suitable habitats for the locust but also provided the pathway for the divergence of the subspecies.

The disjunct distribution of the two subspecies is attributed to the reappearance of the forest vegetation that could have led to genetic differentiation of the southern populations from the northern parental populations. This proposed explanation including the climatic and habitat suitability of the SRI environmental disturbance to the species and the related southeastern colonisation through the corridor remains to be evaluated.