Skip to content
Home » Animal of the week » Edible stinkbug 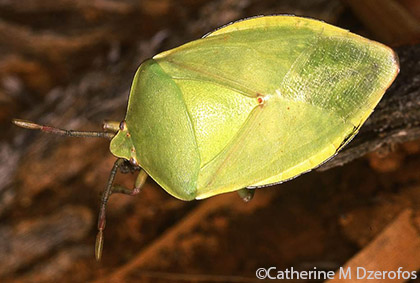 Insects account for more than 80% of all living animals on earth and have existed for over 500 million years. Their consumption by humans dates back to pre-biblical times (Leviticus 11: 21–23). There are over 1 900 species of insects that are known to be edible by people of different cultures around the world, with 102 belonging to the order Hemiptera (bugs). Amongst the 102 is the relatively large, shield-shaped edible stinkbug (Encosternum delegorguei) native to southern and central Africa. This species is a sought after delicacy in rural villagers in Malawi, South Africa and Zimbabwe. It is considered highly nutritious with proteins made up of essential amino acids (Teffo 2007).

How to recognise an edible stinkbug

Edible stinkbugs are light green-yellow, shield-shaped bugs with dorsally flattened bodies averaging 25 mm in length. Their heads are small and triangular with two brown shiny compound eyes and a pair of five segmented antennae. They possess forewings that are hardened at the base and membranous at the tips; the hardened bases are separated by a triangular scutellum. Nymphs are red and wingless.

They are strong fliers and will congregate in specific areas during the dry season. Villagers talk about swarms migrating to hilly areas and valleys. During the night and cold weather, they remain immobile in large clumps where they are vulnerable to being harvested.

Distribution of this species ranges from southern Africa northwards to the Democratic Republic of Congo. In southern Africa it is widely distributed within the tropical/subtropical woodlands and bushveld of South Africa, Botswana, Swaziland, Malawi, Mozambique and Namibia. South African populations have been recorded in the vicinity of Thohoyandou, Ga-Modjadji and Bushbuckridge.

They are plant eaters that feed on Combretum imberbe, Combretum molle, Peltophorum africanum and Dodonaea viscosa.

Reproduction is sexual. Mating occurs between mid-October and late November (spring) (Dzerefos et al. 2009). Hard-shelled eggs are laid and glued on the grass stems and twigs of food plants ten days after copulation and hatching occurs 18 days thereafter. Hatchlings are small and wingless nymphs that resemble adults except for the colour. Nymphs undergo four successive stages known as instars where they moult; changing colour and becoming more adult-like with wings.

The most important enemies of the edible stinkbug are humans who extensively harvest them for food. They are also preyed on by monkeys, birds and ants. Recently parasitoid wasps that prevent hatching of eggs have been documented (Dzerefos et al. 2009); the wasps lay their eggs in the eggs of the stinkbugs, and the wasp larvae feed on the embryo of the stinkbug eggs. Other than predators, they are faced with habitat degradation influenced by land use and felling of food trees.

Most food plants of the edible stinkbugs lose their leaves during the winter season. Consequently, these bugs are faced with reduced food sources. To combat these challenges, they secrete wax during winter to insulate their body, and undergo diapause during which they avoid feeding and only take in droplets of water. To fight against predators, the species employ a chemical defence mechanism.

It secretes chemicals that stain hands yellow or orange and has an unpleasant smell. The chemicals are also known to cause temporary blindness if they come into contact with the eyes. To increase their defences against predators, they aggregate in tree tops to combine their defence chemicals. The aggregation behaviour also helps in maintaining body temperature during winter and enhances mating opportunities during mating season.

Consumption of edible insects has been a major driver for plant conservation, with many plants conserved simply for the reason that they host a particular edible insect of significant value to consumers. Edible stinkbugs have been used to promote conservation of the Jiri forest of Zimbabwe. As a result of the human–forest–stinkbug relationship, the use of more than 10 indigenous plants species within this forest has been forbidden and deforestation has been avoided.

Most of the forbidden plants are those that these stinkbugs aggregate on. During the harvesting season of stinkbugs, a team of caretakers who ensure that ethical and sustainable harvesting is practiced in the Jiri Forest is employed by the Norumedzo villagers who are highly dependent on the forest. The awareness of cultural, social and religious significance of this species has played a great role in the conservation of this forest (Munyaradzi 2014).

Edible stinkbugs have been served as food in South Africa, Malawi and Zimbabwe for generations. In South Africa, they are a delicacy for the Venda people of Limpopo and for the Mapulana people of Mpumalanga. They are an important source of protein, vitamins and micro-elements. Their palatability depends on the successful removal of the bitter tasting and stinking defence chemicals. After they are harvested, the live stinkbugs are separated from the dead ones.

The heads of the dead ones are removed and the defence chemicals are squeezed out through the opening. The live ones are put in warm water and stirred. In distress, they secrete all their defence chemicals into the water and the water is discarded (this is repeated at least once). They are then boiled for several minutes before they are sun-dried. The dried ones can be fried with a little salt. Some people eat them dry as a snack. They also have increasing economic value for harvesters who sell them. I

n 2009 a cup of dried edible stinkbugs cost an average of R5.00, and then R10 in 2013 and this year (2015) a cup fetches an estimated R20.00 in Thohoyandou. Edible stinkbugs are also used to aid with digestion, act as appetizer and as a cure for hangovers.

This species has not been assessed according to the IUCN red list criteria and so its conservation status is unknown. In a global context, edible stinkbugs are widely distributed from southern Africa northwards to the Democratic Republic of Congo, but have only been documented as food in Malawi, Zimbabwe and South Africa. However, populations in South Africa not only face threats of habitat degradation, spread of invasive alien organisms, environmental pollution and pesticides, but could also succumb to over exploitation resulting from its increasing economic value.

Tessaratomidae is a family of true bugs consisting of about 56 genera recorded. The family is also referred to as giant shield bugs because of their relatively large bodies. They share a similar arrangement of piercing or sucking mouthparts known as the rostrum. E. delegorguei bear a striking resemblance in morphology to members of the family Pentatomidae such as Chinavia spp. and Nezara spp. They differ in that members of Pentatomidae have an enlarged triangular scutellum, which is extended to partially cover the wings.