Skip to content
Home » Animal of the week » Fiscal Flycatcher 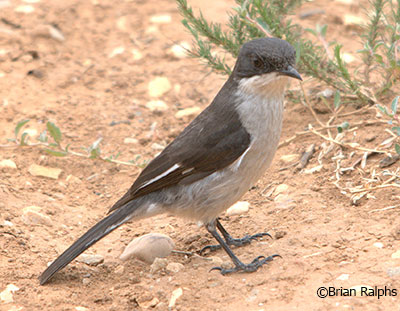 The species name silens is based on the Latin word for ‘silence’ or ‘resting’; describing these birds’ relatively quiet nature. The Fiscal Flycatcher gets its English and Afrikaans common names from its resemblance to the Common Fiscal, a species of shrike also found in southern Africa; which in turn gets its name from its suit-and-tie appearance reminiscent of the taxman (‘fiscal’).

The Fiscal Flycatcher is a quiet and well-presented black-and-white bird and the only species in its genus; the genus is therefore monospecific. There are, however, two regional subspecies.

How to recognise a Fiscal Flycatcher

The Fiscal Flycatcher is smaller (17–20cm) and less aggressive than its shrike look-alike – the Common Fiscal – despite being similar in many other attributes such as perching and hunting habits. Males are black on the dorsal side and white ventrally with a white wing marking about midway down the wing. They also have white feathers visible on both sides of the tail when the bird is perching. Females and juveniles are similar in appearance to the males but are a more blackish- or greyish-brown rather than pure black; juveniles are often duller and more mottled than females. The species’ eyes, bill, feet and legs are black.

An easy way to distinguish the Fiscal Flycatcher from the Common Fiscal is by the Common Fiscal’s stronger hook on the bill and the white, V-shaped shoulder (vs. lower wing) markings. The shrike also has a longer tail without white sides. There are two subspecies of Fiscal Flycatcher. Sigelus silens silens is more widespread than S. s. lawsoni. The differences in colouration between the two are subtle; the throat and sides of the breast are darker in S. s. silens. There is genetic and morphological evidence of interbreeding between the two subspecies.

Much of the Fiscal Flycatcher’s time is spent going between perching and flying. While most Fiscal Flycatchers are resident and do not move great distances, they can potentially move very far. Resident populations in some parts migrate annually to lowland and coastal areas during the winter period. Some of the largest movements recorded for ringed birds include 30 km and 63 km, and there is even an observation of a bird 100 km out at sea, which did not stop to rest on the boat or look tired!

The Fiscal Flycatcher is mostly silent and the females are almost always so. The male’s call is typically a weak, thin series of high-pitched ‘tswee’ and ‘sooo’ notes. Calls are usually made from atop a prominent perch such as a tree, fence post or telephone pole, and it is from this position that the bird is thought to advertise its presence in its territory and keep an eye out for both predators and potential prey.

When out of breeding season, the males may imitate several other bird species in their calls. One male was recorded imitating a White-faced Whistling Duck, House Sparrow, Red-faced Mousebird, White-bellied Sunbird, European Bee-eater and Cape Robin-Chat. The imitation of the latter was so good that it elicited territorial aggression from the Cape Robin-Chat (who, presumably, was expecting to see another Cape Robin-Chat in his territory).

Listen to the call of a Fiscal Flycatcher here: https://www.youtube.com/watch?v=Q6Qz-NGjUdc.

The Fiscal Flycatcher is endemic (or restricted) to southern Africa; this includes much of South Africa, Lesotho and Swaziland, but also the southern parts of Botswana and Mozambique. The species is a resident in many parts of its distribution, meaning that it is found there throughout the year while it is a non-resident in other parts. In central and northern Botswana they are usually only seen during winter, starting from mid-March to mid-September.

In much of its eastern range, the species migrates to low and mid-altitude areas such as lowland and/or coastal habitats during the winter time. The more wide-spread of the two subspecies is S. s. silens; S. s. lawsoni is largely a resident and more restricted to the Northern Cape, North West and Free State provinces of South Africa as well as further north.

In Namibia the species is a vagrant; meaning birds have been seen there, but they were very far from their usual distribution.

The Fiscal Flycatcher is typically a resident of open habitat types with scattered trees and bushes such as moist and semi-arid lowland grasslands, woodlands and savannas as well as fynbos and Nama Karoo biomes. In the highlands, Fiscal Flycatchers are rare in rural areas, but are common when alien trees are available. In the Eastern Cape and areas of the Karoo, the species seems to prefer the ecotone vegetation between thicker bush, which is used for nesting, and the more open habitat, which is used for foraging.

Across its distribution, there are populations which are partial migrants – moving between habitat types as seasons change. In parts of the Western Cape and the southern Karoo, the birds may be residents in suburban gardens, whereas elsewhere they mostly use gardens in the winter time.

Though largely insectivorous, the bird does supplement its diet with fruit and other food. The birds are often seen pouncing on prey from a high perch (> 4 m, usually), but also hawking insects from the air, and, less often, gleaning insects from foliage.

They are also seen in mixed-species foraging flocks associated with the emergence of winged termite (alate) and half-asleep (torpid ) ants on the ground. Earthworms, grasshoppers, moths and bugs have also been recorded in the birds’ diet. Plant material is typically fruit from several species of indigenous and alien trees, but they have also been recorded taking nectar from mountain aloes (Aloe marlothii). More unusual observations include bone meal and dog food (in suburbs) as well as a fledgling Cape Wagtail (Motacilla capensis).

Fiscal Flycatchers are monogamous solitary nesters. To impress the female, the male will present her a piece of soft plant material. While presenting, he will keep his wings and head low and his tail in the air and sing ‘gently’. The male repeats this with a different gift each time; if the female is interested, she will inspect the gifts and then she might join him. The nest, built by the female alone, is a robust open cup made of a combination of grass stalks, everlastings, slangbos and other plant material.

Near urban areas the birds may include scrap materials. The inside of the nests are thickly lined with soft materials such as down feathers, rootlets, soft plants, old man’s hair (lichen), wool and even real hair. There is a record of a bird trying to pluck hair out of a man’s head, presumably for nest lining.

The female may lay two to four eggs during the period between July and February, with the peak egg-laying period around October to December. Incubation is undertaken solely by the female. Incubation lasts 13–16 days and during this time the male feeds the female, however the female does leave the nest for lengthy periods.

Fiscal Flycatchers are territorial in the summer and usually live in pairs for this time. Though the species is not very territorial, they will aggressively chase conspecifics (individuals of the same species) out of their home range. Once the chicks have hatched, the father shows little interest in the young and soon leaves the nest. The mother continues to feed the fledglings after they leave the nest.

In the winter, Fiscal Flycatchers may be gregarious, particularly around food sources such as fruit trees; some groups may be as large as 10 birds.

Fiscal Flycatchers have been recorded as prey of domestic cats, Ovambo Sparrowhawks (Accipiter ovampensis) and the nestlings have been taken by the Common Fiscal. The birds are undoubtedly also taken by other predators such as snakes.

Jacobin and Red-chested cuckoo are recorded brood parasites of the Fiscal Flycatcher. These birds lay their eggs in the flycatchers’ nests when the parents are away, leaving the flycatcher to raise their young.

There are surprisingly few records of the Common Fiscal competing with the Fiscal Flycatcher for either food or perch considering their similar appearance, foraging habits and their co-occurrence across southern Africa.

Imitating the calls of other birds is a talent many bird species have but its ecological use is still not clear. There are several possible reasons for the behaviour. Having an impressive repertoire may help males attract females. Being able to imitate other species may also help defend ones territory from other species by, in a way, ‘speaking their language’. For example, the Cape Robin-Chat, which responded aggressively to the Fiscal Flycatcher’s imitation.

Fiscal Flycatchers are important insectivores; together with other bird species they help control ant, termite, moths, mealy bugs and other ‘pest’ species. Without such birds there would be a predator release for the insects and pest populations would increase. They are important disperses of seeds for many indigenous plant species including Chrysanthemoides monolifera and Halleria lucida. They also spread the seeds of invasive problem species such as Euonymus spp. and Cotoneaster pannosus.

Non-resident populations in some parts make use of suburban gardens as an over-winter home. Fiscal Flycatchers are attractive and lovely birds to have in one’s garden. In addition to controlling pest insects in the garden, they can also be entertaining to watch. There are several videos of the Fiscal Flycatcher on YouTube and 94 observations on iSpot:

The species is widespread within southern Africa and can be locally abundant, and as such it is listed as Least Concern by the IUCN. Fiscal Flycatchers may be quite adaptable, considering that it is common in protected areas, but more abundant outside of protected areas than has been historically recorded. The availability of man-modified environments has facilitated this abundance. This includes the introduction and growing of large alien trees, the maintenance of large open fields (sports fields, playgrounds, lawns etc.), providing that combination of scattered trees in an open habitat that they require. In Port Elizabeth, a Fiscal Flycatcher nest was found made almost entirely of scraps from a rubbish dump.

The Muscicapidae is a large family of ± 16 genera and 135 species, and together they make up the ‘old world flycatchers’. This family is largely restricted to the old world (Africa, Europe and Asia). While the Fiscal Flycatchers is alone in its genus, there are six genera in the African flycatchers, of which the closest relatives to the genus Sigelus are Empidomis (e.g. the East African Silverbird, E. semipartitus) and Melaenornis (e.g. Southern Black Flycatcher, M. pammelaina).