Skip to content
Home » Animal of the week » Guttural toad 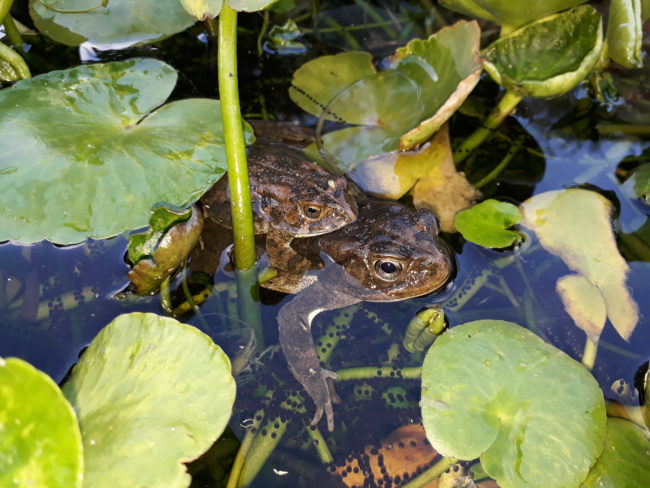 Derivation of scientific name (if known) The species name gutturalis derives from the loud calls of the guttural toad.

The guttural toad is very common. It is spreading throughout southern Africa as its population increases. It can live in a variety of environments and is very adaptable. It has no major predators and does not suffer much from habitat loss. The rapid increase of this toad poses a threat to the wildlife in the Western Cape, such as to the western leopard toad, Amietophrynus pantherinus.

The guttural toad is a large species with males growing to a snout-to-vent length of up to 90 mm and females 120 mm. The upper surface is buffish brown with variable irregular dark brown markings. There are two pairs of brown spots between the eyes making a cross-like mark, and there is often a pale stripe down the spine. The arms are edged by distinctive white tubercles and there is a red patch on the back of the thighs. The underparts are pale and granular and the male has a dark throat. The parotid glands (found behind the eyes on toads, some frogs and salamanders) are prominent and the toes are only slightly webbed. There are separate bands of white tubercles underneath the leg. There are no warts in the large parotid glands behind both ears. The back of the guttural toad is adorned with a bilateral pattern outlined in dark brown. There is a a faint vertebral line running down the back. The underside of the guttural toad is whitish and in breeding season red patches can be seen behind the thighs. Male guttural toads have darker throats during breeding season. If the guttural toad feels threatened, it may secrete a white, milky fluid from the parotid glands.

Guttural toads are terrestrial, but they occur in or around water bodies such as ponds. They forage at night and seek shelter under rocks, logs and in between gutters during the day. The guttural toad moves fast from one area to another, on paved surfaces and in dense vegetation.

Male guttural toads call from breeding pools that are permanent and temporary. The calls are louder in October and November, just after the first rains, but they call throughout the year. The call is loud with a slow throbbing snore; it is said it sounds like something being cut “rrrrrrr rrrrrrr”. The female guttural toad selects a male based on his call, which she is attracted to. 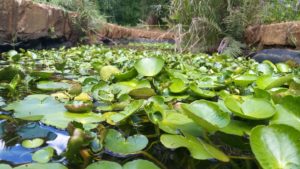 The guttural toad occurs in thickets, savannahs, grasslands and is common in urban areas where there are garden ponds. During the day they seek out shady places such as under rocks or logs.

Guttural toad feeds on lizards, insects and also other frogs such as the common squeaker, Arthroleptis stenodactylus, which is found in sub-Saharan Africa.

Sex: It has been recorded that the guttural toad breeds in late July and early August, the end of September to November is the peak breeding time. Females can lay between 15 000 and 25 000 eggs per clutch and each egg is 1.4–1.5 mm in diameter. Eggs are laid around vegetation in pools, usually at the edge, and the eggs are produced in two 5 mm diameter gelatinous strings. Eggs hatch after a week and after two months they begin to develop back legs and later front legs (metamorphosis). The guttural toad can live up to seven years.

Family life: The guttural toad population and its spatial distribution emerges every year. Adult and juvenile guttural toads can disperse across the pond, but only adults can breed.

Guttural toads can easily adapt to most environments, including urban areas.

In Taita Hills, Wundanyi, Kenya, the community frequently come across the guttural toad and this explains it’s Kitaita name ‘Kiwandu’, which means ‘the people’s frog’.

On the IUCN Red List, the conservation status of the guttural toad is Least Concern, regionallyand globally. There are no known threats to the guttural toad, but they do pose a threat to the western leopard toad by competing for resources.