Skip to content
Home » Animal of the week » Hamerkop 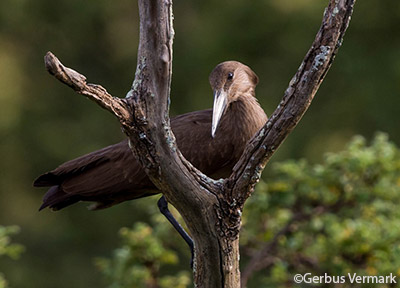 The species name, umbretta, is Latin meaning shade or shady; possibly either referring to the dusky brown colour of the Hamerkop or to the crest and bill, which give the head an almost umbrella-like appearance. The English common name, Hamerkop, has been assimilated from Afrikaans, and the name literally means ‘hammerhead’ – also referring to the crest and bill that give the head a hammer-like appearance.

The Hamerkop is a medium-sized, dusky brown-coloured bird with a characteristic head that makes it unmistakable, even for novice birders. It resides near water where it hunts for prey such as tadpoles, small fish, insects, shrimp and other invertebrates. Some indigenous cultures in South Africa see the Hamerkop as an ill omen and it features prominently in Xhosa and other folklore. However, despite this rather unfortunate view of the very interesting and unique Hamerkop, it is traditionally held in awe and not molested for being perceived as an ‘ill omen’.

How to recognise a Hamerkop

The Hamerkop is an unusual-looking, dark dusky brown, medium-sized bird with long legs. It weighs about 470 g (female) to 530 g (male), stands about 50 cm tall and has a generally heron-like shape. It has a heavy crest and a flattened, boat-shaped, black bill. The profile of the head looks like a hammer, but is often hidden when the neck is drawn back and the crest rests on its back. The Hamerkop is the only member of the family Scopidae.

Hamerkops are usually found in pairs or small displaying groups and are often seen patrolling roads in the early morning, searching for road-kill like amphibians. They also wade shallow water, and love shallow rapids, where they can be observed to shuffle their feet, probably to disturb hidden prey.

They will often stand on the backs of wallowing hippopotamus and sometimes use these animals as hunting platforms. Their flight is also distinctive, with the neck partially drawn back and a characteristic appearance given by the disproportionately large wings and head and small body – the overall impression being rather owl-like. In display, elaborate dancing movement occur accompanied by bowing and wing-flapping, while making a yapping, cackling call.

The bird is quite noisy and one often hears it before seeing it. In flight single birds utter a plaintive ‘keep’, followed at intervals of a few seconds by other individual notes. They make a loud and discordant yip-purr chorus in social displays away from the nesting site, and also a variety of sharp querulous squawks and a drawn-out reedy trill.

The Hamerkop has a wide range in the Ethiopian, Malagasy and South African zoogeographical regions, extending from southwest Arabia through much of tropical Africa and Madagascar to South Africa. The subspecies Scopus umbretta minor has a restricted range in coastal areas of West Africa from Senegal to Nigeria. The more widespread subspecies, S. umbretta umbretta, occupies the remainder of the range, from Arabia to the Western Cape and Madagascar.

The typical habitat consists of marshes, mangrove swamps and the edge of the lakes, streams and rivers, generally with trees nearby .The Hamerkop is non migratory. Their nests are huge (up to 2 m in diameter and in height), domed structures made of sticks, with a small side entrance, usually in a sturdy tree or on cliff ledge. A productive wetland area that incorporates a pond will encourage Hamerkops to visit the garden.

Hamerkops feed on frogs and tadpoles, especially platannas (Xenopus spp.), small fish and mammals, and aquatic invertebrates. The Hamerkop’s distribution closely correlates with that of Xenopus, which suggest that they are reliant on platannas for a reliable food source. They use several foraging techniques, including standing and waiting at the water’s edge, snatching prey from water or land; wading in shallow water, mud or rapids; and they will also hawk by flying just above the water and snatching prey on the surface. They will also hunt from the back of hippos, and will follow cattle or buffalo, preying on the grasshoppers that get flushed by the moving bovines. They young are fed mainly on tadpoles.

They live in monogamous relationships, which mean an individual has only one partner during his or her life time. Hamerkops breed singly and lay 3–9 eggs in their huge nests. Eggs are seldom left alone, but nestlings may be left for long periods of time while the adults forage. Incubation usually only starts once the third egg has been laid. Nests, when not disturbed, may be used for up to four consecutive years. Western Barn Owls prey on the nestlings.

During courtship, the male and female will make rapid flights towards each other; bow or nod to each other; run towards each other with drooping wings and with crests rising and falling; and run in circles side-by-side while making repeated false mountings. The displays are accompanied by loud, trilling, hysterical-sounding yip-purr calls. Actual copulation may occur after a succession of false mountings and usually takes place on or near the nest.

Social interaction in which several birds participate, frequently occur and usually involve false mountings, when some stand on back of the others and then change around at random. Sometimes mounted birds may even face wrong direction .This gatherings are accompanied by loud, excited calling. Despite this form of social interaction, Hamerkops are considered to be monogamous and there is only one record of helpers bringing sticks to a nest.

Despite their effort in making their unique nests, Hamerkops often lose their nest due to squatters like bees, Barn Owls or occasionally Dickinson’s Kestrels, which occupy the inside of the nests, while Egyptian Geese and other ducks, and Verreaux’s Eagle Owls sometimes breed on top of the structures.

The Hamerkop has a varied approach to finding and apprehending prey which contributes to its success in the environment. It has a specialised bill-structure, which includes a hooked tip that allows it to grab onto prey with its beak and ‘hook’ it out of surrounding vegetation so that the Hamerkop can eat it.

They use a technique called ‘foot-trembling’ to dislodge prey from overhangs in tidal pools. They hunt from the back of hippos or follow banded mongoose around when these feed near a water hole. They also, like Cattle Egret, follow cattle or buffalo herds, preying on grasshoppers and other insects that get flushed from the grass by the moving bovines.

Hamerkops are known for the huge nests that they build. These nests form habitats and shelter for many other species, including Western Barn Owls, Egyptian Geese and other birds, insects such as bees, and various mammal species.

The huge nest of the Hamerkop is probably one of the reasons why the bird is treated with awe and respect by many indigenous people throughout its extensive African range.

In Zulu culture, it is believed that the bird possesses burning power. It is said that if one abuses or destroys a Hamerkop nest, their home will burn down within one day. Coincidence or not, this has, according to legend, occurred many times, and as a result uThekwane is highly respected by Zulu hunters.

The Hamerkop is also known as the ‘lightning bird’, and the Kalahari Bushmen traditionally believed that being hit by lightning was a direct result of trying to rob a Hamerkop’s nest.

This species is potentially threatened by deterioration in wetland water quality caused by excessive pesticide utilisation and sewage spillage into fresh water systems. The species is also hunted and traded for traditional medicine markets in Nigeria. The bird is currently classed as Least Concern by the IUCN.

The Hamerkop is usually included in the Ciconiiformes (storks), but might be closer to the Pelecaniformes (pelicans) and some authorities prefer to include it here. The Hamerkop is the only member of the monotypic (single member) family Scopidae and the monotypic genus Scopus, because of its unique characteristics. It has no known extant close relatives.