Skip to content
Home » Animal of the week » Helmeted Guinea-fowl 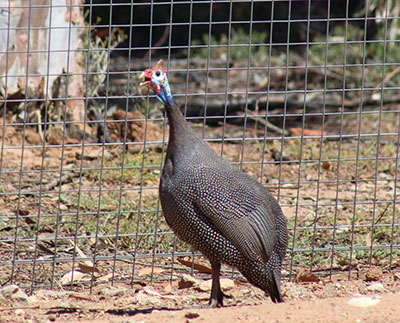 The Helmeted Guinea-fowl is widely distributed throughout southern Africa and was traditionally hunted for sport. People often marvel at these birds with their black-grey bodies, unmistakable colourful head and featherless crown. They usually form relatively stable flocks of 15 to 40 birds during non-breeding season and are often a familiar sight in suburban parks and gardens. Guinea-fowl are very social birds, and  walk long distances a day in search of food. They can also be territorial and protective of their young. Like chickens, they roost in trees at night to avoid any predators. Guinea-fowl are seen as a nuisance on the road, and can be domesticated.

How to recognise a Helmeted Guinea-fowl

These large, chicken-liked birds can easily be recognised by their relatively large size (53–58 cm), dark grey bodies with white speckles and by their featherless, helmet-like head, which is blue and red in colour. Males have a bigger helmet than the females. These birds also have short, rounded wings and tail feathers. The short beaks are accompanied by hanging wattles that surround the nostrils. Feet consist of three front toes and one hind toe.

Helmeted Guinea-fowl are predominately ground scavengers and this is where they will spend most of their time. They prefer to walk rather than fly and can walk up to 10 km a day. They can fly, but will use this option only when they are in danger or to get up to their roosts for the night. These flights are usually very short, not more than about 100 m.

Helmeted Guinea-fowl make a harsh, loud sound during breeding season to attract a partner. They also make a different harsh noise when in danger. Males tend to puff up their feathers and lift their wings during combat, which is very seldom. Males will also challenge any intruders that come too close.

The species is widely distributed in southern Africa, occurring throughout the whole of South Africa, with a small population towards the Northern Cape. They tend to avoid arid areas and rain forests.

Habitat
Guineafowl are adapted to roam in any kind of habitat and are commonly seen. Most of them prefer grasslands, thorn veld and agricultural land. They do well in open areas. They are not migratory birds, but they do move around more during breeding time. Helmeted Guinea-fowl tend to roost in trees at night to avoid any attacks by predators.

The adult males will groom themselves during social get-togethers and take dust baths in the soil. During the quieter time of the day these birds will rest under cover. The females are mostly responsible for choosing the nesting site. They will usually just scrape twigs and grasses together and line the nests with soft plant material and feathers. These nests will always be concealed.

During breeding season both partners will call to each other at the same time, almost as if singing a duet. After breeding the males will spend the majority of their time defending and feeding the female and will lose a lot of weight and condition. This method ensures that the female will be strong enough to breed successfully. The females will gain a lot of weight during this time. Some females will lay their eggs in another nest to be incubated by the owner of the nest. This process is called egg-dumping. It is a common occurrence in guinea-fowl females as the incubation period only starts when the last egg is laid. The incubation period last 25 to 29 days. Baby guinea-fowl can leave the nest immediately and are called keets. Guinea-fowl can live up to 12 years.

Guinea-fowl flock in large groups. They live in large communities and are very social. Males dominate in the community and settle their differences by chasing each other. In the end, the male with the highest endurance and fitness claims the no. 1 spot. It is interesting that both sexes will fight for territory in the community. Males will also guard the eggs before incubation, but will leave as soon as the incubation period starts, in search of other females. He will then return as soon as the eggs have hatched. He plays a major part in teaching the keets what to eat. If he does not return, many of the keets will die as the mother will not have enough time to look after them and herself after the incubation period. In large communities, flocks of keets are sometimes raised by different parents.

Social interaction with other species in the wild is rare. Guinea-fowl do fall prey to birds-of-prey such as eagles and owls.

The eggs of guinea-fowl have a very hard cover to protect them from predators. The eggs also hatch more-or-less at the same time, thus avoiding any interference from predators due to noises associated with hatching at different times.

Guinea-fowl consume a large number of insects and most importantly ticks, which can spread a variety of diseases.

People & I
In the past these game birds were traditionally hunted for sport. The males can be very aggressive when looking after the young. People should thus avoid interaction with these birds when the young keets are close. Males tend to attack any intruders.

This species is considered Least Concern. They are local residents over most of South Africa.

There are six species in the genus. Two of these species are confined to southern Africa, including the Helmeted Guinea-fowl. The Crested Guinea-fowl also occurs in South Africa. Closely related relatives include spurfowl and francolins.