Skip to content
Home » Animal of the week » House crow 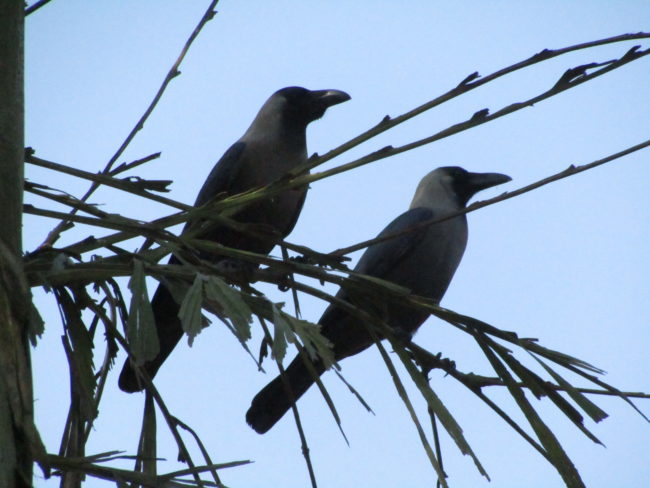 Description/How to recognize a House Crow

A House Crow is a slender bird with a head to tail length of about 40 cm and black-brown eyes. it has a black head with grey neck/collar;sides of head and the breast varies in different races; glossy black back and wings, and black legs. It has a relatively large bill and long legs. An adult House Crow  weighs approximately 245 to 371 g. Male and females are similar in appearance however, males are slightly larger. Their juveniles are duller than adults (Madge and Burn 1994; Dean 2005).

Getting around
A House Crow gets around by flying. However, in countries such as Tanzania (Shimba & Jonah 2017), Socotra Island (Yemen) in 1995, and Malaysia (Suliman et al. 2011) it was reported that they were introduced unintentionally, often through ships as hitchhikers. 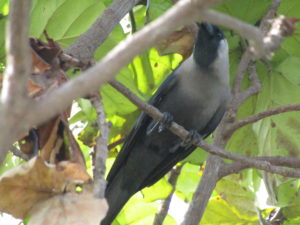 House Crowsare native to and widely distributed in Southern Asia, which includes Nepal, Bangladesh, India, Pakistan, Sri Lanka, Maldives, Laccadive, Myanmar, Qatar, Singapore, and southwest Thailand and coastal southern Iran (Meininger et al. 1980; Nyári et al. 2006; Ryall 2010). However, it was introduced in South Africa, Durban in 1972 and Cape Town in 1977 (Allan & Davies 2005). It is distributed in Durban and northwards from Durban to Richards Bay. It is also found in East London and Cape Town (Nxele & Shivambu 2018).

House Crows inhabit areas associated with human settlement in both urban and rural areas (Suliman et al. 2011). They are also distributed in disturbed areas, coastal settlements and farmlands (Akram et al. 2013; Shimba and Jonah 2015). They nest in telephone lines, television antenae and some trees across their range (Behrouzi-Rad 2010). They are known to be competitors of other corvids as well as other native birds for food, nesting sites and space (Ryall 1992; Chongomwa 2011).

House crows are omnivorous and opportunistic animals. They predate on small vertebrates and invertebrates, which include birds, mammals and reptiles. They also feed on fruits and raid crops (Suliman et al. 2011; Koul & Sahi 2013). They are considered as scavengers in the cities where they feed on human food leftovers and drink water from swimming pools (Brook et al. 2003; Wilson et al. 2013; Fraser et al. 2015).

Sex and family life: House Crows mate through sexual reproduction in which they produce a clutch size of three to five pale, blue-green, speckled with streaked brown eggs. They produce two clutches per year. They breed from March/April to July/August and in some areas, they breed between October and January (Allan & Davies 2005; Dean 2005). Two to threeeggs  hatched successfully per clutch(Allan and Davies 2005; Dean 2005). The nest is incubated by both sexes between 16 -and17 days, however, females mainly incubate at night  (Snow et al. 1997; Dean 2005). 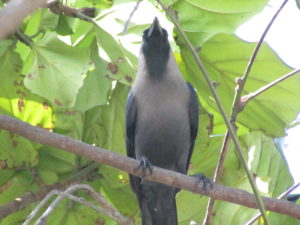 A House Crow is regarded as an invasive species in South Africa because it mostly affects the ecosystem negatively (Allan & Davies 2005; Nxele & Shivambu 2018; Shivambu et al. 2020b).

They have a high reproduction potential. They are highly adaptable to different environments,are highly mobile, they are omnivorous opportunists, and they benefit from human presence.

The poorer world without me

In some areas, they were introduced to control agricultural and house pests such as rodents and to provide cleaning up services / garbage elimination through scavenging in cities (Brook et al. 2003; Fraser et al. 2015). 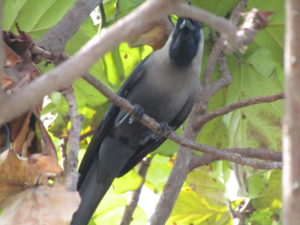 The House Crow is listed as Least Concern on the IUCN Red List of Threatened Species. In South Africa they are listed as a Category 1a invasive species in the National Environmental Management: Biodiversity Act, Alien and Invasive Species Regulations.