Skip to content
Home » Animal of the week » Hover flies 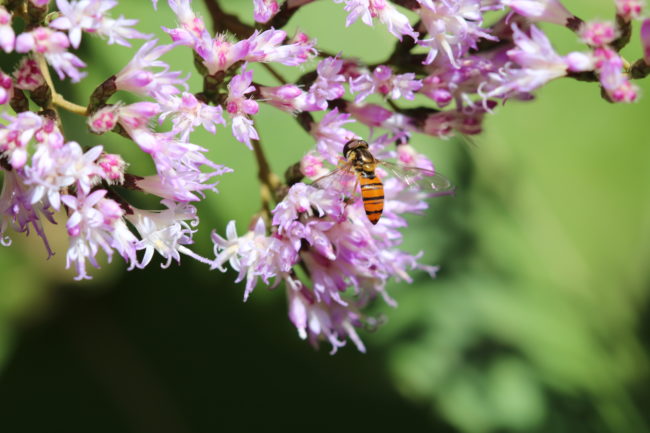 Hover flies are among the most important pollinators globally, providing pollination services to many crops and natural vegetation. About 230 species have been described within the southern African region, whereas the description at a global level is around 6 000 species. Hover flies get their name from the unique ability to hover in mid-air and above flowers. 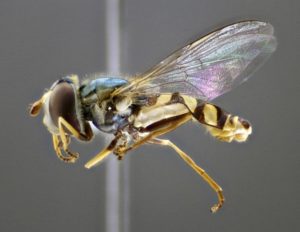 Hover flies are generally small in size with wing spans ranging between 18 and 20 mm. The wing dimension as well as body shape and size (elongated, slender, etc.) may vary across the different genera. The wings have a false margin towards the edge, formed by veins running parallel to the wing margin. This feature makes for easy identification and grouping from other flies. A common feature across the genera is the black and yellow stripes covering the body. And this at times leads to their being confused with bees or wasps. Most hover fly species hardly have any hairs on their bodies, therefore appearing to be brightly coloured and shiny. The abdominal shape can be rounded, or slightly slender and elongated – this varies across the different genera.

The eyes are large, especially in males, and often joined on top of the head. In females, the eyes are slightly smaller and not joined at the head. In some genera (e.g. Asarkina), the eyes are large and red in colour. In contrast, the Eristalinus genus have black barred eyes. The mouthparts (proboscis) are not considerably long but can be extended during foraging to reach into flower parts. The antennae are small and located in front of the head. Like most insects, the legs are noticeably longer and thinner.

Hover files have one pair of wings, which are often clear or may have smooth gradients of dark brown, yellow or black tinting. Their flight is mainly characterised by the hovering pattern – as their name suggests – and they often hang idly in one spot for short periods of time. They are capable of high-speed flights (up to 40 km/h) in any direction, generating aggressive buzzes, and they possess the ability to fly backwards.

Not much is known about the communication modes and/or types among the different hover fly species. But like most insects, they are believed to dependent on chemical communication for activities such as mate finding or host location. One element that has been studied in a bit of detail, is their response to enemy/predator attacks. It is suggested that when attacked, they respond with sounds that resemble the warning or startle sounds of wasps and honeybees. However, the level of similarity of both the pitch and frequencies of these sounds is not fully understood.

Hover flies occur widely throughout the world. However, they are reported not to favour desert-like environments (e.g. extremely dry and hot environments), very low to freezing temperatures (e.g. Arctic regions) or high-altitude areas. Also, different species tend to prefer certain types of habitat and thus are often limited to a distinct ranges within a particular country. For example, the Asarkina and Eristalinus genera are found in eight provinces of South Africa, apart from the Northern Cape – which is  arid and characterised by high temperatures.

Hover flies can be found in a wide range of habitats; from forests to different types of bushvelds and home gardens. However, ideal habitat preferences may differ largely between species depending on their preferences across geographical region. For example, a study conducted in Athens (Greece) found seasonal variation as well as floral composition to be key drivers when it comes to habitat preference for different species. Similarly, a study in Iran looked at hover fly communities in four different habitat types: fruit gardens, rice fields, woodlands and riversides. Some form of niche partition (habitat/environmental preference) was prevalent as the riverside proved suitable for both aquatic and semi-aquatic hoverflies. At the same time, the majority of the hover flies found the fruit garden and woodland suitable for foraging and shelter. Therefore, another added element to habitat choice could be the desire to meet different needs during the different life stages.

Adults feed on pollen and nectar of several flowering plants. The proboscis is used for nectar feeding in flowers, while in hovering mode or resting on the flower. The larvae (immature stages) are predatory and feed on aphids or other soft-bodied arthropods. For the aquatic and semi-aquatic species, muddy areas in ponds and rivers are preferred to catch prey. These species have a specialised tube-like telescopic tail, which is used for breathing in and around the water body.

Hover flies live for about a month and their life cycle takes place in four stages. The stages include egg, larva, pupa and imago (last stage in attaining maturity). Research has shown that hover fly life cycles may differ strongly with the variations in seasonal cycles. For example, in summer the cycle might be shorter (about three weeks) and in winter quite a bit longer (approximately nine weeks). The availability of good floral resources (nectar and pollen) usually triggers the mating season for hover flies. The female can lay up to 100 eggs during her lifetime (up to one month).

Sex: Mating between the male and female take place in flight or in the resting position on a flower or twig. The male initiates courtship and approaches the female from the back to mate. It is common for females to try and escape mating by flying away. If or when mating is successful, the female will lay the fertilised eggs (which are whitish in colour and appear to be elongated-ovals) on plant leaves or shoots so that the larvae can gain good access to food upon hatching. The emerging larvae, legless and maggot-like, feeds on plant leaves and aphids. After a week of feeding, the larvae fall to the soil and pupate for about two weeks. The pupae gradually changes colour from green to that of an adult hover fly. During this transition, it also loses its appearance of being rectangular (oblong) and pear-shaped.

Family life: Hover flies usually build their nests in trees or other appealing spots in their habitat. The nests can be anything from decaying wood to old abandonment tree holes. Hoverflies are generally solitary but have often been observed in high numbers during foraging or short migrations. 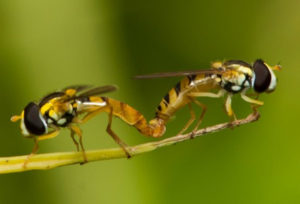 There are several predators of hover flies. These range from birds to spiders and wasps. These predators can distinguish the hover fly’s mimicry from that of bees and wasps (black and yellow stripes) for easy hunting. Hover flies themselves may occur in high densities and be dominant under certain climatic or resource availability conditions, and therefore have the potential to increase inter-specific competition for food or other resources with other flower fly species.

Hover flies mimic bees, wasps and a few other insects to put off predators. The beneficial striped colouring of black and yellow not only makes them fit the description, but also misleads predators into thinking they can sting or bite. Hover flies have also been observed to quickly accelerate or take off in flight to avoid approaching predators. It is suspected that they can somehow sense the intruder as the escape manoeuvre is always in the opposite direction of the predator. In other documentation on survival strategies, the hoverfly larvae have been reported to develop an immune response to deter attacks from wasps. The larvae secrete poisonous compounds from specialised cells to kill the predatory wasp.

Hover flies provide important ecological services for various agricultural crops and native wild plant species in many ecosystems globally. This has earned them a status of being considered the second-most important pollinator after bees. This further emphasises their contribution towards sustaining natural and agricultural landscapes. In various instances, the larvae have been documented to play a major role in the biological control of important pests within agricultural landscapes. They prey heavily on aphids, leafhoppers, white flies and scale insects, which are known to cause massive damage in crop systems. The larvae can consume between 70 and 100% of the aphid population in their vicinity.

There are no documented negative impacts associated with hover flies when it comes to their interactions with humans. Also, it is not known if they are eaten or domesticated in any manner. What is clear is their importance for pollination and as biological control – both aspects are of great benefit to humans. 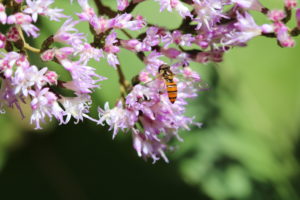 The conservation status for hover flies has not been determined. Most studies suggest that they are widespread and not threatened. However, like most insect pollinators, they are under severe pressure from habitat fragmentation, the widespread use of agricultural pesticides, the decline in desired forage areas, and other climate change–related impacts such as dry and hot weather conditions. Hoverflies are generally not adapted to high temperatures and conditions of aridity – bearing in mind that this might also not apply to all species, depending on their geographic distribution and habitat requirements. The newly established Hoverfly Specialist Group (HSG), under the International Union for Conservation of Nature (IUCN) is expected to carry out essential work on these species for better assessment.

Hover flies belong to one of the largest orders, Diptera, with about 16 000 known species. Their family, Syrphidae (with more than 6 000 species), is among the three major groups of flies. Some of the families within this group include Phoridae (coffin flies), Conopidae (big-headed flies) and Tephritidae (fruit flies). A common feature among the fly families is probably their high flower visitation rate, which to some degree still requires more documentation and research.