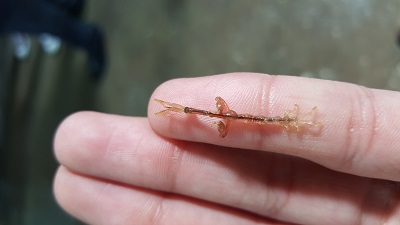 Japanese skeleton shrimp have a very slender built, similar to that of a stick insect and they are therefore commonly referred to as ‘skeleton’ or ‘ghost’ shrimps. Native to the subarctic regions of the Sea of Japan, they have become invasive in the North Atlantic, North Pacific, along the coasts of New Zealand and recently have also been found in South African waters.

The adult Caprella mutica, commonly known as the Japanese skeleton shrimp, are green and red to orange in colour along their entire elongated bodies. The body is slender with a stick insect-like appearance. Females have a dark red spotted pouch where they carry their eggs (Pinney 2009). Japanese skeleton shrimp males are about 25–30 mm and females about 15–20 mm in length. In males, the first two segments of the thorax as well as the second pair of claws are covered with dense hair-like structures.

On the upper and side surfaces of the third to seventh segment of the thorax (in females: first to seventh), it is heavily protected with spiny projections. The paired spines are particularly found on the upper surfaces, from the head to the tail region. This caprellid is also recognised by the several spines at the base of each gill (Boos et al. 2011).

Caprellids move by quick, jerky movements involving the sudden flexing and straightening of the body (Keith 1971).

Male Japanese skeleton shrimps guard their mate for a short period of time (about 15 minutes) before abandoning their position or are fought off by the females, which worsens their aggressive behaviour toward their own mates. This behaviour may include mating behaviour, male–male competition, as well as maternal care (Boos et al. 2011).

The Japanese skeleton shrimp is indigenous to subarctic regions of the Sea of Japan and parts of the northeast Pacific Ocean. It has, especially in the last few decades, established population on the Pacific and Atlantic coasts of the United States and Canada, Netherlands, Norway, Germany, Belgium, Ireland and Scotland, southeastern North Sea, New Zealand (Buschbaum & Gutow 2005; Boos et al. 2011), and has recently also been found along the South African coast (Peters & Robinson 2017).

In its native range, the Japanese skeleton shrimp is typically reported from sheltered bays in the littoral zone to about 13 m deep, and camouflage themselves amongst different macroalgae. In its European range, its habitat preferences include soft structures (e.g. tunicates and macroalgae), fine filamentous structures (e.g. turf-like bryozoans and hydroids) and filamentous algae, to which it can grasp. Additionally, the Japanese skeleton shrimp is known to prefer and rapidly colonise artificial structures (e.g. ropes and boat hulls) in areas of human activity such as harbours, aquaculture facilities or offshore wind farms (Boos et al 2011; Daneliya & Laakkonen 2012).

Caprella mutica, along with a number of other caprellid species, is largely a detritivore, but has also been observed feeding on sessile and mobile benthic organisms. It is capable of filtering particles out of the water column by swaying its body through the water and using its second pair of bristle-bearing sensory appendages as a sieve. In addition, C. mutica are also found frequently associated with different macroalgae, which may also serve as a food supply by either directly providing a substrate to feed on and/or providing substrate for other epibenthic organisms on which C. mutica feeds, or indirectly by elevating the caprellids into the current stream where they can filter-feed more effectively. Lastly, C. mutica has also been found in nutrient enriched artificial environments (via fish feeds) (Boos et al. 2011).

Due to interspecific competition for food, where the Japanese skeleton shrimp coexists with mussels, there is a noted reduction in the mussel size. Furthermore, the trampling done by caprellids causes the mussels to close, therefore interrupting their feeding, which could also explain the reduced sizes in mussels (Almón et al. 2014).

Any observations of this species can be uploaded on to ispot in order to feed into the current project to map the distribution of marine alien species in South Africa or reported to invasivespecies@sanbi.org.za, with a location and an image of the population.

Caprella mutica, the Japanese skeleton shrimp, is a non-indigenous species that is not yet listed under The National Environmental Management: Biodiversity Act (NEMBA), Act No. 10 of 2004 Alien and Invasive Species Lists.