Skip to content
Home » Animal of the week » Land hopper 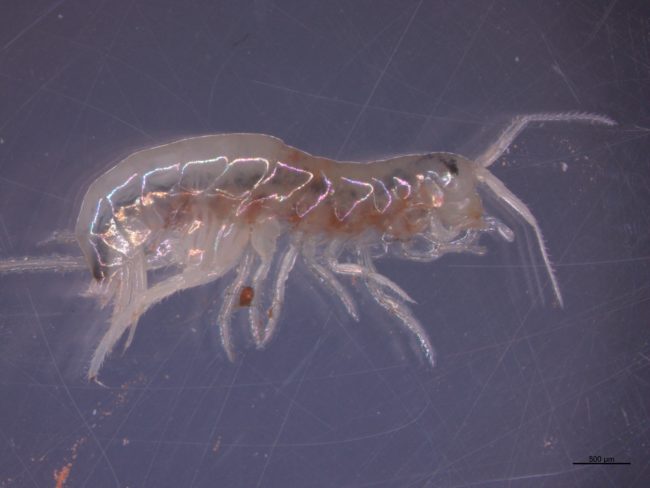 Talitriator africana is talitrid land hopper, which occurs mainly in forest and transitional areas between forest and grassland. It is only known to occur from Port Elizabeth north and eastwards to KwaZulu-Natal (KZN), eSwatini and Mpumalanga, mainly along the coastal belt; it is abundant in the KZN region. Talitriator africana was originally described from Cape Town. This species’ distribution is strongly biased by a lack of data in other areas. Recently it was found in Limpopo Province. Land hoppers feed mainly on leaf litter. They have an average life span of eight months and have three to four generations per year

How to recognize a Land hopper

Talitriator africana only grows up to 15 mm in length. Females are usually larger than males. They have one relatively elongated antenna. The gnathopods (claws attached to second thoracic segments) are moderately lobed posteriorly and are about twice as long as wide. They also have slender pleopods (forked swimming limbs), which exhibit an elongated shape. To the human eye they may resemble miniature shrimp or prawn 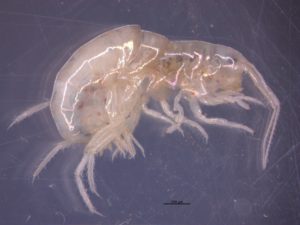 Talitriator africana is reported for the first time in Limpopo Province. It was originally described from the Western Cape, and until recently, was only known to occur from Eastern Cape to KwaZulu-Natal (KZN), eSwatini and Mpumalanga.

Terrestrial amphipods live in forest litter and its interface with the soil, and they shelter under leaves and in fallen trees and other pieces of wood on the ground. Talitriator africana and many other terrestrial amphipods feed by breaking down organic matter (e.g. the leaf litter under trees).

Talitriator africana is a most reliable indicator of a forest condition. It is proposed that the species could be a precursor for forest establishment.

There are no studies reporting the interaction between Talitriator africana and other amphipods, but in other parts of the world it is known that Talitroides alluaudi and Talitroides topitotum are potential competitors.

The species prefers disturbed areas, particularly forest edges. They are often found in high abundance at the ecotone, which that there is high decomposition rate at the boundary.

Land hoppers play an important role in the health of the environment. They are also known to be a good indicator of environmental health. This is because the terrestrial amphipods are highly susceptible to anthropogenic disturbance, with a marked decrease in numbers of individuals after fragmentation. 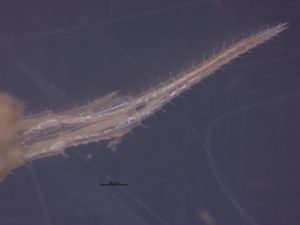 There are no known reports of domestication or uses of the species as pets or for other purposes.

The major threat to Talitriator africana is habitat loss or invasive amphipods such as Talitroides alluaudi and Talitroides topitotum, which are known to have major impacts on native amphipods. There is currently no known special conservation action for the species.