Skip to content
Home » Animal of the week » Leopard tortoise 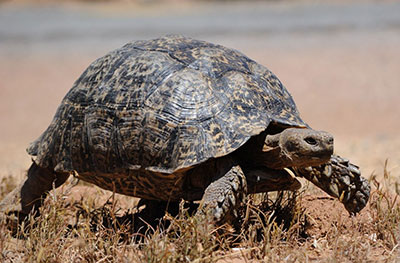 The genus name Stigmochelys is a combination of the Greek words stigma meaning ‘marked’ and chelone meaning ‘tortoise’. The specific epithet pardalis is derived from the Greek word pardos meaning ‘spotted’ after the spotted shell.

The attractively marked leopard tortoise is the largest species of tortoise in southern Africa. Wild leopard tortoises are usually well infested with ticks in the soft skin of the neck and upper limbs. This tortoise is the only species in the genus Stigmochelys and is often kept as a pet throughout the country due to its adaptability to captivity, where they breed readily. When these tortoises are transported from the Cape provinces to the northern parts of the country, they hybridise with local populations, as many escape or are released by owners who have grown tired of them.

This is a cause of major concern as genetic strains mix and the tortoises lose their identity. There is also the danger of introducing diseases to local populations, which may become exterminated because they are not resistant to the pathogens. Being relatively long-lived animals, they can reach an age of up to 100 years under normal conditions. In captivity they may live for 30 to 75 years. Please do not keep wild tortoises as pets as this is a thoughtless and selfish act.

How to recognise a leopard tortoise

Geographically the maximum adult size of these tortoises varies. At the southern and northern extremes of the range leopard tortoises are larger in mesic habitats. In the central savannahs of East Africa, a maximum size of 300–450 mm is reached and a weight of nearly 13 kg. In exceptional cases, a leopard tortoise can exceed 40 kg and have a carapace length of 750 mm. Females usually grow faster and larger than males. Leopard tortoises do not only vary markedly in adult size, there is also variation in the shape of the carapace (the upper section of the shell), and the degree of patterning and coloration. Individuals have a high domed carapace with steep sides, notched at the front, but a nuchal shield is absent and the dorsal scutes of some are raised like small pyramids.

The plastron cavity (the lower surface of the shell) is well developed with paired gulars (pertaining to the throat region) that are as long as they are wide. This tortoise has a moderately large head with a hooked upper jaw. The legs are well developed with five claws on each of the front feet and four on each hind foot. The forelimbs are armoured with large, irregularly shaped spiny scales and there are 2–3 buttock tubercles on each hind limb.

The flattened and serrated hatchling’s carapace is yellow with central paired or single black spots that are joined together. With age, the ground colour becomes darker, more heavily blotched and streaked with black. Old adults are often uniform dark grey in colour with a uniformly yellow or tan head and the limbs and tail are yellow to brown. In drier habitats, populations have lighter shells than those in wetter regions. The plastron is yellowish, often with black radiating streaks and spots. Males have much longer tails than females and the tail lacks a terminal spine.

Some scientists used to recognise two races, S. pardalis pardalis and S. pardalis babcocki based on body size differences, the size of the plastral concavity in males, and the number of spots in juveniles. It has been proposed that the typical race was restricted to the eastern and southern Cape, with a relict population in southern Namibia, while populations in central and eastern Africa belong to the second race. These two subspecies are no longer recognised because a recent, range-wide genetic study has shown that leopard tortoises comprise of seven distinct lineages, with no lineage conforming to the morphology and distribution of S. pardalis pardalis or S. pardalis babcocki. More research is in progress to ascertain if S. pardalis contains cryptic species.

The rear legs are well developed while the almost paddle-shaped and pigeon-toed front legs with a row of small nails is used to move very fast and easily manoeuvre over rocky terrain. Leopard tortoises can also climb and are able to float and swim slowly as their large, domed shell has a sizeable lung space that allows buoyancy. Their eyes are well developed and they have good eyesight.

When disturbed leopard tortoises will retract their heads into the shell for protection and make a hissing sound. Tortoises are loners except during the mating season, when the male pursues the female for some distance by butting her into submission.

They are widespread throughout the savannahs of Africa, from southern Sudan, Ethiopia and Somalia southward through East Africa to the Eastern Cape and Karoo, westward to southern Angola and Namibia. They are restricted in arid areas to where there are water sources. Released captives are found in areas such as the southwestern Cape and the former Transkei, adjacent KwaZulu-Natal and Lesotho, from which they are historically absent.

This is a generalist tortoise that is found in a variety of habitats including karroid fynbos in the south, mesic thicket, arid and mesic savannah, thorn scrub and grasslands from sea level to over 2 900 m.

When translocated from their homes, both sexes are known to undertake long return journeys (25–50 km). Home range size varies considerably according to the availability of food and shelter as well as the sex of the animal; females have larger home ranges than males possibly to find resources for egg production and suitable egg laying sites. In the semi-arid Nama Karoo, tortoise densities are very low (1.7 per 100 ha) compared with mesic thicket habitats in the Eastern Cape (up to 85 per 100 ha).

Sex and Life cycles
In the breeding season (September to April), males are combative, as with many tortoises. Combat includes bouts of competitor ramming, butting and sometimes overturning one another. The males have a direct approach to courtship – by trailing the female for some distance and butting her into submission. Once the female accepts the advances of the male, mounting will take place. The male will grip the female’s carapace by using his forelimbs and the concave plastron assists to keep him in position.

Copulation is a noisy affair, and is often accompanied by grunts, groans, gasps and wheezes from the male. The gravid female will take great care in selecting a sunny, well-drained site and start digging a flask-shaped pit (250 mm deep) with her hind feet. Urine is released from her cloaca (cavity into which the intestinal, genital and urinary tracts open) to soften hard soil. Depending on the size of the female, up to 24 eggs are laid in the hole. The eggs (32–41 × 35–44 mm) are white, spherical and hard-shelled. After egg-laying is complete, she refills the hole, which is patted firmly with her hind feet, and stamps down the soil by lifting and dropping her shell on the spot.

Large females lay several clutches, and depending on the temperature, incubation may take 8–15 months. Females are formed at high temperatures (31– 34°C), whereas males hatch from eggs incubated at lower temperatures. The ground may become very hard during the long development and hatchlings may have to wait for rain to soften the soil allowing them to dig their way to the surface. Hatchlings weigh 23–50 g and measure 40–50 mm in length.

Leopard tortoises are exposed to many enemies throughout their lives. Predators of the hatchlings and juveniles include rock monitors, storks, crows and small carnivores. Ants have been known to attack the eggs. In their natural habitat, falls in rocky areas may result in cracked shells, while others are scarred or killed by veld fires. Leopard tortoises and their eggs are still eaten by man in some areas.

The high-domed shell of the leopard tortoise provides extra protection from the sun’s heat, allowing the tortoise to withstand high external temperatures. This allows them to extend their stay in open habitats and feed for longer periods.

During the summer months they are active when food is optimal, so that they can build up their food reserves for the long, dry winter. Depending on the temperature, they may be active throughout the day. They push into thick bush to escape the heat of the day. During the dry season activity is greatly reduced, even though basking may occur.

These tortoises begin to search for a place to overwinter towards the end of May. During the cold winter months they will shelter in holes in the ground or sites among rocks or under logs, where they dig themselves in or under, with only the shell being visible.

Tortoises are important seed dispersers as they eat large quantities of plants and their faeces or scats are full of undamaged seeds. They often defecate under bushes, where seeds that have passed through their gut have a better chance of survival.

Young children are fascinated by the large size of leopard tortoises, which they see walking slowly, but determinedly, on the lawns at the Karoo Desert National Botanical Garden.

Leopard tortoises are not considered threatened as there is no evidence of range contractions or local extinctions.

Tortoises originated in Asia and entered Africa after spreading to Europe and North America. The oldest fossil tortoise in Africa was found in Egypt and dates back 35.5 million years. Genetic studies show that Stigmochelys is closely related to the Psammobates species of southern Africa.