Skip to content
Home » Animal of the week » Meerkat 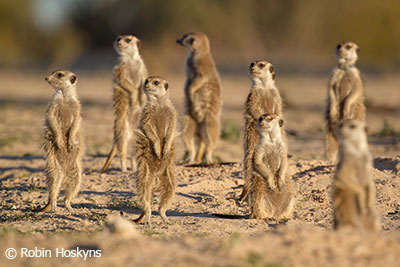 Standing at only 30 cm tall, meerkats, also known as suricates, have captured the attention of television and film audiences around the world because of their endearing appearance and interesting social behaviour. They depend on group cooperation to survive. They live in groups of 20 to 50 extended family members in large underground tunnels. These family groups, called gangs or mobs, are led by an alpha pair, with the female being dominant. Meerkats have a life span of up to ten years.

How to recognise a Meerkat

Suricata suricatta belongs to the mongoose family. They are characterised by long, thin bodies (weighing 680 g to 1.1 kg), and the colour of their fur varies throughout its distribution range. The coat is fawn-coloured peppered with grey or tan, and they have short parallel strips across their backs from the shoulders to the base of the tail. The fur on the limbs is lighter in colour than that of the body. The thin tail is half the length of the body and has a dark tip.

Their colouration enables meerkats to blend in quite easily in their arid habitats. Meerkats have facial features that resemble other members of mongoose family. Furthermore, they have remarkably small ears, which are dark in colour and covered with hair that is either black or white. The short hair above the nose is white or mixed brown and white. They have black rings of fur around their eyes; these black rings of fur enable meerkats to see efficiently in bright sunlight and the eyes have a protective membrane shielding them from dirt while digging for food.

Meerkats are diurnal – active during the day. They can be spotted in the early hours of the morning after sunrise and can be found huddling close to one another when it is still too cold to warm themselves in the early sunlight. Self-grooming can be evident during this period of gathering. However, meerkats have been found to spend less time in grooming during drought times as the morning rest tend to be short and the feeding gets underway immediately. After grooming, they begin to look for food.

They are always on the alert and turn their heads from side-to-side while foraging food. While digging, the head is held low and the tail is point up. Meerkats are active in the early morning and late afternoon and this is evident in summer when they stay in the shade of trees/shrubs not far from the burrow to avoid the midday heat on a sunny day while playing with the young. They vocalise when outside the burrow to maintain contact with others in their cohesive group.

Meerkats can dig throughout the day looking for food while communicating by means of vocal calls to the rest of the group. This strategy helps keep the group a distance of a maximum of about 5 m apart from one another while foraging. During foraging an individual on guard stands on a rock or tree stump looking out for possible predators.

The sentinel communicates danger to the rest of the group, and it has been found that they make two different types of alarm call depending on how urgent the situation is – either ‘run for cover’ or ‘danger may be in the area’. The calls are easily distinguishable and which call is uttered normally depends on whether an aerial or a terrestrial predator has been spotted. Meerkats also make use of olfactory communication. Scent released contains information on both sex and sexual receptivity of an individual.

Meerkats are restricted to southern Africa, where they occur in the more arid parts of Namibia, Botswana, Angola and South Africa. In South Africa they occur in open areas, across much of the central and western part of the country. They occur in the Western and Eastern Cape; however, they are more widespread in Free State and the Northern Cape.

Suricates are small burrowing mammals; they live in underground burrows with many entrances. They live in colonies consisting of about 20 to 30 group members, and are well-adapted to dry and open areas such as the northern and southern Kalahari. Suricates tend to inhabit areas of low annual rainfall (mean about 600 mm a year). The size of their home range is determined by the size of their pack, the quality and availability of food, and the availability of water.

Suricates may relocate their home range when food supply is depleted or when forced by other stronger groups. Having a cooperative social system enables these animals to work collectively to build and renovate their burrows. Suricates enter and exit their burrows through different entrances connected to each other. They have what is commonly known as bolt-holes, referred to as a sub-system of entrances. These entrances are all around their territories and act as safe houses when danger arises. These bolt-holes are used during the day when the meerkats are foraging away from their burrows.

Meerkats’ diet is mostly made up of insects; hence they are primarily known as insectivores. However, they can feed on other small animals such as snakes, birds and their eggs as well as spiders, millipedes etc. They avoid scorpion venom by perfecting ways of hunting scorpions. Scorpions are mostly nocturnal, and can only be captured by the meerkats when digging them out of the ground or by turning over stones under which the scorpions take shelter. Generally, meerkats do not actively chase prey although they may chase geckos and lizards over a few metres. Meerkats can spend most of the day foraging for food and once they find food, they eat on the spot.

There may be several breeding pairs in a group of meerkats. Meerkat groups are generally dominated by one breeding pair (one male and one female), but in some instances several females may breed, either at the same or at different times than the dominant female. The dominant female has two to four pups per litter, and if there’s plenty of food they can have up to three litters per year. Meerkats reach sexual maturity at between 10 and 12 months. The gestation period is 70 days.

They can reproduce throughout the year but most births occur in the warmer season when there’s some rainfall. They allow the young to leave the burrow when they are about three weeks old. There is evidence of infanticide in some groups, where the dominant female kills the pups of subordinate females and those whose pups have been killed by the dominant female often assist in rearing and even nursing the young of the dominant female. Both females and males, together with siblings, teach the young the necessary skills for survival in arid conditions.

Meerkats play an important part in maintaining ecological harmony in the arid regions of southern Africa. They are a food source for predators such as jackals and eagles, and they curb pest infestation by eating insects. Because meerkats don’t store fat, they eat a large number of insects every day.

Meerkats are good diggers and excavate their own burrows, which have many entrances. They may share these burrows with South African ground squirrels (Xerus inauris), usually with no aggression, and with yellow mongoose (Cynictis penicillata), but occasionally the meerkats will chase them from the burrow system.

Meerkats are specially adapted to living in the harsh desert environment. They have dark patches around their eyes that serve to reduce the glare of the sun and therefore increase their navigation capability. This increases their chances of spotting a predator. The eyes have a clear protective membrane that shields them from dirt while digging. Their ears also close tightly to keep dirt out. Meerkats also have dark-skinned bellies that are covered with only a thin layer of fur, allowing the meerkats to warm themselves by lying face up in the sun.

The burrows of the meerkat are complex with tunnels and sleeping chambers and they may have as many as 70 entrances to the burrow system. These entrances allow them to escape if their burrows are invaded by a predator, and many entrances also allow quick escape if they are threatened while foraging on the surface. Meerkats will often gang up on and mob a potential predator. Meerkats will often drag a scorpion or millipede through the sand before eating it. This helps to get rid of venom in the scorpions or toxic secretions from the millipedes.

Meerkats play an important part in maintaining ecological harmony. They are natural prey to numerous animal species that are both on the ground and in the air. They are a good source of food to the birds of prey such as eagles that can spot these animals from high above their heads, along with ground-dwelling predators such as snakes and jackals that hunt them on the ground. They curb pest infestation by eating insects.

Meerkats behavioural cooperation has attracted the interest of people and they are regarded as one of the most interesting small mammals with their complex behaviour. The appeal of meerkats has had a negative impact in that many people now want to keep them as pets. They can be bought in pet’s shops in the UK and are for sale on the internet, but their behaviour is not the same when kept in captivity than when surviving in the wild. They do not make good pets.

In captivity, they are often kept in a small cage because they are very destructive to furniture, carpets and electrical wiring. In addition, they scent mark and can give a person a painful bite with their sharp canine teeth. In South Africa it is illegal to keep a meerkat without a permit from the provincial conservation authority.

They are listed as Least Concern on the IUCN’s list of threatened species because they are widespread and present in well-managed protected areas such as the Kgalagadi Transfrontier Park.

Meerkats belong to the order Carnivora and are in the same family as the mongooses. There are no other species in the genus Suricata. There are 33 species of mongoose. There are only two other social mongoose species in South Africa; the dwarf mongoose and the banded mongoose, but these occur in different areas and habitats to the meerkat.