Skip to content
Home » Animal of the week » Mopani worm 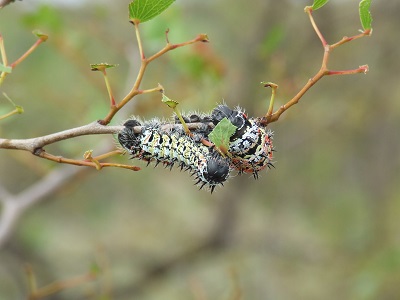 Male moths possess feathery antennae, with which they detect the presence of females. Larvae (caterpillars) are large, up to about 100 mm in length and about 10 mm in diameter. They are black in colour with round scales in indistinct, alternating reddish, yellowish and whitish bands and they are armed with short reddish or black spines, which are covered in fine white hairs.

Adult moths are able to fly, with males flying more easily due to not having the burden of carrying eggs. Caterpillars crawl to different parts of their host plant in the search for foliage.

Male moths have feathery antennae, which they use to detect the presence of females, possibly through pheromone cues.

The mopane worm is distributed throughout Mozambique, Malawi, southern Zimbabwe, northern South Africa and north, east and central Botswana, closely following, but not entirely restricted to, the distribution of the mopane trees (Colophospermum mopane).

Widespread, they are very common in semi-desert, bushveld and grassland, with high concentrations in mopane veld.

Mopane worms’ preferred host plant is the mopane tree, Colophospermum mopane; however, they also feed on Carissa spp., Diospyros spp., Ficus spp., Searsia spp., Sclerocarya caffra, Terminalia spp. and Trema spp. Caterpillars will stay on the same tree on which the eggs they hatched from were laid, unless there are a large number of them and the tree is completely defoliated before they complete their larval stage.

Sex: Eggs of the mopane worm hatches in summer, after which the growing caterpillars eats the foliage of the tree it hatched on (if there are a large infestation of larvae, the tree may be defoliated, and the caterpillars are then forced to move on to the next nearest tree with foliage to eat). The larvae go through four moults and the fifth larval stage (after the fourth moult) is considered the best stage during which to harvest the caterpillars for food. Surviving burrow underground where they pupate. The mopane worm overwinters in the pupal stage, during which it transforms into the adult moth. Adult moths do not feed and are short-lived; they only live for about three to four days during which they mate and the female lays her eggs.

Family life: Eggs are laid in clumps, and after hatching small caterpillars tend to aggregate together, but they become solitary as they grow and age. There are no parental care (the parents being long dead), and no real family life or interaction except for during mating.

Mopane worms are an important species in their mopane tree-dominated habitats, and they play an important ecological role in converting plant matter into nutrients that are available to other animals and plants. They are also economically important as they are a seasonally abundant form of cheap, but nutritious protein for local people. During outbreak years, too large numbers of mopane worms can defoliate large tracks of vegetation, depriving browsing game animals of food.

As one of many animals which are low down on the food chain, their eggs and larvae fall prey to different diseases, parasitoids and predators. Quite a high number of eggs are attacked by different parasitic wasp species, while large aggregations of caterpillars are attacked by fly and wasp parasitoids, as well as being very vulnerable to predators (birds and mammals) and virus infections. Local human populations also consume large numbers of these caterpillars in various forms (e.g. dried or in stews).

Their habit of burrowing underground to pupate (complete transformation to become adult moths), protects them from human harvesters and other predators and also allow them to survive the less hospitable winter months. The large number of eggs produced per female moth, and therefore the large number of caterpillars hatching each year, ensures the survival of the species.

Originally, the mopani worm used to be an important food source mainly for the rural communities occurring within the range of mopane woodland, but it is now widely eaten across southern Africa where it has become an important trading commodity. If lost, a major source of nutritious proteins would be lost for humans and biodiversity alike.

Caterpillars should not be handled as the spines causes’ skin irritation. These worms are an important non-timber forest product (NTFP) resource, which strongly supports nutrition and sustain communities economically.

With any species that produces a valuable commodity, there is the danger of over-utilisation. Currently, abundance of the caterpillars is declining as a result of increasing exploitation. In future it may be possible to farm this species by seeding mopane trees, allowing higher abundances for harvest. Research will however first be required to develop the methods to do this and to evaluate any subsequent environmental consequences.

Imbrasia belina fall in the moth family Saturniidae, known as saturniids or emperor moths, which include some of the largest species of moths with about 2 300 species described worldwide. A relative occurring in the same habitat as the mopane worm, and which also feeds almost exclusively on mopane tree is Gynanisa maja, the Speckled Emperor.