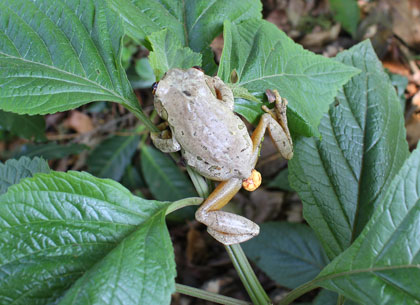 The species name natalensis means ‘from Natal’, which is the former name of KwaZulu-Natal, where this tree frog occurs.

The Natal tree frog is endemic to KwaZulu-Natal. These exquisite frogs live in the low branches of trees and shrubs, but sometimes descend to the ground (usually to lay eggs), and have been found on road surfaces. They can be heard calling from tree tops along rivers. Due to effects of forestry and invasive alien vegetation on their habitat, the species is endangered, although its official conservation status is Not Threatened’.

How to recognise a Natal tree frog

The Natal tree frog is a medium-sized tree frog usually lime-green to pale yellowish-brown in colour with scattered darker green patches. It can grow up to 64 mm in length. It has a blunt snout with nostrils closer to the snout tip than eyes. The brown eyes are large and protrude slightly. The underside is cream-coloured and the limbs are yellowish The forelimbs have unwebbed fingers with large terminals discs, while the toes on the hind limbs are extensively webbed with large terminals discs.

The Natal tree frog is hard to find and not much is known about their locomotion, although its arboreal habitat suggest that they can climb and cling to twigs as well as jump. The tadpoles leave the egg capsules and move towards the water with jumping and wriggling movements. The remainder of larval development takes place in the usual way.

It has a loud unmistakable advertisement call. Their call is a distinctive quack-like ‘yack-yack’ sound, which is usually preceded by a drawn out ‘eeeeeee’ buzz. Males call from exposed positions in trees and bushes usually overhanging or close to water.

The breeding and non-breeding habitat of this species is coastal forest, sand forest and coastal bushveld. Occasionally also found in grassland patches within forest and savanna. L. natalensis is usually found near swamps or pans in fairly dense, indigenous forest, although it occasionally occurs in habitats similar to those inhabited by Hyperolius pickersgilli (Pickersgill’s reed frog), such as stagnant water marshes.

The Natal tree frog is a predator and they feed on a variety of insects.

Most breeding activity takes place in summer once the rainy season is well under way. Males usually begin calling at dusk from exposed positions up to 3 m above the ground in the foliage of trees and bushes close to water. The females are usually much larger than males. Mating pairs move down to the ground where the female makes a hole near the water edge in which it lays about 200 eggs that are light yellow in colour.

Females use leaves and twigs to disguise the location of the hole. About 13 days later the tadpoles leave the egg capsules and move towards the water with jumping and wriggling movements. The remainder of larval development takes place in the usual way in water. Predators are thought to include snakes and terrapins, while the Natal tree frog preys on large flying insects such as moths.

The Natal tree frog plays a vital role in keeping the food chain balanced as both predator and prey. They serve as a pest-control by eating a huge number of mosquitoes, flies and ticks.

The fingers and toes are well-adapted to climbing and have sticky terminals discs. Their largely arboreal lifestyle protects them from many potential predators.

Frogs play a role in our ecosystem where they serve as pest-control by eating insects; they are also an indicator species as frogs are often some of the first animals to suffer when water quality deteriorates. Frogs provide important medicines for humans. Their presence indicates a healthy environment, the fact that they are disappearing worldwide is a warning sign that our global ecosystem is in trouble. The disappearance of frogs will cripple the food chain.

Frogs are incredibly diverse, beautiful and interesting. There are no reports of this species being utilised; it is not dangerous to humans.

Conservation and what the future holds

The major threat to L. natalensis is loss of habitat resulting from water drainage, invasion of alien plants and deforestation. In several areas in KwaZulu-Natal Eucalyptus plantations have lowered the water table to such a degree that many pans adjacent to coastal dune forest have completely disappeared. L. natalensis occurs in several protected areas, for example, Krantz Kloof Nature Reserve, Mkhuze Game Reserve, Greater St Lucia Wetland Park and Twinstream Mtunzini Natural Heritage Site. It is fairly common within its range, but local populations are probably quite small. The species does not appear to require any special conservation action at present.