Skip to content
Home » Animal of the week » Naval shipworm 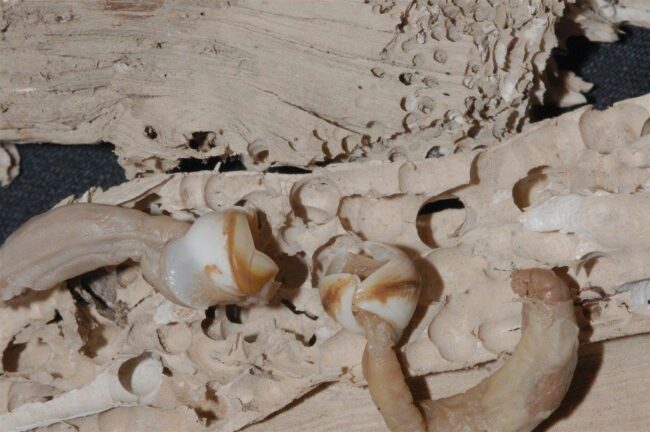 Wars have been lost without going into battle, thanks to Teredo navalis, commonly known as the naval shipworm. This ship-destroying mollusc has the rare ability to develop male organs and gradually change into females, self-fertilise, and then change back to being male.

The naval shipworm is the reason why the Spanish Armada lost to the British in 1588 by destroying their ships while waiting in Portuguese and French harbours (Hoppe 2002; Maksimov 2011). Many sailors were anxious when going to sea due to the damage caused by the naval shipworm (Maksimov 2011). Naval shipworm have been settling and damaging sea-going vessels from early boats to modern sailing yachts.

Naval shipworm is a ship-dwelling worm, hence it’s common name, naval shipworm. Its origin is not known, however it has become a serious invader on a global scale (Hoppe 2002; Paalvast & Van de Velde 2011; Appelqvist et al. 2015; Appelqvist & Havenhand 2016), including in South Africa, where it is reported to be one of the oldest invaders (Mead et al. 2011). The naval shipworm specifically feeds on wooden boats and has a long history of spreading by moving from boat to boat in the open seas (Hoppe 2002).

It can survive in the sea but will eventually attach to travelling ships, wood piers and even ships in docks – attacking them by boring through the wood, hence also known as the woodborer. Extensive feeding by naval shipworm can cause wood decay in a few months (Eriksen et al. 2016), ultimately leading to the sinking of ships (Griffiths et al. 2009). A great deal of effort has been made to protect wooden ships from feeding damage caused by naval shipworm, however, to no success, as the effects of T. navalis remain devastating (Can & Sivrikaya 2020). Ancient Chinese, Egyptian and Roman sailors used chemical methods such as painting and copper or lead plating to protect wood against shipworm (Hoppe 2002).

However, these metals cause damage to the surrounding environment (Maksimov 2011). The earliest methods for protecting wood from shipworm included pulling ships upstream into freshwater because the naval shipworm requires salt water to live (Hoppe 2002).

Description/How to recognise a naval shipworm?

The naval shipworm is a long worm-like marine bivalve (have an external covering that is a two-part movable joint shell that contains a soft-bodied organism) (Sinyo et al. 2019). The adults are 30–45 cm long (Tuente et al. 2002; Weigelt et al. 2016), brownish in colour, with a drill-shaped shell on the head that is used to pierce wood (Sinyo et al. 2019).

Naval shipworms are mobile at the stage after development where they are free swimming in the sea water (Hoppe 2002; Maksimov 2011). At this stage they develop gills, siphons and a well-marked foot, which is called the pediveliger larva stage (Hoppe 2002; Maksimov 2011). They can crawl for about 1 mm using their foot. Shipworms are chemically drawn to the wood and actively swim the last centimetre distance to the wood and attach with a byssus thread (strong, silky fibers that are made from proteins and used to attach to substrates) (Hoppe 2002). Larvae (active immature phase) spread and occupy new habitats during their free-living stage before attaching to wood (Maksimov 2011). At this stage they are very sensitive to the presence of wood and are looking for an opportunity for attachment (Maksimov 2011). 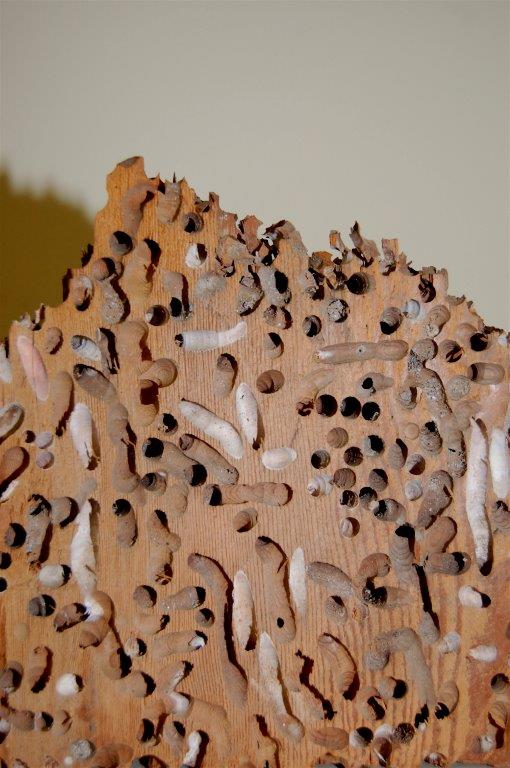 The naval shipworm detects high quality wood using chemical cues from cellulose (the main substance in the walls of plant cells, helping plants to remain stiff and upright), and will then attach to and feed on the wood and complete their life cycle (Eriksen et al. 2015).

The naval shipworm is distributed worldwide as an invader (Appelqvist & Havenhand 2016; Weigelt et al. 2016), and although its origin is unknown, it is thought to possibly be native to Europe (Mead et al. 2011). According to Mead et al. (2011), in South Africa, the naval shipworm was discovered because of the damage it caused to wood structures on the southeast coast in Port Elizabeth, Eastern Cape and in Mossel Bay and Knysna in the Western Cape.

Naval shipworms are found in any marine environment with the required salt and temperature levels where they can attach to wood. They are found in harbours, estuaries, mangroves and the open sea (Tuent et al. 2002; Maksimov 2011; Sinyo et al. 2019). For two weeks they inhabit the water; not near the bottom or the shore (Hoppe 2002). Naval shipworms spend most of their life attached to wood, travelling from ocean to ocean. They tolerate a wide range of salt and temperature levels (Tuente et al. 2002; Sivrikaya 2019). They tolerate a high range of salts from as low as 5 to as high as 35 practical salinity unit (Paalvast & Van der Velde 2011; Appelqvist & Havenhand 2016; Treu et al, 2019). Due to their dependence on salt levels for activity, their boring activity decreases with low salt levels and stop completely when the salt level is very low (Paalvast & Van der Velde 2011). The reproduction rate is high at salt levels suitable for boring activity (Paalvast & Van der Velde 2011)

Naval shipworms feed on the wood that they are attached to with the help of bacteria found within their cells. They also feed on small drifting or floating organisms in the sea water – this is known as filter feeding

Six weeks after birth, naval shipworms develop male sex organs and they then gradually change into females. They can self-fertilise and after reproduction in the female phase they change back to the male phase to start another cycle and may have several cycles a year in warmer climates (Hoppe 2002; Weigelt et al. 2016). They mature within 7–8 weeks after metamorphosis (physical development after birth, involving change in an animal’s body structure through cell growth and differentiation) and will attach to wood after 1–3 weeks (Eriksen et al. 2014a, 2016). Adults can live up to 3 years (Maksimov 2011; Weigelt et al. 2016). They have a high reproductive potential with approximately 5 million larvae released by one female per year. (Eriksen et al. 2014; Weigelt et al. 2016).

There are 80 known recorded species from the family Teredinidae (Tuente et al. 2002) and they compete for resources (Appelqvist et al. 2015). There are about 20 recorded species from the genus Teredo that live in wood (Maksimov 2011). Teredo navalis have very few predators as they spend their life cycle burrowing into wood in the ocean (Appelqvist et al. 2015).

Naval shipworms are adapted to hibernate when environmental conditions are not favourable (Paalvast &Van der Velde 2011) and are very resilient in that they can survive in a completely closed burrow for up to at least six weeks (Appelqvist et al. 2015). Unlike other shipworms, the naval shipworm can survive on feeding only on wood (Hoppe 2002; Paalvast & Van der Velde 2013).

Naval shipworm plays an important ecological role as the main agent that breaks down plant material in the shallow marine and slightly salty environment like estuaries (Mksimov 2011). Shipworms play a vital role in the degradation of wood in the marine environment when degradation by bacteria and fungi is slow. Some species of crustaceans (group of animals with hard outer skeleton) are known to reuse the naval shipworm burrows as habitat (Maksimov 2011).

In Indonesia, naval shipworms can be found in estuaries and mangroves, making them easily accessible to locals who feed on them because they are a good source of protein (Tuent et al. 2002; Sinyo et al. 2019).