Skip to content
Home » Animal of the week » Oribi 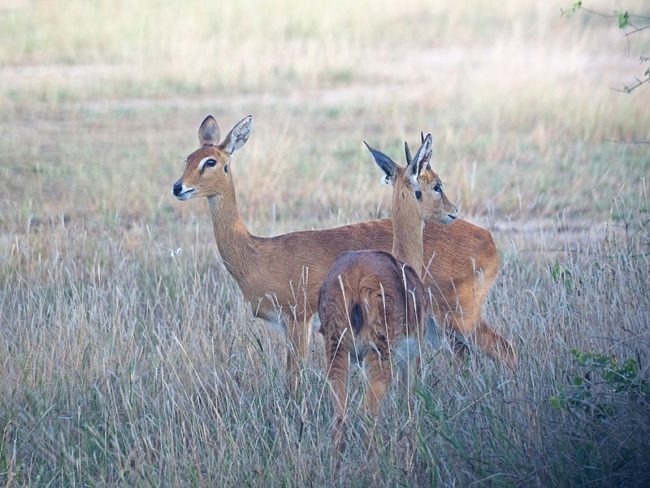 The oribi is a small antelope recorded from the northeastern to the southeastern parts of South Africa, as well as across the African continent up to the Sahel in North Africa and West Africa. There are 12 suggested extant subspecies of the oribi, while the 13th subspecies is considered extinct.

Only one subspecies, O. ourebi ourebi, is recorded in South Africa and it is considered an evolutionary significant unit, i.e. it has a distinct ancestry from the rest of the African populations. Therefore, conservation efforts to conserve its unique lineage are necessary.

Although mostly recorded from protected areas, the habitats of the oribi in South Africa are largely fragmented due to human socioeconomic activities including agriculture, forestry, settlement, infrastructure, as well as bushmeat for consumption and recreational hunting.

How to recognise an oribi

Oribi are elegantly built antelope standing at a height of about 580 mm. Sexual dimorphism is apparent in that males (average 17 kg) are slightly smaller and lighter than females (2 kg heavier). The males are furthermore distinguished by horns usually just over 110 mm long and straight, with ridges at their base.

The legs are slender and have a bushy growth of hair at the knees. The neck is slender and long. The tail is short, bushy and usually dark. While the underparts of their body (which range from the tail below to the chest) are white, the upper parts may vary from reddish brown to light brown.

Oribi are territorial mammals and do not move around a lot. Their home ranges vary from 0.05 km2 to just under 0.5 km2. They use a simple four-beat gait (similar to a horse) when walking but use a two-beat gait with a wave-like motion when running. When startled, they jump and bounce away in a zigzag.

Oribis possesses six sets of glands that they use to mark their territory and for other communication purposes. These glands contain up to 75 chemical compounds that may be specific to each individual. A male oribi usually follows a single female while dispersing his scents all over their territory. This serves as both territory protection as well as courting behaviour.

The continuous presence of the male leads to the female getting acclimatised to, and preferring, his scent, while also discouraging challenges from other males. Furthermore, it prevents the female from moving too far from the male, and thus limiting the territorial range and cost of its protection. They also use their faeces and urine. The oribi vocalises in ‘short, shrilling blasts’ Coverdale et al. 2006)

The oribi is distributed widely across sub-Saharan Africa, ranging from the coastal areas of West Africa (Ghana, Togo and Benin), East Africa (Eritrea, Somalia and Kenya) and southern Africa (Mozambique, South Africa, Zambia and Zimbabwe). Nevertheless, the distribution is fragmented and narrow.

For example, the species may only be present in small portions of the countries in which they are found. Such is the case in South Africa where they are found in patchy distributions across the northern and southeastern provinces. They occur in a single locality in Rwanda.

The oribi largely inhabit both open and wooden grassland habitats and are mostly abundant in wetter areas. Although they prefer habitats with a minimum mean annual rainfall of about 500 mm, they may occur in other areas and at any elevation between sea level and 2000 m. 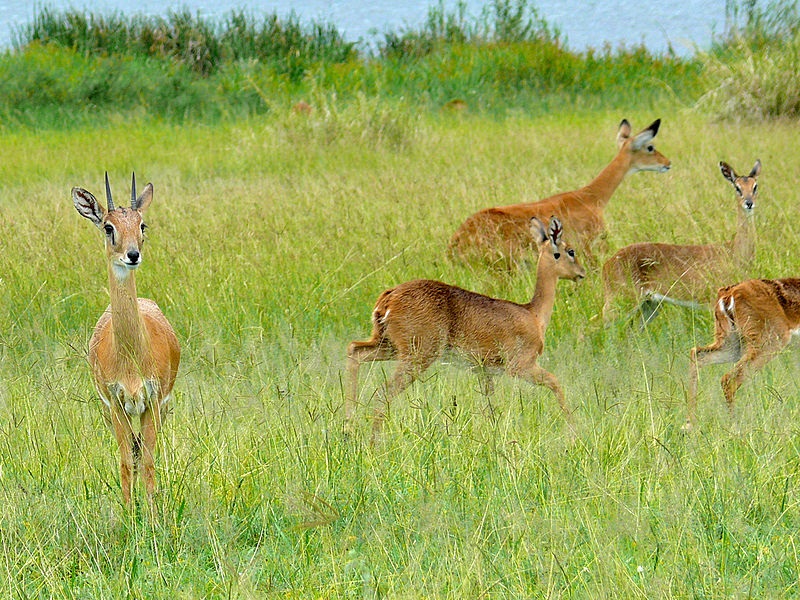 The oribi is the only small antelope species that prefers grazing (feeding on low-growing plants such as grass) over browsing (feeding on higher growing plant material such as fruits, leaves, etc.). They are selective feeders that rely mostly on grass and other green leaves for their dietary requirements.

They also feed on tree foliage and legumes. Oribis may occasionally feed on other plant material such as leaves, nuts and flowers, especially when grass is not available.

Oribis are placental mammals and are therefore viviparous i.e. they give birth to live young who feed on milk from their mother. They breed throughout the year but the breeding peaks during wet seasons. The gestation period usually lasts six and a half to seven months, culminating in the birth of one offspring, while twin births are rare. Females reach sexual maturity earlier at about seven to nine months, while males reach maturity later at about 10–14 months. The average lifespan of the oribi is 8–12 years. In captivity, however, they may live up to 16 years.

Oribi males with no mates are mostly solitary. Oribis form small family units with a female–male pair that defend a territory and a young/juvenile or two. Pregnant females avoid social interactions for a few weeks before giving birth and the young will be hidden until they are weaned, or until they are about three months old.

The young stay with both parents until they reach sexual maturity, usually after seven months. Monogamous arrangements are the norm. However, polygamous and multi-male and multi-female arrangements have been observed in other regions, where a dominant male cooperates with, or at least tolerates, a couple of males to defend a territory.

The oribis often cohabit similar environments with larger antelopes and other grazers such as the common hippopotamus, the African buffalo, the topi, gazelle and hartebeest. These interspecific competitors may not greatly affect available resources for oribis. Furthermore, the other animals may help with detection of predators.

For the oribi, these includes a wide variety of predators, mostly felid mammals in addition to opportunistic predators like reptiles (pythons). In addition to wild predators, oribis face threats from humans and domesticated animals.

Human activities, such as hunting and snaring provide a big challenge for subpopulations; in some instances, these populations and subpopulations have experienced declines of over 90%. Lastly, dogs provide a real threat to oribi populations, whether it be stray dogs running them down or being used in recreational hunting.

Oribis exhibit highly flexible behavioural patterns. Depending on the type of microhabitat, they can be monogamous or polygamous. Although they are mostly asocial animals, they form small herds of up to 12 individuals during periods of low grass, e.g. when grass is burnt, for extra protection and they may cooperate in defending their territories (for example, home ranges).

However, they lack coordination – when in groups, oribis scatter in different directions when they are startled. They have also adapted to open grasslands where they can hide silently behind tall grass, keep an ear out for agitators and leap to safety at signs of danger. However, they are curious animals and usually do not run very far from danger. They rely on quick bursts of speed to outrun predators or other sources of danger.

The oribi is prey to a wide variety of predators, both medium-sized (such as caracal) and large (such as lions and the endangered cheetah). The species is also one of the foremost important source of subsistence bushmeat for rural communities across Africa. It is used as a flagship species to highlight the importance and conservation of grasslands, which are also home to other threatened antelopes among other animals.

The oribi is hunted for sustenance and used as bushmeat. Recently it has been hunted for recreational purposes, which has contributed to population declines. Oribis are largely found around private properties where they may enjoy some degree of protection.

However, they may face tough competition from livestock for resources and may suffer negative effects where resources are scarce. Poor land management such as overgrazing and poor burning practices may also adversely affect oribi subpopulations.

Furthermore, landowners increasingly face challenges to protect them from poachers, as recreational and commercial hunting is becoming increasingly difficult to police and manage.

The oribi is listed as Least Concern (LC) across their African range due to their wide distribution, although their populations are currently decreasing. For the South African oribi however (O. o. ourebi), the species has undergone national population decline of 13% over a period of 18 years due to habitat , over-utilisation, poor law enforcement and lack of cooperative management.

It is therefore listed as Endangered (EN) under the C criterion for South Africa. Plans to curb the continuing decline and enhancing conservation efforts include translocations, raising awareness regarding conservation of the species’ habitats, as well as captive breeding.

Oribis belong to the family of bovids (Bovidae), which includes well-known domestic animals such as cattle and goats, as well as wild animals such buffaloes, springboks and impala. They are the only member of the tribe Ourebiini, and the only members of their genus Ourebia. The closest relative to the oribi may be the saiga, a Critically Endangered antelope found in Eurasia.