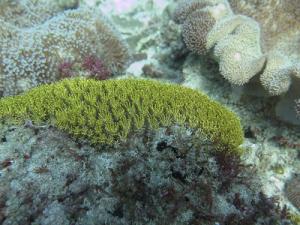 At first glance one would think this beautiful creature is a plant – surprisingly it’s not! It’s a water-based animal with eight tentacles – hence it is referred to as an octocoral and occurs in a variety of colours ranging from green, purple and pink to cream and white with contrasting colours in their centres (Van Ofwagen, 2015). It is also known as palm tree branches or mushroom stalks, and form a mat-like covering on the rocky substrate as they attach to hard rocky surfaces (Liu 2008). They grow very fast; almost like invasive corals.

These palm tree polyps are fixed in one place because they are attached to rocks, substrates or glasses of aquariums and they grow by spreading their mat-like branches (Calfo 2007).

Communication patterns of corals are efficient for their growth and development. These patterns are sign-mediated and require active organisation. They occur within cells, among cells and between corals of the same species as well as those of different species (Bak1982).

C. viridis is found in shallow waters of the Indo-Pacific and Phillipines.

C. viridis occurs or grows on rock or substrates. They attach to these rocky surfaces and spread out across. They are found almost throughout reefs, but mostly occupy the back and front-reef slopes and the shallowest part of the reef zones with tidal currents (Rocha 2011).

The species have developed quite a number of feeding strategies because of their sessile nature. They are filter feeders, absorbing dissolved organic matter from the surrounding water column. They also get nutrients from other marine aquatic plants found in the jelly-like fluid inside the cells of marine invertebrates, with which they have a symbiotic relationship (an interaction between organisms which may either be harmful or beneficial to the other) (Suzuki et al. 2003).

One cannot differentiate their sex by the way they look physically. They reproduce asexually without the fusion of egg and sperm cells by fragmentation where each individual grows independently. Sexual reproduction occurs when polyps release eggs and sperm into the water column and fertilization occurs (Van Ofwagen 2015). They can also be propagated and spread throughout, and can be grown on aquarium glasses (Liang et al. 2008).

Generally, these species live in colonies. C. viridis has a good interaction with other species of the same genus (Calfo et al. 2007).

C. viridis gets along very well with species of the same genus, but defends itself against certain grazers by secreting a toxic substance. However, it is fine with some saltwater fish (Fujiwara et al. 2003).

Although C. viridis is sessile and defenceless, it produces various toxic chemical substances to protect itself from predation by grazers (van Ofwagen, 2015).

Human beings also benefit from some of the properties of the chemical substances produced by this species in the form of several products that are known to be therapeutic agents for the treatment of many diseases (Liang et al. 2008; Fujiwara et al, 2003). It serves as food for many grazers in the marine ecosystem (Jain et al. 2008).

C. viridis has properties that are potential drugs for ailments as these organisms are a rich source of steroids (to treat arthritis and gout) and terpenoids (used as drugs and perfumes) to help cure cancer in human beings, so its destruction can decrease the production of these drugs putting people’s lives at more risk.  Some have been collected from the West Pacific Ocean and evaluated for the use of marine animals to assist in the production of medicine.

The threat to this species is the destruction of its coral reef habitat by trawling gear and the use of explosives to kill fish and other species for capture. It has not been listed in the IUCN Red List for endangered species because it has not yet been evaluated (Liang et al. 2008).

The Clavularia genus is in the Animal Kingdom, Phylum Cnidaria, Class Anthozoa, Order Alcyonacea, Suborder Stolonifera. There are 69 accepted species in this genus in Marine Aquariums South Africa (Van Ofwagen 2015).