Skip to content
Home » Animal of the week » Paradise Skipper 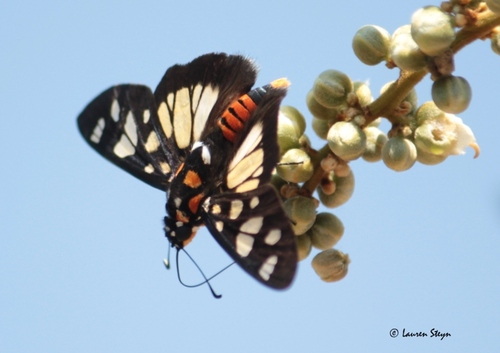 Abantis paradisea is commonly known as the Paradise Skipper. Members of this species are named for their quick, darting flights habits. They are restricted to the lowland forests from the Eastern Cape to the southern coast of KwaZulu-Natal.

Paradise Skippers vary in size with males’ wingspan about 40 – 45 mm and females slightly larger, with a wingspan of about 43 – 55 mm. The body length, from the tip of the head (excluding the antennae) to the end of the abdomen is about half the length of the wingspan. Skippers are characteristic butterflies with robust and hairy bodies with rounded wings. The head of the Paradise Skipper is black with white spots, while the hairy thorax is black with dark burnished-orange and white markings.

There are four burnished-orange abdominal segments separated by black ring markings, followed by several black segments and a terminal burnished-orange segment. Wings are black with almost transparent to light yellowish (black-demarcated) markings/windows. The larvae are smooth, with large heads and a distinct neck. Males have a blackish streak or patch of scent scales on their forewings. Adults can easily be distinguished from other butterflies by the backward-facing club on the tip of the antennae, which look like crochet hooks.

According to Dobson in Mecenero et al. 2013, skippers, unlike other butterflies, are placed in the superfamily Hesperioidea, all members of which belong to a single family, the Hesperiidae (skippers), because they are morphologically distinct from other butterflies and somewhat resemble moths. More than 3 500 species of skippers have been described worldwide. Several members of the Hesperiidae are extremely widespread.

Paradise Skippers are active during the day and they use wings to fly. When resting they keep their wings angled upwards or spread out and rarely fold them completely.

Butterflies can communicate in different ways by using color, sound, and physical actions. They also communicate with one another through pheromones to seduce the females.

This species belong to an endemic Afrotropical genus. The genus occurs in a variety of habitats, including rainforest, dry forest and both dry and moist savanna. Several members of the Hesperiidae are extremely widespread (Dobson in Mecenero et al. 2013).

Most species of butterflies are habitat specific and they tend to be limited to a single group of plants as a food source. Butterflies have a proboscis, similar to a long tube, which is coiled when moving around and uncoiled for feeding. Many species feed on pollen, rotting fruit, animal dung, carcasses and tree sap. Adults have been observed drink nectar, and sometimes mud for minerals. The larvae feed on Hibiscus tiliaceus (coast hibiscus), Philenoptera violacea (apple-leaf), Bridelia micrantha (mitzeeri) and other shrubs or small trees occurring in its woodland habitat.

Butterflies have four developmental stages, namely egg–caterpillar (larva)–pupa–adult. The eggs of hesperiids are generally laid singly and are usually dome-shaped; with a varying degree of sculpturing between subfamilies. There are two generations per year, with a peak in spring from October to November and a stronger peak in autumn/early winter from March to June. Butterflies lives from a few weeks to a few months, and some species (not skippers) may hibernate during winter or migrate to areas with more favourable conditions.

The eggs, laid singly on a leaf shoot, are white to pale yellow, finely ribbed and domed. The larva is a pale colour with rows of dark sub-dorsal spots. The pupa is brown to white, with a forked head horn. Pupation usually takes place within the larval shelter and the pupae often secrete a layer of white, waxy powder, the function of which is currently unknown.

Butterflies don’t have a family life. The male often dies soon after mating and the female soon after finding a suitable plant species to lay eggs. The caterpillar (larva) remains on the same plant host until it reaches adulthood (becomes a butterfly).

Butterflies and caterpillars are preyed upon by birds and other insects.

The female produce a sticky substance to ensure that the eggs stick on the leaves or stems of host species. Some species of butterflies migrate during cold season to warmer parts. They are often well camouflaged. 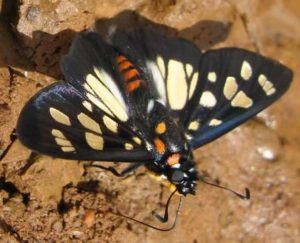 Butterflies are important pollinators and they are also a good source of food for many animals, including birds, reptiles and other insects.

Butterflies have been used on biodiversity monitoring projects to study the impact of habitat loss and climate change.

Abantis paradisea is Not Threatened.