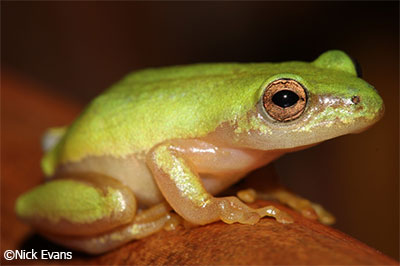 Named after the herpetologist, Martin Pickersgill, who discovered the species in 1978 in Mount Edgecombe, Durban.

A Critically Endangered frog species with a habitat in decline.

These frogs are a genuine needle in a haystack. Small, quiet, secretive and fast, they are often difficult to spot among the dense jungle of reed beds deep within the fragmented wetland landscapes of coastal KwaZulu-Natal.

How to recognise a Pickersgill’s reed frog

Hyperolius pickersgilli is from the family Hyperoliidae comprising small to medium-sized, brightly coloured sedge and bush frogs. Pickersgill’s reed frog is one of the tinier species with males measuring 22 mm and females up to 29 mm in length. The species exhibits varying colouration with the males and juveniles usually brown in colour. Adult males are marked with a distinguishing dark-edged, light silvery, dorso-lateral band running from the snout to the hind quarters on each side.

Females are usually a light brilliant green in colour and lack the dorso-lateral banding. The underside of the body is smooth and pale, while the concealed body surfaces of the inner thighs, toes and fingers lack pigmentation. The snout extends only just beyond the nostrils and is slightly pointed. The eyes do not protrude and the pupils are slit horizontally.

These frogs are quick and generally leap from leaf to leaf within their habitat. Out of the breeding season the species has been reported to move up to 2 km from breeding sites for foraging and over-wintering.

The behaviour and call of this species is cryptic, often making it difficult to detect even when present. Males call from dusk until the early hours of the morning. The call is a soft insect-like chirp, which is given off infrequently (Listen here: http://www.leapdayforfrogs.org.za/70-Hyperolius-pickergilli.wav).

Hyperolius pickersgilli is endemic to a narrow strip of land along the coast of KwaZulu-Natal. The species distribution is severely fragmented. Following extensive surveying for several years, Tarrant & Armstrong (2013) found subpopulations occurring in 22 isolated sites ranging from Sezela in the south to St Lucia in the north. Out of a total distribution range of 2 303 km2, the frogs have only been found to occupy a total land surface area of 9 km2.

These frogs are described as habitat specialists that require perennial wetlands (between 20 and 60 cm in depth) comprising dense reed beds in Coastal Bushveld-Grassland at low altitudes (± 380 m above sea level).

Populations are known to occur only within 16 km of the coast. Their breeding habitats are composed of very specific dense vegetation encompassing short reeds like snakeroot (Persicaria attenuata) or indigenous ferns, from which males call, and taller, broad-leafed vegetation, including the common reed (Phragmites australis), bulrushes (Typha capensis) and sedges such as Cyperus dives and Cyperus papyrus on which the frogs lay their eggs. They are seldom found at the same breeding sites as the abundant painted reed frog (Hyperolius marmoratus).

The species is known to move considerable distances from its breeding habitat (up to 1.5 km) during winter and terrestrial buffer zones (at least 50 m, preferably more) within its distribution range are therefore essential.

Like most frogs, Pickersgill’s reed frogs are insectivorous, preying opportunistically on any small insects (like flies and mosquitoes) passing by (I. du Plessis, National Zoological Gardens, Pretoria, 2015 pers. comm.).While they do not appear to be selective feeders, their exact diet is unknown and more research is required.

Fertilisation of eggs occurs outside of the body (externally). To ensure that the eggs are fertilised, these frogs display typical amplexus mating behaviour where the male climbs onto the female’s back and clasps his forelimbs around her while fertilising the eggs as they are released from her body.

Males commence calling towards the end of August and this continues to early March. Different frog species can release anything between one and several hundred eggs at a time. For Pickersgill’s reed frog, egg-laying has yet to be observed in the wild but Raw (1982) proposed it most probable that mating and egg-laying takes place several centimetres above the surface of the water on broad leaved vegetation. Eggs are deposited in a clear gelatinous mass and are two-toned in colour (off-white at the bottom with a brown-black colour on the top). Parental assistance has been observed in keeping the eggs moist. The eggs take approximately one week to hatch and the tadpoles are dropped into the water below.

Development and metamorphosis of the tadpoles into froglets ensues. At this stage of the frog’s life, its internal organs are changing and it develops its fore and hind limbs. The froglets continue to change and once they are ready for life on land, their tails are reabsorbed and they become juvenile frogs. There is usually a bit of tail left at this stage but it gradually disappears and the sexes start to develop their distinguishing adult colours. It is known to take at least a year for these frogs to reach sexual maturity in captivity, but this is yet to be confirmed in wild populations (I. du Plessis, pers. comm.). The life-span of these frogs is also unknown.

Additional research is necessary to understand the exact breeding biology, life history and ecological requirements of this species.

Amphibians play an important role in the ecosystem as both consumers and prey in many food chains. Adult amphibians are some of the best biological pest controllers.

Frog eggs and tadpoles are food for fish, birds and other animals. The eggs of the Pickersgill’s reed frog have two colours. The bottoms of the eggs are white and pale, similar to the underside of the frogs themselves. This adaptation makes the frogs and eggs less visible to the fish and lurking predators below the water surface. The top surfaces of the eggs are brown to black in colour and this makes the eggs appear pebble-like to predators above (I. du Plessis, pers. comm.).

Camouflage is a common defence mechanism in frogs. Most camouflaged frogs are nocturnal; the Pickersgill’s reed frog is no different. During the day, they seek out areas at the base of reeds where they blend into the vegetation. The males emerge around dusk and begin calling until early morning.

The frogs also have the ability to change colour. The range of colour is not large but during the day they appear browner and well hidden between the vegetation and at night males and females readily display their brilliant colouration and marked sexual dimorphism (I. du Plessis, pers. comm.).

From the ecological perspective, amphibians are regarded as good ecological indicators. Because frogs ‘drink’ through their skin, they’re susceptible to man-made changes in the environment. Due to the high degree of sensitivity of habitat requirements by the Pickersgill’s reed frog, they will respond to very slight changes in the environment and such responses have and can be used to indicate poor habitat quality, habitat fragmentation, ecosystem stress, pollution and various anthropogenic activities that would affect other species as well.

Hyperolius pickersgilli is not known to be utilised directly by humans in any way.

Frogs rarely receive the best public reviews. One of the most crucial aspects for their survival is to raise public awareness around the susceptible position that the Pickersgill’s reed frog, and many other amphibian species, are finding themselves in. Raising awareness will change perceptions and get more people actively involved in frog conservation.

The species is threatened primarily by habitat loss. Few fragmented pockets of remaining habitat exist and the majority of the occupied sites are located on privately or commercially-owned land along a highly sought-after stretch of coast. Many of these sites are experiencing ongoing decline in habitat quality due to mining, agriculture and development. Only two sites fall within state-protected areas and two historical sites no longer exist as a result of extensive urban development and wetland drainage. The need to identify and protect remaining breeding H. pickersgilli habitats is crucial.

The Pickgersgill’s reed frog is a specially protected species within its province of occurrence under the KwaZulu-Natal Conservation Management Amendment Act (1999).

The species has been prioritised for conservation research and is also the first threatened frog species in South Africa to be used in a captive breeding programme currently being undertaken by the National Zoological Gardens in Pretoria, the Johannesburg Zoo, and the South African Association for Marine Biological Research (SAAMBR) in Durban. The ex situ conservation of the species will allow scientists to regulate and breed the frogs in optimum conditions and reintroductions will ultimately take place into well-managed habitat.

It is a priority species for the Endangered Wildlife Trust’s (EWT) Threatened Amphibian Programme (TAP) and a Biodiversity Management Plan (BMP) for the conservation, research, protection and rehabilitation of the species and its habitat in the wild has recently been developed by the EWT and Ezemvelo KZN Wildlife in collaboration with other key stakeholders.

Dr Jeanne Tarrant of EWT is still actively involved in the research of the species, and implemented monitoring guidelines to assess potential threats and conservation interventions on populations in the long term, as well as working with landowners to offset the impacts of mining and development on its habitat. The EWT is also working with the eTwekwini Municipality to rehabilitate four wetland sites in Durban and which the species occurs.