Skip to content
Home » Animal of the week » Root-mouthed jellyfish 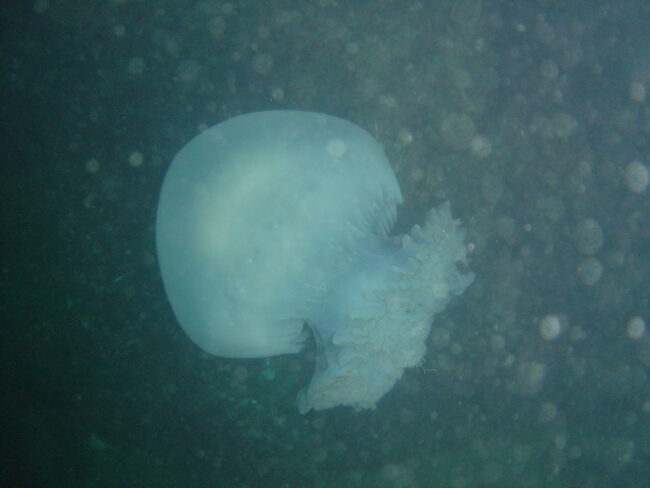 The root-mouthed jellyfish (Eupilema inexpectata) is one of the few true jellyfish species that occur in South Africa. It belongs to the Class Scyphozoa, which are also more colloquially known as scyphozoans. The species was discovered relatively recently and was described in 1992. Unlike cryptic species (species that have been documented but misidentified for closely related species), this jellyfish was an entirely new record, and is currently considered a South African endemic. The discovery of this species highlights the importance of constant biodiversity monitoring, as well as the gap in knowledge regarding South African marine biodiversity.

How to recognize the root-mouthed jellyfish

Eupilema inexpectata has a dome-shaped umbrella or bell that falls a little short of being a hemisphere. The umbrella can reach about 350 to 400 mm in diameter. It has eight short and stiff oral arms that extend from the base of the umbrella but can reach about half of the umbrella diameter in length. The oral arms are fused together for about half their length. Unlike most members of the Rhizostomatidae family (rhizostomatids), the root-mouthed jellyfish lacks club-shaped or filamentous terminal appendages. However, the oral arms have terminal ribbon-like structures, or epaulettes, that give the oral arms a wing-like shape. It also lacks marginal tentacles, which is also characteristic of members of the Rhizostomatidae family. The species appears opaque and white in colour. Sexual dimorphism is mostly observed in the colour of gonads in scyphozoan species.

Jellyfish are made of up to 95% percent water and have a wide variety of modes of propulsion to move through water. Unfortunately, as a recently discovered and rare species, there is very little information on biomechanisms of Eupilema inexpectata. However, two closely related species within the Rhizostomatidae family (Rhizostoma luteum and Rhopilema nomadica) have been shown to use pulsating motion to swim against current. In general, various true jellies have been shown to us a muscle contraction and relaxation mechanism to push water through the bell and propel them to aid their movement in water. The root-mouthed jellyfish also uses these modes of propulsion due to similarity in body plan and structure and this analogy is supported by documented data.

Jellyfish have long been considered simple animals with very simple and rudimentary nervous systems and no central nervous system. However, they have a nerve network that allow them complex reactionary mechanisms to external stimuli. Scyphozoan jellyfish possess pigmented photosensory cells that are approximate to eyes and have been shown to react to light stimulus. These jellyfish also have chemosensory structures that may help with finding prey, as well as sensory receptors known as statocysts that helps with balance and orientation. 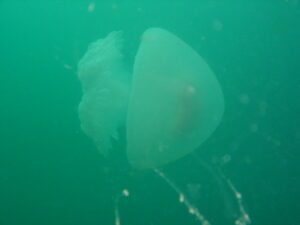 The species is endemic to South Africa, and it is found primarily in the waters around the southwestern Cape. The type specimen was caught in Hout Bay in the Western Cape. A record of Eupilema inexpectata is mentioned in Namibia, but its identification is doubtful.

The root-mouthed jellyfish is primarily found in pelagic environments near the southwestern shores of South Africa. This is species is relatively rare and it is possible that it is restricted to the colder temperate waters of the Benguela ecoregion (near the western shores of South Africa) and the warmer temperate waters of the Agulhas ecoregion (near the southern shores of South Africa). It has been encountered close to the ocean shelf near the shore and has been recorded stranded around intertidal zones at beaches. Other Rhizostomatid species which co-occur with Eupilema inexpectata have a wide distribution primarily along the eastern Atlantic coastal areas but also the temperate Mediterranean and Black seas.

Very few dietary studies of scyphozoan species have been conducted for southeastern Atlantic species, specifically those occurring along the eastern and southern shores of South Africa. However, due to lack of tentacles, it can be assumed that the root-mouthed jellyfish feeds primarily on microscopic zooplankton. However, the closely related Rhizostoma pulmo feeds on a wide variety of invertebrates, including other cnidarian species, crustaceans, dinoflagellates, molluscs, sea worms and phytoplankton.

The life cycle of the root-mouthed jellyfish has not been well established. However, the life cycle of scyphozoan jellyfish is generally consistent across the class, with a few exceptions. Most scyphozoans spend most of their adult life as medusae. With a very few exceptions, adult medusae are either female or male, but not both (in contrast to hermaphroditic animals). Generally, their life cycle starts as a fertilised egg that grows into a free-swimming planula, and then an immobile polyp that can propagate asexually and, finally, a free-swimming ephyra that grows into the adult medusa. Generally, fertilisation of eggs can be externally or internally. In the closely related Rhizostoma species, fertilisation takes place externally and the larval forms emerged as early as two days after fertilisation.

Courtship, if any, has rarely been observed in scyphozoan species. Much of the mating behaviour takes place as aggregations of individuals. Brooding of offspring has been observed across non-members of Rhizostomatidae. However, in Rhizostomatidae, brooding has only been observed in one species, Rhopilema verrilli while other rhizostomatids are considered non-brooding. Thus, it is much more likely that Eupilema inexpectata does not practise any pre- or post-reproductive affiliation to either offspring or mating partner, i.e., no family life. 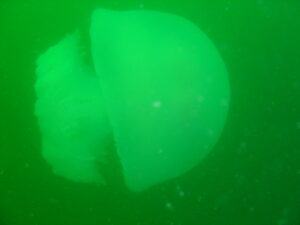 Root-mouthed jellyfish are parasitised by amphipods that can live within their body. The jellyfish is prey to a host of marine predators, including fish, sea turtles and potentially mammals (otters). Smaller fish can hide from other predators within the jellyfish and may feed on the parasitic amphipods. Jellyfish have a complex relationship with these small fish, as these fish can prey on the jellyfish and vice versa.

As cnidarians, root-mouthed jellyfish have specialised cells called cnidocytes that deliver a venomous sting. These are used by the jellyfish to either sting and incapacitate prey or as defence mechanism against predators. The jellyfish is also gelatinous and mostly transparent, which helps with camouflage into the surrounding water. Asexual reproduction gives the jellyfish alternative reproduction strategy to finding mating partners. The different life cycle stages help with various modes of dispersal. When food is scarce, jellyfish can metabolise their own tissues and shrink their size until food is available again.

On one hand, jellyfish are generally associated with negative impacts on humans and human activities. Jellyfish blooms have a negative impact on fish populations as they largely compete for food. As Eupilema inexpectata is a largely microzooplankton feeder, it potentially provides competition to other zooplankton feeding fish and important commercial microzooplankton feeding species. Species of Rhizostomatidae occurring in the Atlantic Ocean and adjacent temperate seas are experiencing much more frequent blooms and possible range expansions in recent years. As a rhizostomatid species in similar habitats, the root-mouthed jellyfish has a potential for blooms. In fact, scyphozoan jellyfish in the Benguela ecoregion have been experiencing blooms in recent years and negatively affecting fish populations as well as infrastructure. Furthermore, jellyfish are considered a health hazard for beach-goers as they can sting both in the water and when they are beached.

On the other hand, species in different genera of Rhizostomatidae make up almost 50% of edible jellyfish species in the world. In fact, all identified edible jellyfish species in 2001 were close relatives of Eupilema inexpectata (order Rhizostomeae). Much of the exploitation of jellyfish takes place in southeast Asia and, to some limited extent, in Europe. Although there is little evidence of use of jellyfish as food in southern Africa, this doesn’t exclude the potential use of the root-mouthed jellyfish as food. Southern African species across animal orders have recently been subjected to extensive exploitation for southeast Asian markets. Furthermore, rhizostomatid species produce compounds that have potential uses for biotechnological and commercial uses. Thus, potential exploitation of this species cannot be excluded at this moment.

Despite its endemicity and limited distribution, the conservation status of Eupilema inexpectata has not been assessed yet. Very little research has been done on the species.

The root-mouthed jellyfish may be the only species in the genus Eupilema. Two other species have been proposed, Eupilema scapulare and Eupilema claustra. However, there is no consensus whether either of the two species is valid or not. The closest relatives of the root-mouthed jellyfish are the members of the genera Nemopilema (Nomura’s jellyfish), Rhizostoma (barrel jellyfish) and Rhopilema (sand jellyfish) in the family Rhizostomatidae. In total, there are 12 described species in the family. Eupilema inexpectata is only the second described member of the family that has been recorded in South Africa, with the other being Rhizostoma luteum.

Official Common Name: Root-mouthed jellyfish
Scientific Name and Classification:
Kingdom: Animalia
Phylum: Cnidaria
Class: Scyphozoa
Order: Rhizostomeae
Family: Rhizostomatidae
Genus: Eupilema
Species: E. inexpectata Pages, Gili & Bouillon, 1992.
Common names: Root-mouthed jellyfish, root-mouthed jelly (Eng.)
Derivation of scientific name: Before this species was discovered, the validity of the genus Eupilema had been put into question as it was described from a single specimen. The only other species of Eupilema had been described from a specimen from Indonesia. Thus, both the unexpected discovery of Eupilema inexpectata, and the subsequent establishment of Eupilema as a valid genus, inspired the species name (inexpectata = ‘unexpected’).