Skip to content
Home » Animal of the week » Samango monkey 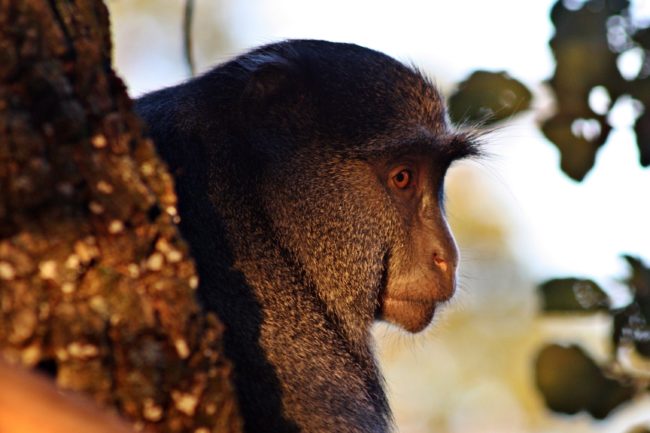 ‘Look up at the tree, what do I see, a samango monkey looking down at me.’

Samango and vervet monkeys look similar, however if one takes a closer look there are many differences. Samango monkeys have a grey face, black arms, grey, shaggy fur on the body with a yellow wash on the back and a defined pale grey to white collar line. In contrast, vervet monkeys have a black face, grey arms and legs, a slight green shine to the fur and the males have a visible blue scrotum.

There is a clear sexual dimorphism between male and female samango monkeys, with males being larger in body size, having longer canines and more pronounced color contrasts between the arms and body.

The taxonomy of samango monkeys is still disputed on both the species and subspecies level. While some authors list them under the C. mitis group (Napier 1981; Grubb et al. 2003; Lawes et al. 2013) others separate them under the species C. albogularis (Groves 2001, 2005). Regarding the subspecies, Meester et al. (1986) and Grubb et al. (2003) list two subspecies from the southern African region: C. a. labiatus and C. a. erythrarchus while Roberts (1951), Dendelot (1974) and Groves (2001, 2005) list an additional third subspecies, namely C. a. schwarzi. A study by Dalton et al. (2015) supports the identification of three distinct genetic entities namely; C. a. labiatus, C. a. erythrarchus and C. a. schwarzi.

Samango monkeys are quadrupedal climbers and leapers and spend most of the time travelling, resting and foraging in the forest canopy. Although they are largely arboreal, they can also be observed foraging on the ground, close to trees. Their tails are approximately a third longer than their bodies and help them balancing on tree branches and when leaping between trees.

Samango monkey males uses a characteristic ‘boom’ call, which is most frequently heard at dusk and dawn when they are most active (Lawes & Piper 1992). The ‘boom’ call is a low-pitched call that carries far in the forest canopy without losing attenuation. It is typically only emitted by the adult, resident group male and believed to repel predators and unwanted intruders. In addition to the ‘boom’, males emit another two distinctive calls, the ‘pyow’ and the ‘hacks’ or ‘ka-trains’.

These two calls have been described as predator alarm calls where the ‘pyow’ seems associated with leopards and the ‘ka-trains’ with eagles (Papworth et al. 2008), Samango monkeys further produce a variety of structurally diverse squeals.

Vocalizations in the squeal, whistle, scream and screech family are believed to be associated with a high arousal level and are usually emitted by adult females and youngsters of both sexes (Brow & Cannito 1995). In the wild, squeals may be emitted in the presence of a predator, during disturbances between mothers and young, or during inter-individual conflicts. Squeals may grade into chirps, which have an alarm function, or into trills, which typically serve as an affiliative contact solicitation call (Brown & Cannito 1995).

Samango monkeys have a restricted distribution in South Africa due to their close affiliation with indigenous, high canopy, evergreen forests. They are the country’s only exclusively forest-dwelling guenon. They are distributed from northern Limpopo Province to Mpumalanga into KwaZulu Natal and down to the Eastern Cape.

The distribution of C. a. schwarzi comprises Mariepskop in the Pilgrims Rest District, north to the Magoebaskloof area including Woodbush (Mpumalanga Province) (Roberts 1951; Groves 2001), as well as the Soutpansberg mountains in northern Limpopo Province (Dalton et al. 2015).

C. a. erythrarchus occurs in South Africa, Zimbabwe, Mozambique and up to Malawi. Within South Africa it occurs from southern Mpumalanga Province to northern KwaZulu-Natal Province (Dalton et al. 2015). Lastly, C. a. labiatus is endemic to South Africa and its southern range limit is the Pirie Forest in the Eastern Cape (it is not found in the evergreen Knysna and Tsitsikamma forests further south) from there it extends northeastwards to the midlands of the KwaZulu-Natal Province (Lawes 1990). 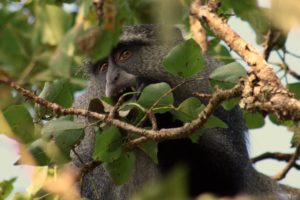 Samango monkeys inhabit high-canopy, evergreen indigenous forests such as Afromontane/mistbelt, scarp and coastal belt forests (Lawes 1990; Hayward et al. 2005). Due to the recent and rapid fragmentation of forest habitats in South Africa, resulting from the conversion of land for agriculture and urbanisation (Friedmann & Daly 2004; Kingdon et al. 2008), samango monkeys are currently restricted to isolated or semi-isolated forest fragments with little or no connectivity between patches (Linden et al. 2016).

Although they preferentially forage in indigenous forests (Nowak et al. 2017), they will in certain cases use habitat such as acacia woodland and forest thicket (Lawes & Piper 1992; Emerson & Brown 2013; Linden 2020) or various human-modified habitats (Linden et al. 2020a). Samangos are considered poor dispersers and are generally reluctant to travel on open ground (Lawes 1992, 2002; Lawes et al. 2000). As such, isolated samango populations are at risk of local extinction (Linden et al. 2016).

Samango monkeys are diurnal and spend the night high up in the canopy of large trees. During the day they spend most of their time feeding and foraging for food. When not engaged in feeding related activities, samango monkeys spend time on social activities such as grooming and playing. Samango monkeys are known to use a wide variety of forest plant species with a significant part of their diet comprising fruit (Lawes et al. 1990; Linden et al. 2015).

Samango monkeys are philopatric and live in multifemale groups led by a single adult male (Cords 2001). Males are evicted from their maternal group approximately a year before reaching sexual maturity (Henzi & Lawes 1987). Tenure of the group male lasts between 5 months and 3.5 years and resident group males are regularly contested by outside males during breeding seasons (Butynski 1990).

Lone males or bachelor groups not associated with groups of females are common and it is not unusual for these males to ‘sneak mate’ with group females during breeding season (Henzi & Lawes 1987; Macleod et al. 2002; Roberts & Cords 2015).

The age of first conception is around 7 years and a new infant is born after 2–3 years if the previous one survives the first year (Cords 2012). Samango monkeys are territorial and females defend their territories aggressively against neighboring groups (Lawes & Henzi 1995). Resident group males defend their mating rights from non-resident males. Male–male fights can be very aggressive, sometimes causing severe injuries. 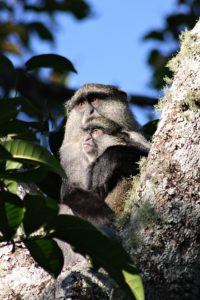 During the winter, when food is scarce, samango monkeys will forage outside indigenous forest. Monkeys will go into human-modified habitat such as gardens to feed on exotic species such as acorns, despite potential threats from humans and other animals such as dogs. However, when given a choice, monkeys prefer the safer forest habitat rather than obtaining high-value food in gardens (Nowak et al. 2017).

In the Soutpansberg they were found to disperse the seeds of 22 plant species via defecation, cheek pouch carrying and spitting or dropping, indicating that they play an important role in maintaining forest plant diversity and regeneration (Linden et al. 2015). Furthermore, through their foraging behaviour, samango monkeys were found to make fruit available to ground dwelling mammals such as bush pig (Potamochoerus porcus), red duiker (Cephalophus natalensis) and porcupine (Hystrix africaeaustralis), which may act as subsequent seed dispersers (Seufert et al. 2009).

Requests to researchers for samango skulls and hands by traditional healers were also experienced in the Soutpansberg area (B. Linden unpubl. data). Intact snares found on samango monkeys and an infant samango being sold might indicate utilisation on a subsistence level for bushmeat in certain areas (for example, Hogsback K. Wimberger pers. obs. 2011).

In South Africa samango monkeys are threatened due to ongoing habitat loss of indigenous forest habitats and a decline in habitat quality because of commercial forestry plantations (Linden et al. 2016). Populations are undergoing further declines due to the loss of mature individuals from road collisions, electrocutions on power lines, and snaring and hunting for use in traditional medicine (Linden et al. 2016; Linden et al. 2020a).

However, the effects of hunting are assumed to be minimal as they are not a targeted species. Conservation management plans should be separated for each subspecies to prevent the loss of genetic diversity, with protected area expansion, corridor creation and strict management of indigenous forest habitats as key intervention strategies (Linden et al. 2016). Road fatalities should be mitigated through canopy bridges installed at identified road crossing hot spots (Linden et al. 2020a).

Guenons are widespread across and endemic to sub-Saharan Africa (41 countries) and the samango monkey represents the southernmost distribution of arboreal guenons (Ukisintambara & Thébaud 2002).

A phylogeographic study on samango monkey populations in South Africa and Mozambique suggests that samangos first migrated into South Africa along the Afromontane forest belt in the mid-Pleistocene (0.71 MYA–0.86 MYA) where populations persisted throughout the Last Glacial Maximum and from which they subsequently recolonised (re)established coastal belt forests (e.g. along the KwaZulu Natal coast) during the past ~10 000 years (Linden et al. 2020b).