Skip to content
Home » Animal of the week » Secretarybird 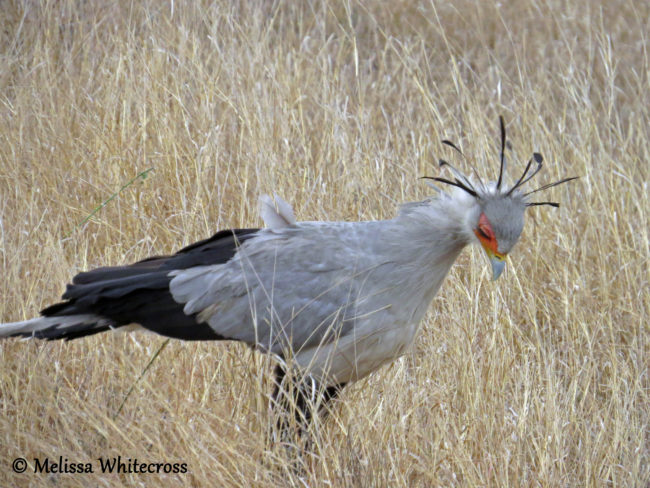 The Secretarybird is a large-bodied bird of prey that has a peculiar appearance compared to other raptors.

Description:
The Secretarybird is a large-bodied bird of prey with an eagle-like head and crane-like legs. They are 0.9 to 1.2 m tall and weigh between 2.3 and 4.27 kg. Sexual dimorphism is clearly observed in Secretarybirds with males being slightly larger than females. The female wing span ranges between 1.2 and 1.32 m while the male wingspan ranges between 1.26 and 1.35 m.

The feathers of the crown, upper parts and median wings are blue-grey in colour. The underparts and underwing feathers are light grey to grey-white. The crest is made up of long black feathers coming from the nape. The primary, secondary, thigh, rump and flight feathers are black. The tail is wedge-shaped with white tips, and grey and black colouring at the base.

Young Secretarybirds look similar to adults, with a few exceptions. The colour of the bare skin is yellow in juveniles rather than red or orange as seen in adults. In addition, juveniles have brown under-coverts and black colouration on the tips of the shoulder feathers. The crest and tail feathers of juveniles are also shorter compared to adults.

Getting around:
Like most birds, Secretarybirds can fly, although they prefer walking. Secretarybirds spend most of the day walking around whilst foraging. On average, they walk 20 to 30 km a day. Nonetheless Secretarybirds fly really well even at greater heights. When threatened, they will first run before they fly.

Secretarybirds are generally silent, although they can produce calls such as a deep croaking sound that can be heard from a distance, as well as a growling noise. Both of these calls are used in combination during aerial and ground courtship displays. When feeding their young, Secretarybirds usually make a soft version of the main call. 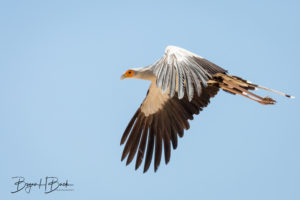 While they prefer the savannah biome with scattered thorn trees (Senegalia and Vachellia spp.) and short grasses, which allow them to easily see whilst walking and feeding. Secretarybirds can also be found in semi-deserts and areas that have shrubs. They are frequently found in agricultural areas that offer hunting opportunities. Secretarybirds are known to cover approximately 32km a day walking and feeding. These birds are not migratory.

Secretarybirds are considered to be opportunistic predators with a wide prey base. Most of their diet is made up of arthropods such as grasshoppers, beetles, wasps, spiders and scorpions. They also feed on small mammals including mice, rats, hedgehogs, hares, mongoose and squirrels. Their diet also include reptiles, small birds, amphibians, eggs and freshwater crabs.

Contrary to popular belief, Secretarybirds do not always eat or hunt snakes, although venomous snakes have been recorded in their diet. They hunt on the ground alone or in pairs, and when prey is encountered they will chase the prey. When snakes are hunted, they are trampled to death.

Secretarybirds are monogamous and are thought to pair for life. During courtship they make a croaking sound while displaying in the air or on the ground. The male will usually perform an aerial display where he will soar high in the sky and dive down towards the female. On the ground, the courtship display is said to be crane-like where both birds dance together with their wings open.

Mating generally takes place on the ground, although they also mate in trees. Breeding takes place throughout the year, however, there are peaks in breeding behaviour from August to March. The nest, which is constructed by both sexes, is usually on a big flat-topped tree, such as Senegalia or Vachellia spp., or other medium-sized trees in grassland areas.

Secretarybirds are sometimes solitary, however, they are more often found in pairs or family groups consisting of up to five individuals. At times, large aggregations of Secretarybirds may form near an abundant food source or watering hole, although these groups do not remain for long.

Secretarybirds prey on a wide variety of large and small vertebrates and invertebrates. According to literature, Secretarybirds seem to have little effect on these wild populations. However, smaller localised populations may be affected by over-hunting.

Secretarybirds are only vulnerable to predation as eggs and young birds in the nest. Known predators include crows, ravens, Ground Hornbills, eagle-owls and other raptors.

Secretarybirds are well known for their hunting behaviour where they stomp their prey to death. Sometimes they throw their prey high up in the sky. While these birds are known to hunt venomous snakes, they are not immune to snake venom. They approach snakes with caution and make sure the snake is dead before consuming it. 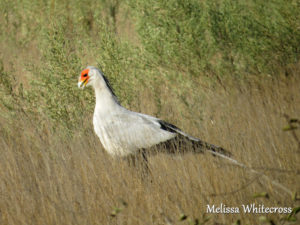 Poorer world without me:

They can provide pest control services as they prey on small and large mammals and invertebrates that feed on crops.

Conservation status and what the future holds:

The Secretarybird’s global conservation status was last assessed in April 2020 and it was listed as Endangered (EN). The species is threatened by habitat loss and degradation caused by residential and commercial development. Their habitat is also lost due to agricultural farming. The species is also hunted, captured and traded in the international pet trade, although this occurs in small numbers.

Official Common Name: Secretarybird
Common names: Secretarybird (Eng.); sekretarisvoël (Afr.); iNtungunono (isiZulu); ingxangxosi (isiXhosa); mukonlipeli (Sesotho)
Scientific Name and Classification:
Kingdom: Animalia
Phylum: Chordata
Class: Aves
Order: Accipitriformes
Family: Sagittaridae,
Genus: Sagittarius
Species: Sagittarius serpentarius (J.F.Miller, 1779)
Derivation of scientific name:
The Secretarybird was first named by a Dutch naturalist, Arnout Vosmaer, in 1769 on the basis of a live specimen that had been sent to Holland from Cape Town. He suggested that the species should be named Sagittarius because its gait resembles that of an archer.

In 1779, an English biologist, John Frederick Miller, named the bird Falco serpentarius. The bird was later assigned its own genus Sagittarius by John Herman of France, and it was officially named Sagittarius serpentarius. The secretary bird was named as such because of the long quill-like feathers on its neck, which resemble a quill pen tucked behind the ear of a scribe.