Skip to content
Home » Animal of the week » Serval 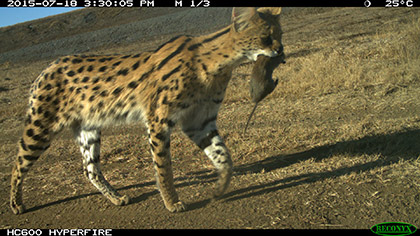 The tallest of Africa’s small cats, with long legs and very prominent ears, servals have the ability to jump 2–3 m up in the air to pluck a bird in flight from the air.

How to recognise a serval

The serval is a medium-sized, strong yet slender cat, measuring 54–66 cm at the shoulder and can be recognised by its large, almost oval-shaped ears and unique fur pattern. The fur is boldly spotted black on tawny, with two or four prominent black stripes from the top of the head down the head and back, transitioning into spots. The pattern varies among individuals.

The tail is short, only about half the length of the hind leg, and the tip of the tail is black. The ears are black with a white line between them. Relative to its body size, it has the longest legs of any cat. The head is small in relation to the body. Body weight ranges from about 7 to 12 kg in females, and from 9 to 18 kg in males.
Getting around

Servals are primarily nocturnal hunters, though more diurnal than most cats. They are very active in the early morning hours, up to about 10:00 or 11:00, and again in the late afternoon, after 16:00 to 17:00 into the evening. They are specialists in catching rodents and birds in tall grass. They not only can jump high and far, but they also have a wonderful ability to swerve and change direction at full speed.

Servals, like many other cats are able to purr. They also make a high-pitched chirp, and can hiss, crackle, growl, grunt and meow. Chemical communication of adults is limited to scent marking emitted from urine and glands in the cheeks. During aggressive displays serval will throw its head up and down rather than sideways like most other cats, and an aggressor may prod its opponent with an outstretched foreleg. A female trying to persuade her kittens to go into hiding may grow and spit at the kittens to drive them into hiding.

Servals occur widely through sub-Saharan Africa, with the exception of tropical rainforest and the Saharan desert. Within South Africa, during the latter half of the 20th century, the serval was considered extinct, or near extinct, in many areas of its historical range, primarily due to persecution as a damage-causing animal and competitive exclusion by expanding caracal populations.

As a result of the successful reintroduction of serval into many areas within its natural historical distribution range, and the natural dispersal of the species in other areas, servals have successfully re-colonised many areas where they were previously considered rare or extinct. Currently servals occur in all nine provinces, but are associated more with the wetter eastern parts of the country, including the provinces of KwaZulu-Natal, Mpumalanga, Limpopo and the north-eastern parts of the North West.

In sub-Saharan Africa, servals are mostly found in and around marshland, well-watered long-grass savannah environments, and are particularly associated with reed beds and other riparian vegetation types. Servals can penetrate dense forest along waterways and through grassy patches and are able to tolerate agricultural areas to some extent, provided cover is available and appropriate wetland habitat (and thus areas where murid rodents thrive)is conserved or created. Serval population densities have been found to be similar between farms with various management intensities in the Drakensberg midlands of KwaZulu-Natal.

Within South Africa the species occupy moist savannah, marshland and tall grasslands. It can subsist away from wetlands, as long as good grass cover is available, and artificial wetlands in dam outflows are utilised. These habitats are being increasingly created through wildlife ranches and agricultural systems. Although these habitats are partly fragmented, servals are able to connect with other subpopulations through corridors such as drainage lines to ameliorate fragmentation effects.

Servals have a broad diet, ranging from birds to fish, however they primarily feed on small mammals, especially rodents. Their diet consists of 93.5% small mammals (rats, mice, and shrews) and 5% birds with the occasional insects, frogs, lizards, and very rarely carrion making up the remainder of their diet. They are very efficient hunters and their hunting success rate of 48% is higher than any other member of the family Felidae.

Little has been recorded on the sexual behaviour of this cat. Servals are considered polygamous and the territories of males overlap with those of several females. Breeding can occur throughout the year, but there seem to be a peak during spring. An oestrus female will hunt with and court a male over several days. After a gestation period of approximately 65–75 days, the female gives birth to a litter of two to four kittens. The kittens are hidden in dense vegetation and often moved by the female.

They are weaned in five months and can stay with their mother for up to year. Young males are driven away as soon as they are able to hunt successfully, whereas daughters are tolerated for much longer. The kittens reach sexual maturity between 18 and 24 months, round about the time they become independent. Servals are estimated to live up to 10 years in the wild, however in captivity they have been recorded to live much longer.

Servals are particularly vulnerable to predators such as spotted hyenas, leopards and wild dog, especially in areas without high grass cover. They are to some extent tolerant of farming practices provided there is cover, wetlands and good food availability. The occurrence of servals in farmlands is probably enhanced by the relatively low density of large carnivore or competing carnivores such as caracal and African wild cat.

The serval’s big ears and long legs make it extremely adaptable to hunting rats, mice and other rodents and birds that live in tall grass. They have an acute sense of hearing. The closely set ears contain 22 muscles each, allowing them to rotate up to 180 degrees independently of each other, and allows them to pick up and pinpoint noises made by prey, even underground. When hunting, the long legs of the serval assist it to see over and into the grass and to make a high leap as it pounces. It can leap up to 2-3 m into the air to catch birds.

Servals are wetland specialists and thus important due to their specialised habitat requirements, which allows them to serve as a useful ecosystem indicator of the effect of habitat fragmentation in South Africa and for wetland conservation. Further, being a predator of rodents its value is in its role in controlling the numbers of these agricultural pests.

Servals are utilised in the traditional medicine trade and the skins are used for traditional regalia. Trade in West Africa and South Africa appears to be primarily for ceremonial or medicinal purposes. The species is further in demand by local and international hunters as a hunting trophy. They are also sometimes mistakenly persecuted as a damage-causing animal.

Servals are found in many protected areas within South Africa and are included on CITES Appendix II and protected under national legislation (TOPS regulations). It is listed as Least Concern globally and Near Threatened nationally on the IUCN Red List. Effective conservation of serval depends on the conservation of wetlands, particularly wetlands in fragmented landscapes. Wetlands form an island habitat in a mosaic of farmland for several wetland-dependent species; they are reservoirs of small mammal populations that are major dietary components of servals. Consequently if wetlands are protected in a mosaic of farmland use, the landscape may support the persistence of serval populations.

There are currently 19 recognised subspecies; however some authorities treat several of these as synonyms. A recent molecular phylogeny reveals that the serval is closely allied to the African golden cat, Caracal aurata, and caracal, Caracal caracal, diverging from a common ancestor approximately 5.4 million years ago, though it is distinct enough to be classified in a monospecific genus. They are members of the cat family, Felidae. Southern African members of this family include the big cats, lion (Panthera leo), leopard (P. pardas) and the cheetah (Acynonyx jubatus), as well as the small cats: the southern subspecies of African wild cat (Felis silvestris cafra), black-footed cat (F. nigripes) and caracal (Caracal caracal). Another subspecies of African wild cat, Felis silvestris lybica, occurs further north in Africa. Domestic cats (Felis catus) are also part of this family.