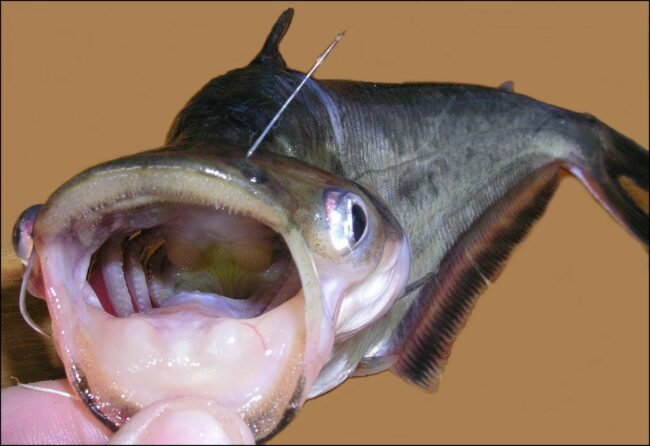 Schilbe intermedius, also known as Silver butter catfish, is native to Africa. It is sexually dimorphic, with females growing larger than males. The species reach its  maturity at a length of 14 cm in male and 17 cm in female. The silver butter catfish is silver-grey, somewhat darker colour on top and an olive-brown head. It has large shovel mouth surrounded by 4-6 nasal barbs.

Silver butter catfish moves moderately slowly but it does move faster when necessary. During the day, the fish prefers to remain stationary at the bottom of the water body.

Water-movements and incidental sound produced as by-product of locomotion maybe used to communicate possible danger to other species. As a response to danger alert, species will move faster in order to escape the danger.

This species is widespread in sub-Saharan Africa from the Senegal River across to Somalia and south as far as the Pongola River in South Africa. In South Africa, it is only found in the northern region (Limpopo and Mpumalanga province) and absent south of Pongola River.

Silver butter catfish is usually found in shallow waters, in both lacustrine and fluviatile conditions. it often shows shoaling habits and seems to prefer large rivers and lakes and seemingly hardly enters small rivers or small affluents. The species usually found at the bottom of the waterbody and migrate to the surface at night to feed in the surface area.

Silver butter catfish is a surface feeder which is active mostly during the night. They feed from mid and surface waters on a wide variety of foods, including small fish, insects, shrimps, snails, freshwater prawns and other crustaceans, algae and bottom-living and planktonic organisms.

Silver butter catfish breed during rainy season. It spawns its eggs on submerged aquatic vegetation. Rainy season creates an opportunity for the spawning of eggs on aquatic vegetation because rainwater overflows river channels into floodplains. Rainy season does not only provides suitable conditions for eggs spawning but also nursery habitats, water oxygenation conditions and food resources for newly hatched larvae.

Because silver butter fish like to stick together, they are usually found in groups of 3 or more.

Since females species of  Silver butter catfish are larger than males, they are  more susceptible to fishing than male species. Even though females are prone to fishing than male, female population never gets exploited because the species reproduce more females than males.  The dorsal fin are modified into spines, rendering it dangerous to the opponent when it draw near it.

The silver butter catfish is one of the top predators in most lakes, rivers and floodplains where they habit. The species is important in regulating small fish populations in the fresh water ecosystem.

This species is commercially used in aquaculture and there is heavy fishing pressure, but the species is highly abundant and reproduce many offspring. In eastern Africa the species is also threatened by biotope changes, for example as caused by invasive species. No serious threats have been identified except the overexploitation occurring in three  lakes, that is Lakes Victoria, Kyoga and Nabugabo.

The International Union for Conservation of Nature (IUCN) Red List listed Silver butter catfish as a Least Concern species. There are no conservation actions known to be in place up to so far. The population trend should be monitored.