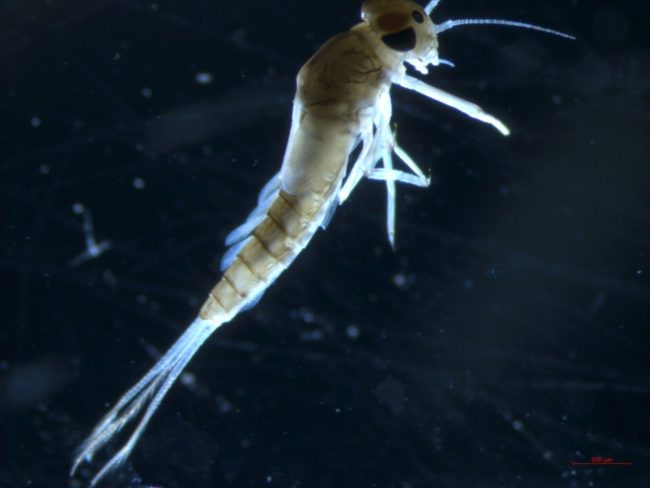 Mayflies of the order Ephemeroptera include an ancient lineage of insects that date back to the early Permian period, some 290 Mya. They are believed to be the most primitive and ancient of the living insect groups. Their prehistoric origin and widespread distribution make them suitable candidates to study biogeography. The global diversification of this group together with its presence on islands is believed to be the result of ancient continental drift (Monaghan et al. 2005).

Baetis harrisoni is a robust type of a small minnow mayfly frequently encountered in river studies of South Africa. It is normally used under laboratory conditions to investigate its tolerance levels against a variety of environmental factors (Dabrowski et al. 2005).

All small minnow mayflies are characterised by a small spindle-shaped body with leaf-shaped gills on either side of the abdomen. The long antennae is one of the most apparent features of this group.

Their colour vary from light sand to dark brown depending on the environmental conditions they are exposed to. They normally have three tails, but there are some species of this family that have two tails. Other primitive features include well developed mouthparts, a large head and stout legs (Gerber & Gabriel, 2002). 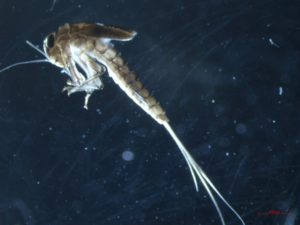 The locomotory routine of aquatic organisms is influenced by abiotic factors like temperature, viscosity and velocity of the water. The nymphs of Baetis are normally excellent swimmers, but they lose their ability to swim upon emerging from water.

Their movement to the surface of the water is by dead-drifting, but this makes them prone to predation by trout. To move through the surface film, the female Baetis folds its wings around the abdomen then submerge under water to lay eggs (Kutash & Craig 1998).

Baetis harrisoni mayflies have a Afrotropical realm distribution (FADA Ephemeroptera 2019). In South Africa, they occur throughout the south and eastern parts of the country. This include biomes and climates with winter rainfall, the southwest Cape Floristic Region, as well as the southeastern Albany Thicket region and also the subtropical regions of the northeastern Savanna (da-Conceicoa et al. 2012).

Their distribution in the western and southern Cape is influenced by the acidity of the rivers. The broad geographic distribution of Baetis harrisoni and its tolerance to varying environmental conditions suggest an existence of a cryptic species associated with the name.

It was initially believed that the dispersal range of Baetis harrisoni is limited to nearby water bodies due to their weak ability to fly over long distances. However, a study conducted by da-Conceicoa et al. (2012) suggested that long distance dispersal of this species may be possible.

Baetis harrisoni is a freshwater species that inhabits slow to fast moving waters. They are riffle-dwelling organisms that are well suited to survive even in artificial streams during toxicity studies. The nymphs are found primarily in streams under small to medium stones, sediments and in decaying vegetation. There are individuals of Baetis harrisoni that have been reported in heavily polluted streams with a pH range of 2–10.

The life cycle of small minnow mayflies consists of four stages, namely egg, nymph, sub-imago and the imago stages. Males start by forming a swarm on the surface of the water and the females fly into the swarm for mating.

This is followed by the male grabbing the female using its elongated legs and mating occurs in flight. After copulation, the female is released to lay eggs under water and then advance to die on the nearby land.

The nymph stage is the dominant life history stage of Baetis harrisoni. The first adult form is the sub-imago stage, which emerges from the water to seek shelter in riparian vegetation.

After a few hours, this sub-imago sheds its skin and transform to an imago stage (sexually mature adult). During this period, the adult female mates and then lay eggs under water. The hatching of the egg depends on water parameters like temperature.

Mayflies do not have a family life. Adults have a short life span of approximately a few hours; this is because the sole function of the adult stage is to reproduce.

Algae-feeding invertebrates are always at risk of predation by benthic-feeding fish. The foraging behaviour of small minnow mayflies make them easy prey for the rainbow trout.

The imago and sub-imago stages of the Baetis group have adapted responses to selection pressure from predators. In the sub-imago stage, the mayfly experience difficulties during flight, which makes it vulnerable to predation. The shortness of their wings during these stages is an adaptation that reduces their exposure to predators.

A mating strategy adopted by males is their participation in swarming to attract females, which then fly into the swarm where mating occurs almost immediately. The majority of swarms are orientated by terrain markers like vegetation or shoreline.

Females also have an oviposition behaviour whereby they land on partially submerged stones then fold their wings so they can move around in search of a suitable deposition site for their eggs.

Out of all the mayfly groups, Baetis species are recognised as the most highly sensitive group and are therefore used as indicators when monitoring the water quality of a freshwater system (Nerbonne & Vondracek 2001). This is because this species is only adapted to survive within specific ranges of water parameters so anything outside of these ranges pose a threat to their survival (Hamid & Rawi 2017).

Their abundance is used to make conclusions about the pollution status of that system. They also serve as an essential food source for many fish species (like trout) and aquatic invertebrates in the food web. Lastly, they also function as an important tool for assessing the conservation status of inland wetland habitats.

Small minnow mayflies are normally used by anglers as bait to attract trout.

The loss of habitat and reduction in connectivity between freshwater systems is a major threat to the biodiversity of mayflies in temperature regions.

According to the GBIF database, there are 595 captured occurrences of Baetis harrisoni in South Africa with majority (91.1%) of them being preserved specimen whereas the remaining 8.1% is unknown.

Dipuo Evelyn Makhubela is thanked for the pictures of the Baetis harrisoni species from her honours project at the University of Johannesburg.