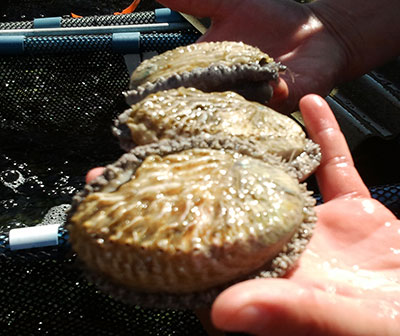 South African abalone, mostly known locally as perlemoen (from the Dutch meaning ‘mother-of-pearl’), is endemic to the shores of South Africa. This economically important species is highly utilised and has a high market value. It is therefore one of the most sought-after invertebrates in the country.

How to recognise abalone

Haliotis midae is one of five South African endemic abalone species. The others are Haliotis parva, H. spadicea, H. queketti and H. speciosa (Evans et al. 2004). They are marine snails that are associated with rocky areas.

Haliotis midae has a flattened, ear-shaped shell with a wide opening at the base – unlike their terrestrial snail cousins that have spiral shells (Attwood 2000). It also has a row of small holes through which water escapes after aerating the gills. South African abalone has a muscular foot running along the wide open base (Lyons 2011). The shell covers the dorsal part of the body leaving some fleshy parts protruding from the side.

They are the biggest abalones of the five indigenous species, growing to 230 mm in size (Van der Merwe 2009). Males and females can be told apart by looking at their gonads (reproductive parts); males have cream-coloured gonads while females have green-coloured gonads (Visser-Roux 2011).

Similar to terrestrial snails, South African abalone moves by creating a series of wave-like movements across the muscular foot, which propels them forward. They also use the foot for gripping on rocks (Attwood 2000).

South African abalone has a wide but patchy distribution. It is distributed along the coast of Port St. Johns in the Eastern Cape through to Saldanha Bay in the Western Cape (Rhodes 2013; Visser-Roux 2011).

South African abalone is generally found in shallow coastal waters and seems to prefer rocky surroundings (Van der Merwe 2009). Juvenile abalone associate themselves with sea urchins, Parechinus angulosus, which they depend upon for protection (Slabbert 2010).

Abalones in general are herbivorous (Makhande 2008) and feed mainly on kelp and red- and green algae. They catch floating or overhanging kelp by raising the front part of their body and extending the far end of their foot (Cloete 2008). Floating, overhanging kelp or algae that come into contact with the foot are trapped and fed on (Cloete 2008). If a large enough kelp is caught then the neighbours also join in and feed. Abalone farming usually alternates sea weeds with synthetic food as food sources (Francis et al. 2008)

Wood and Buxton (1996) showed that the breeding season of South African abalone is between March and October, with spawning peaking between April and June. Temperatures have a large impact on larval development. High temperatures are associated with prevention or even termination of larval development, while low temperatures are associated with longer duration of the larval stage. The temperature must be warm, at around 18°C for South African abalone (Visser-Roux 2011).

After fertilisation, abalone goes through different developmental stages. At the juvenile stage, South African abalones start looking for areas where they can settle and be safe (Visser-Roux 2011). This can range from rocky areas to patching themselves to sea urchins until their shells become strong enough to protect them from most predators. According to Steinberg (2005), South African abalones are believed to live up to 30 years. They reach sexual maturity at around 20–25 mm shell width (Wood & Buxton 1996) or around seven years of age (Attwood 2000).

South African abalones live in groups. Attwood (2000) commented that this group lifestyle helps to increase the chances of success during breeding season.

Juvenile abalones associate themselves with sea urchins for protection. There is scientific evidence that population decline in sea urchins results in population decline in abalones (Makhande 2008). Rock lobsters predate mostly on small invertebrates including sea urchins (Cloete 2008). Octopus and eagle rays are also known to feed on juvenile abalones (Attwood 2000). The biggest threat to South African abalones is humans. Combined pressure of commercial harvesting and poaching have had a big impact, jeopardising the survival of wild populations (Edwards & Plaganyi 2008).

Abalones have high fecundity (reproduction rates), making them reproduce often and with many offspring (Wood & Buxton 1996). The high reproductive rate is believed to be responsible for the species’ survival, despite naturally small population numbers and the enormous impact of human activities on the species. Moreover, mutualistic relationships with poisonous and mostly spine covered species also provides some level of protection and increase their chances of survival.

Abalones feed on sea weeds and floating weeds, thus acting as their biological control (Hamer et al. 2010) and also helps with the cleaning of the ocean.

Abalones have long been used as a seafood resource around the world. In South Africa commercial use of Haliotis midae started around 1980 (Franchini et al. 2011). Because of how highly sort after South African abalone is, it became highly valued and economically important, especially in the aquaculture industry (Visser-Roux 2011). It is the most exported species in aquaculture, and in 2008 constituted 81% of the total income of national aquaculture (Britz et al. 2009). This is because of the high demand in Asian countries, where almost all exports go to (Steinberg 2005).

South African abalone, together with other marine life that serves as seafood, have been found to have an increasingly high medical impact – causing food allergies – although at the moment it impacts only a small population (Lopata & Jeebhag, 2007). It induces allergic reactions and asthma attacks. Care must be taken if ever one wants to enjoy a plate of South African abalone for the first time.

The increasing pressure put on South African abalone by both legal and illegal harvesting had led to the banning of abalone harvesting and listing thereof on CITES in Appendix 3 and in the National Environmental Management: Biodiversity Act 10 of 2004 (NEMBA). They were then removed from both CITES and NEMBA because of pressure from the fishing industry (Raemaekers et al. 2011).

South African abalone hasn’t been fully assessed, although a few assessments done by researchers show the studied populations to be declining (UNEP-WCMC, 2010). The fact that they have a slow growth rate makes them vulnerable to impacts of overharvesting (Attwood 2000). Immediate full assessments and research on wild populations are needed so proper planning for protection and sustainable use can be done. Current management strategies put in place seem to have little effect in protecting this species, and continued pressure and unsustainable use seem to persist (Raemaekers et al. 2011).