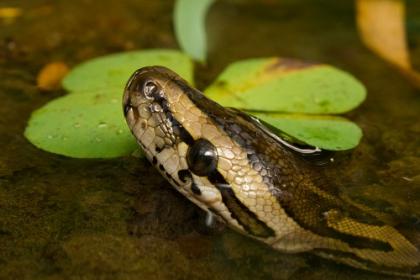 The genus name, python, is a Greek word referring to the large serpent ‘Delphi’, slain by Apollo in Greek mythology; natalensis refers to the South African province, KwaZulu-Natal.

Growing up to ± 5 m, the southern African python is the largest snake in southern Africa. A lot of legends and myths are told about this snake in most African cultures. The striking patterns and colours of it skin attract many people hence it used to make bags, shoes, belts and many other human accessories.

Description/How to recognise a python?

Python natalensis, which is commonly known as the southern African python, is a very solid and heavily built snake. The males can weigh up to 44 kg and reach up to 4.25 m in length; whereas the females can weigh up to 55 kg and reach 5.0 m in length. Further north in Africa, they can grow up to 6 m in length, but it is very rare to find such large pythons these days. They are dark brown in colour with grey-brown blotches and dark speckling all over the body.

The underside is white to dirty white with dark blotches. The body scales are very small and smooth. Juvenile snakes are more brightly marked. It has a triangular head with an arrow-shaped mark on the crown, and a dark lines on each side of the head extending from just in front of the eyes (sometimes from the tip of the ‘nose’) to the broadest part of the head. They have heats-sensitive pits on or between the lip scales, which help to detect infra-red radiation – in other words they allow the snake to see warm-blooded prey in the dark or even when blinded/hidden.

Southern African pythons are fairly widespread, and prefer habitats such as rocky outcrops, moist savanna regions and lowland forest. They can be found in water and often dives into deep pools where they can remain for long periods with only the head sticking out.

Southern African python, like most snakes, flicks it forked tongue to detect chemicals/odours in its surroundings and to identify possible prey around it. When it flicks its tongue, it picks up pheromones that was left by its prey or other snakes and the Jacobson’s organ (also called vomeronasal organ), which is found in the mouth, will help the snake to smell and identify the location from which the odour/chemicals came from. It may also hiss from time to time, especially as a warning sign. Southern African pythons do not have venom glands, but they can give a very nasty bite if threatened as a defence mechanism. The bite can damage tissue and cause infections if not properly treated.

Fairly widespread throughout African countries, but in southern Africa it is restricted mainly to the Lowveld, reaching KwaZulu-Natal’s south coast and extending all the way up the Limpopo River valley to Lobatse in Botswana as well as into the Northern Cape. In the Eastern Cape they have been considered to be extinct since 1927, but some records suggest that it may still occur in some remote areas.

Southern African pythons prefer rocky outcrops in arid and moist savanna and in lowland forest. They are most active at night, but they can also be found basking in the sun, especially after a large meal. They are good climbers and can be found lying up on tree branches. Southern African pythons are also very fond of water, in which they may lie and hunt. They dive into deep pools and remain submerged for long periods.

Their diet includes dassies, cane rats, hares, monkeys, small antelopes and game birds. They also feed on fishes, monitor lizards and crocodiles. Juveniles consume mostly ground-living birds and rodents. Large Southern African pythons can also swallow very large prey, but they become very vulnerable to be attacked by wild dogs and hyenas when swollen with food. They ambush their prey and constrict them before swallowing them. They may go for long periods without food, especially if their last meal was a large one.

Southern African pythons can live to more than 27 years old and sexually maturity is reached in three to five years, when they reach lengths of about two to three metres. In early spring, snakes get together to mate, the male usually locating a female by following pheromones she leaves behind. They are oviparous, which means they lay eggs and incubate them externally, the female will lay 30–50 eggs; up to more than 100 eggs in very large females. The female chooses a nesting site – mostly in disused termite nests, aardvark burrows, caves and many more. She will coil herself around her eggs and remain there until they hatch. During this period the female snake will not feed, but she might leave the site to go and drink. After two to three months, the eggs will hatch.

The females and males are normally found together during mating season. The young are about 45–60 cm in length, and they mostly move off on their own and are unprotected by the female once they have hatched. However recent research indicates that hatchlings of Southern African pythons may remain with the female for several days after hatching, constantly leaving the burrow during the day to bask, but returning to the protective coils of the female at night.

Southern African python control the dassie and rat populations, and in return they are preyed upon by hyenas, wild dogs, mongooses, meerkat, crocodiles and other snakes.

A southern African python ambushes its prey when it least expects it and constricts the prey. It hides its whole body in the water exposing only a portion of the head while monitoring its surrounding for its next prey.

Southern African pythons are a valuable aid in controlling dassies and cane rats, especially in KwaZulu-Natal sugarcane fields. This benefits the farmers greatly.

Southern African pythons are important snakes in most African cultures, used by most traditional healers as a way to communicate with ancestors or as a way of getting strength to heal people. It is also killed by traditional healers for it oils and skin, which they use medicinally. Its skin is also used for fashion purposes making bags, belts, shoes and many other accessories. Many years ago pythons were known to kill humans, but today large individuals are very rare; hence human death due to Southern African python are very unlikely.

Southern African pythons are protected in southern Africa as Vulnerable in the latest South African Red Data Book, and may not be captured or killed.

In South Africa it is the only one of its kind; a very large and bulky snake that cannot be easily confused with other snakes.