Skip to content
Home » Animal of the week » Southern Ground-Hornbill 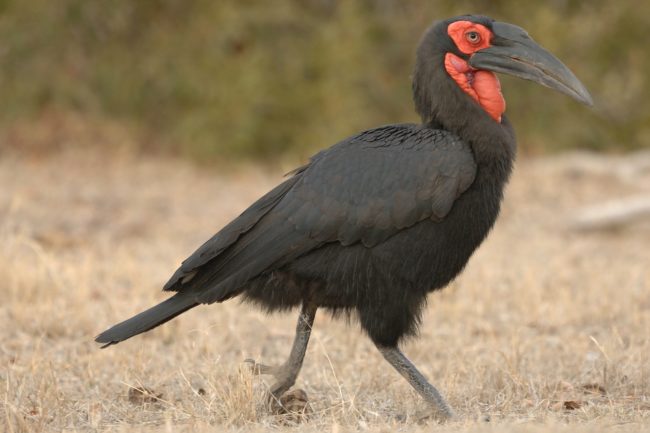 The Southern Ground-Hornbill (Bucorvus leadbeateri) is the largest hornbill species in the world. It belongs to the family Bucorvidae, and it is one of two species within the genus Bucorvis. Another name in the genus, Bucorvus cafer, is a synonym of B. leadbeateri. They are the only hornbill species that does not seal the females in the nest during the breeding season. The Southern Ground-Hornbill is widely distributed, occurring in north Namibia and Angola, to northern South Africa and southern Zimbabwe through to Burundi and Kenya.

How to recognise a southern ground-hornbill

The species is large, weighing about 3.5–4.0 kg and measuring between 90 and 110 cm in height. Adult birds generally have black plumage, which covers the entire body, except 10 primary feathers and their coverts, which are usually white. The Southern Ground-Hornbill has long legs and toes and a broad wingspan; its long tail measures up to 34.5 cm.

Their bill is black with a low casque ridge at its base. Southern Ground-Hornbill adult males have red bare facial skin while females have a patch of dark violet blue on the throat. Juvenile birds display pale grey/cream facial skin and grey sides on the bills and sooty-brown plumage. The adult plumage develops at about three years of age,  and the facial skin will progressively turn pink, orange then red over the three to five-year period. 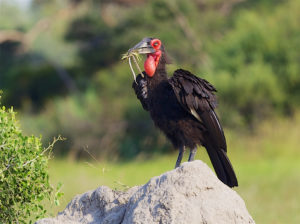 The species is well adapted for the terrestrial lifestyle; they have long stout legs, and they walk on the terminal joints of their short toes. The species moves around the landscape by walking slowly in a group formation. They spend about 70% of their day on the ground, foraging for food. As big is they are, like most birds, ground-hornbill can also fly.

The Southern Ground-hornbill has five different calls. They have a sharp, fast grunt that is usually used when the birds are playing, fighting or when in distress. Also, they have a begging call that is usually used by juvenile birds when they beg for food. Females  also use the begging call during courtship feeding. They have an alarm call that is used to alert the group  when there’s a predator present. Lastly they have a four note booming call, which is used as a territorial and long-range contact call.

The species has a large distribution range, but occurs in small densities across suitable habitats within Angola, Botswana, the Democratic Republic of Congo, Kenya, Malawi, Mozambique, Namibia, South Africa, Swaziland, Tanzania and Zimbabwe. The stronghold population within South Africa is found in the Kruger National Park (KNP). Southern Ground-Hornbill are residents and they occupy territories of about 100–250 km2 per group, depending on habitat quality

They usually occur in grassland, savannah and woodland habitats across the distribution range. The species is absent from arid semi-deserts and extensive forests. 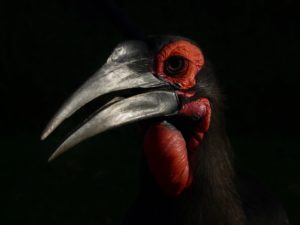 Southern Ground-Hornbill  are omnivorous, and the group often spends most of their time everyday walking long distances, foraging. They have dexterous bills that enable them to dig for food. Generally  Southern Ground-Hornbill will eat anything they can overpower, however, their diet usually consists of invertebrates, reptiles, rodents and amphibians. The bill also helps to prepare slimy food like snails and frogs by rubbing them on the ground.

Small prey items are usually swallowed whole, and big prey items are cut into pieces by shaking them. Hard food items are pecked on repeatedly to soften them. The constituent of their diet is reported to be varying from region to region. A study by Theron (2008) found that the diet  of a group in the KNP was mainly arthropods, particularly termites, beetles and grasshoppers. They also found that Southern Ground-Hornbill  in the KNP feed on toads, snails, lizards and snakes. Birds in Kenya feed on mostly chameleons, and in the Eastern Cape, they feed mainly on earthworms.

Southern Ground-Hornbill exhibit cooperative breeding, living in groups of two to 11 individuals. The group is usually made up of a dominant breeding pair and mostly male helpers that assist the breeding pair in defending the territory, feeding and rearing chicks. Only the dominant male and females copulate. Breeding mostly takes place in natural caverns created in dead or live trees where females spend long periods of time before the egg laying process begins.

Nesting has been recorded to take place in the following tree species, Senegalia,, Adansonia, Brachystegia, Combretum, Diospyros, Ficus, Kigelia, Kirkia, Lannea, and Podocarpus, just to name a few. Southern Ground-Hornbill usually lay one to three eggs, but mostly two. The eggs are laid three to five days apart; by the time the second egg hatches its older sibling will outcompete the latecomer for food, and consequently only one chick is raised past the first  couple of weeks.

Two to three eggs are laid three to five days apart. The older chick will then outcompete the younger chick for food, which results in the younger chick dying of starvation. Consequently only one chick is raised after the first couple of weeks.  Southern Ground-Hornbill are believed to reach maturity at about eight years of age, with an average of one chick fledged every six years. There is approximately 70% juvenile mortality and 1.5% adult turnover. They usually live for 40 to 50 years and the oldest bird recorded was more than 60 years old.

The species live in a cooperative breeding group, with a breeding male and female. The group is usually made up of two to 11 individuals with males helping the breeding pair in defending the territory and rearing the chick. 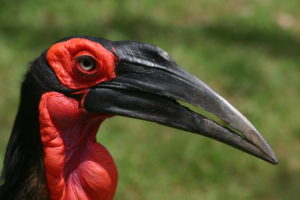 Southern Ground-Hornbill are harmless and long-lived. Threats that the species faces are mostly anthropogenic, including poisoning, habitat loss due to logging where large trees are lost, electrocution and hunting for traditional medicine in some part of the distribution range.  Southern Ground-Hornbill are normally persecuted for their occasional habit of  breaking windows.

In some countries within the species’ distribution range, it is regarded as the bearer of death and the bird is therefore to be avoided and should not be killed. It is often referred to as the thunder bird because it is used traditionally to protect against lightning spells. Also the bird is believed to bring rain during drought season. Predators include martial eagles, leopards and crocodiles. Sometimes chicks can be taken by genets and snakes.

During the mating season, the red pouch on the neck of males inflates. This pouch is used to make booming calls that are heard over long distances. The pouch is used to attract females for mating. The booming sound is usually mistaken for a lion’s roar.

The Southern Ground-Hornbill is an apex predator with very few natural predators. The species usually forms feeding groups with other groups of animals including baboons and impala. Additionally the species is regarded as a flagship species for the savannah biome and it is a valuable indicator for natural and anthropogenic threats within its range.

The species is used in traditional medicine across its distribution range. In some countries the species is regarded as the bearer of bad news, or if it’s seen on someone’s roof it is an indication that someone will die in that house. Also it is believed to be a protector; across its range it is believed to protect against evil spirits, witchcraft and lightning spells.

The species faces multiples threats, and it is a slow-growing species with a low reproduction rate. A Population Habitat Viability Assessment (PHVA) was conduct for South Africa. The population model indicated that the population size of Southern Ground-Hornbill in South Africa will slowly increase if anthropogenic mortalities are excluded. A conservation plan for the species has been drafted for South Africa with priorities clearly identified, the plan aims to ensure that the future of the species is secure.