Skip to content
Home » Animal of the week » Springtails 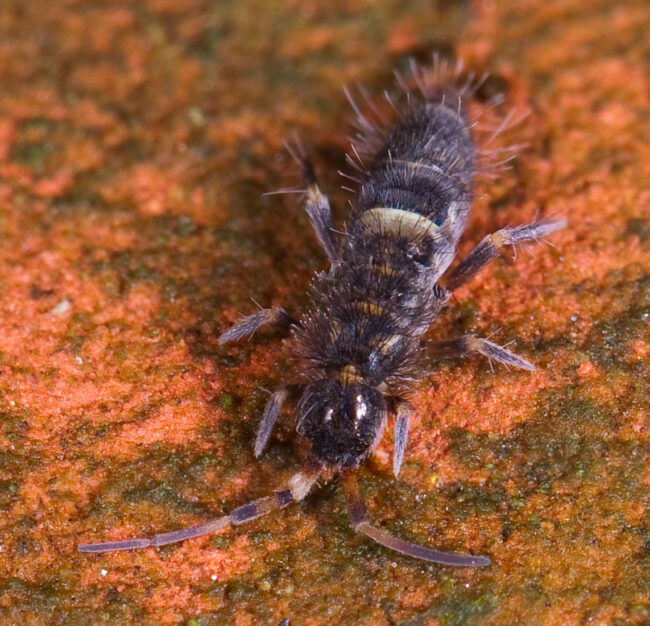 Have you ever wondered what obscure ‘bugs’ you share your garden with? Springtails are one such group of creatures. Springtails are tiny, solitary arthropods that live in and around your home and yard. Springtails aren’t dangerous. They do not bite, transfer diseases, or cause property damage. However, there are a few species that are considered crop pests, such as the lucerne fleas. Springtails, despite their modest size, serve an important role in our daily lives by recycling dead plant debris into nutrients, which may in turn nourish the grass and garden plants.

Description/How to recognize a springtail

Springtails (Collembola) are tiny insect-like creatures. They are one of the world’s tiniest arthropods, measuring up to 0.2 mm in length. The largest springtail you could find is just about 10 mm long. They lack wings and the body is divided into three parts, head (with short antennae), thorax and abdomen. Six legs, short antennae, and a soft elongated or circular body distinguish these tiny organisms. Springtails are creamy white or grey in colour, with some having yellow, orange, metallic green or red scales. Most interestingly, their skin has comb-like hexagonal or rhombic granules that are water repellent and self-cleaning. These are the properties that caught the eye of material scientists.

Springtails got their name from the way they migrate from one location to the next. They have a forked, tail-like device (called the furculum) tucked under their abdomen that allows them to jump several meters into the air. Springtails use this jumping organ mainly to escape predators or to avoid stressful conditions. Typically, this occurs through gaps between brickwork or around doors and windows, and before you know it, tens of thousands of springtails have invaded your home.

Other species of springtails live and move underground. They measure less than 1 mm long and do not have a furculum and are referred to as non-jumping springtails. They are identified by tube-like structure called a ‘collophore’ located on the underside of the first segment of the abdomen.

Antennae, which are long organs on the head of springtails, are used to manoeuvre and communicate with other springtails in the environment. They use their antennae to touch and assess the surfaces in front of them by moving the organ around. Springtails, like insects and many other arthropods, use pheromones to communicate with each another, allowing them to signal danger or congregate in areas that are conducive to feeding, mating, moulting and oviposition. Olfaction is also utilised to help springtails choose their favourite foods.

Springtails are found all over the world. With over 650 different species, they occur on every continent, even in the most inhospitable environments such as Antarctica and the Namib desert. Springtails inhabit both terrestrial and aquatic environments. Factors such as soil temperature, moisture content, pH, the lack of a leaf litter layer, and fungus community features may also influence their distribution. They are abundant indoors in damp places like restrooms and basements. 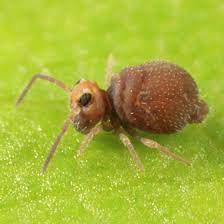 Vegetation type has an impact on habitat selection and dispersion, especially in harsh situations. Springtails flourish in urban environments where they may locate wetness or dampness. They are also found in green places, nurseries, gardens and even golf courses and under mulch in flowerbeds. Swimming pools and pool homes are also common habitats. They can also be found hiding in landscape timbers, water meter boxes, and even dog kennels. Springtails become dehydrated and die if their habitat becomes too dry. As a result, when the weather becomes hot and dry, springtails will want to relocate indoors or underground. They sneak in through cracks in doors, screens and crawlspaces. Once they’ve made it inside, springtails look for moist areas. Springtail sightings are more likely during rainfall and heavy humidity.

Organic materials are the main source of food for springtails. Algae, fungi and decaying materials, which ranges from rotting vegetables to animal remains, are all common components of the springtail diet. Some species eat living plants, fungal spores and pollen. They rarely harm plants and occasionally feed on young shoots.

The local climate and current weather conditions have a big impact on springtail reproduction. Springtails can proliferate at high rates during wet the season. They frequently move to areas with more moisture as their habitats dry out. Female springtails pick up spermatophores dropped on a substrate by male springtails and fertilise them before laying eggs alone or in groups. The lifespan of a typical springtail is three to five weeks after hatching, depending on the viability of the surrounding environment.

Springtails are mostly known for living in large groups and reproduce rapidly.

Springtails often have to escape predators such as soil-dwelling mites and venomous spiders, which are common predators of these small arthropods.

The most characteristic feature of the springtail is the jumping organ or furca. This structure is used to evade predators but has limited dispersal capabilities. The cuticle of Collembola is composed of triangular granules that render it water-repellent and enable them to float on water. This cuticle with an unusual skin pattern allows the springtail to resist getting wet at elevated pressures and getting wet by many organic liquids. 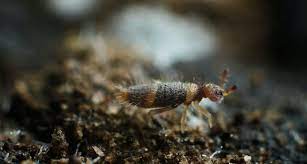 Springtails are cryptozoa (small animals that live in darkness and under conditions of high relative humidity) that are commonly found in leaf litter and other decaying materials, where they are predominantly detritivores (feed on decaying plants or animals) and microbivores (feed on microbes, especially bacteria). They are one of the most important biological agents for controlling and disseminating soil microorganisms.

Springtails do not have the ability to infest humans, contrary to popular belief. This is a common urban legend that may be discovered on the internet. Many springtails on the other hand, perform a crucial function in the environment, notably in our gardens by decomposing and recycling dead plant matter. They’re most common in the garden, hiding behind stones or in compost. Springtails are overall good bioindicators of environmental changes.

Springtails are currently abundant in the environment making them a Least Concerned species with regards to the IUCN threat status.

Collembola are genetically related to other hexapods, the majority of which are insects. They are classified into four orders; namely Entomobryomorpha (4 000 known species), Poduromorpha (3 300 species), Symphypleona (1 200 species) and Neelipleona (50 species). A recent study based on the Cape Floristic Region of South Africa found a more diverse springtail fauna than previously known (136 identifiable species and an estimated 300 species for the Cape Floristic Region in total), including radiations in genera like the isotomid Cryptopygus.