Skip to content
Home » Animal of the week » Square-lipped rhinoceros 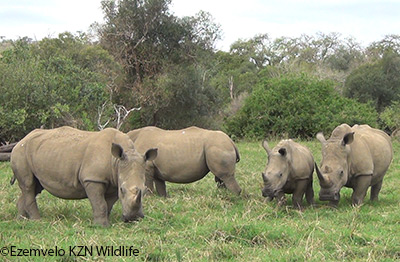 Square-lipped rhinoceros (usually shortened to rhino) is the largest extant (living) species of rhinoceros. They are not the largest rhino species that ever lived, however. This distinction belongs to the extinct Paraceratotherium, which was one of the largest terrestrial mammals ever, weighing an estimated 15 to 20 tonnes, and standing about 4.8 m high at the shoulders.

The square-lipped rhino has a wide mouth used for grazing and is the most social of the rhino species. There are two subspecies: southern white rhino (C. simum simum), with an estimated 20 405 wild living animals in 2013, and the much rarer northern white rhino (C. simum cottoni). The northern subspecies has very few remaining, with only four confirmed individuals left (three females and one male) all in captivity (a fourth female died at the age of 31 years at an eastern European zoo in 2015).

How to recognise a square-lipped rhino

The square-lipped rhino is 3.6–5.0 m in length, and they stand about 1.6–2.0 m tall at the shoulder. They usually weigh between 2 300 and 3 600 kilograms. Coloration is pale yellowish-brown to slaty grey. It is naked except for ear fringe and a tail bristles. Hairs are present in the skin, but do not protrude. The front horn averages about 60 cm in length, but can be more than 150 cm long.

External features distinguishing Ceratotherium from Diceros (black or hooked-lipped rhino) are a square upper lip with no trace of a proboscis, compared to the triangular hook-lip of the black rhino; elongated and pointed ear conchae with a few bristly hairs at the tips, compared to rounded conchae with hairy edges in the black rhino; a more sloping back (higher at the shoulders, lower at the hips), while the black rhino has a dip in the back (with shoulders and hips at almost the level); and less conspicuous skin folds on the body.

Rhinos have three toes on each foot that allows them to keep their balance while walking around. Their gait is usually slow and measured while they graze, but they can reach speeds of up 80 km/hr in short bursts – usually when they suddenly charge at an unfamiliar smell or sound.

In Uganda, the square-lipped rhino enters swampy country in the dry season, but when the rain comes, they move for about 10 km or more inland from the Nile, especially to an area known as the Bibba ridge.

They communicate by making vocal sounds. The bull is more vocal than the cow and makes noises that include snorts, bellows and loud cries like an elephant’s trumpet.

The southern subspecies (C. simum simum) – the majority of white rhino – live in southern Africa. About 98.8% of white rhino occur in just four countries (South Africa, Namibia, Zimbabwe  and Kenya). Almost at the edge of extinction in the early 20th century, the southern subspecies has made a tremendous comeback. In 2001 it was estimated that there were 11 670 white rhinos in the wild with a further 777 in captivity worldwide, making it the most common rhino in the world. By the end of 2007 wild-living southern white rhino had increased to an estimated 17 480 animals (according to IUCN 2008).

The northern subspecies (C. simum cottonii) ranges from northwestern Uganda, southern Chad and southwestern Sudan to the eastern parts of Central African Republic and northeastern Democratic Republic of Congo. The last surviving population of wild northern white rhinos are located in Garamba National Park in the DRC but in August 2005, ground and aerial surveys conducted under the direction of the African Parks Foundation and the African Rhino Specialist Group (ARSG) have only found four animals: a solitary adult male and a group of one adult male and two adult females.

Square-lipped rhinos are herbivorous grazers that eat grass, preferring the shortest grains. They drink twice a day if water is available, but if conditions are dry they can live four or five days without water. Square-lipped rhinos spend about half of the day eating, one third resting, and the rest of the day doing various other things. They are active in the morning and in the evening; other hours are spent wallowing or resting, especially on warm, windless days.

However, they may be actively feeding at all hours. During rest periods, they lie in the shade of a tree or termite hill. Ceratotherium differs from other rhinos in that they are pure grazers who live entirely on grasses – no browsing on tree leaves like hooked-lipped rhino.

Mating is year round, but most common from July to September in Zululand, males fight fiercely and bloodily for females, charging each other head-on and death may often occur as a result of these encounters. Several males follow a female in oestrus and one finally succeed by chasing others away and then mating with the female. In Zululand, oestrous females form consort pairs with territorial bulls, which may last for 2 to 3 weeks.

The gestation period is estimated to be between 480 to 550 days. The new-born calf weighs about 50 kg and remains shaky for 2–3 days. Weaning commences at 2 months of age, but nursing may continue until well over 1 year. The older calf is driven off at the birth of a new calf. Females have their first calf at age 61/2 to 7 years, but males reach maturity at probably over 12 years of age before he can claim a territory and mate. A wild, 36-year-old female can still be reproductively active.

Square-lipped rhinos are predominantly grazers and have been shown to act as ecosystem engineers. Further understanding of their role in shaping landscape and how they support a range of biodiversity across different groups can reinforce their ecosystem value to help support efforts to conserve these species. Rhinos are one of the ‘big five’ animals popular on African safaris and they are a popular tourism draw in places like the Kruger National Park.

In almost all rhino conservation areas, there are other valuable plants and animals. The protection of rhinos helps protect other species including elephants, buffalo etc. Rhinos contribute to economic growth and sustainable development through the tourism industry, which creates job opportunities and provides tangible benefits to local communities living alongside rhinos.

White rhinos consume about 12 to 16 kg of vegetation a day. To meet the demand of their diet, they live in densely vegetated grasslands, savannahs and tropical forests of Africa. They spend most of the day traveling a few kilometres daily, eating a wide-variety of grasses to meet their dietary needs. To deal with hot weather, they tend to rest during the heat of the day and forage for food in the morning and evenings. They drink large amounts of water to hydrate themselves and cool off their bodies. They prefer to drink daily, but can go several days without water when necessary. During dry seasons, they often travel farther than normal to find water, extending their territories to 20 km2.

Square-lipped rhinos are said to be a driving factor in the ecosystem. However, the destruction of these mega herbivores could have serious cascading effects on the ecosystem and harm other animals.

The northern subspecies, C. simum cottoni, has been greatly reduced in numbers through indiscriminate hunting for the horns, which are considered by some east Asian cultures to have aphrodisiac properties. Despite the lack of scientific evidence, the rhino horn is highly prized in traditional Asian medicine, where it is ground into a fine powder or manufactured into tablets to be used as a treatment for a variety of illnesses such as nosebleeds, strokes, convolutions and fevers. Due to this demand, several highly organised and very profitable international poaching syndicates have come into being and carry out their poaching missions using advanced technologies ranging from night vision scope, silenced weapons, darting equipment and even helicopters.

Southern square-lipped rhinos are a spectacular conservation success story, but the current poaching crisis could reverse all of the conservation gains. They are particularly vulnerable to hunting. Because it is a large and relatively unaggressive animal and generally occurs in herds, square-lipped rhino has now received a Near Threatened status as its total population tops out at 20 000 members.

The rhinoceros originated in the Eocene Era about fifty million years ago alongside other ungulates (hooved animals). Ancestors of the black and white rhinoceros were present in Africa by the end of the late Miocene Era about ten million years ago. The two species evolved from the common ancestral species Ceratotherium neumayri at the time. Between four and five million years ago, hooked-lipped rhino diverged from the square-lipped rhino. After this split, the direct ancestor of Diceros bicomis, namely Diceros praecox, was present in the Pliocene Era in East Africa (Ethiopia, Kenya and Tanzania). D. bicomis evolved from this species during late Pliocene era–early Pleistocene Era.