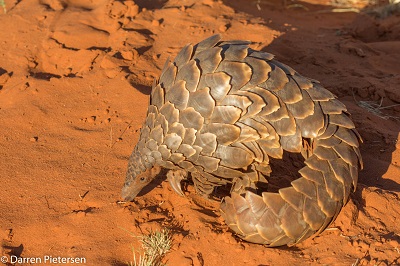 The Temminck’s pangolin is a secretive, primarily nocturnal, mammal that is covered in overlapping plate-like scales, which provides protection from predators. When under threat the Temminck’s ground pangolin rolls into a ball with the soft underbelly covered by a muscular tail. The word pangolin comes from the Malay word “pengguling” meaning something that rolls up. Owing to its secretive nature and low densities, little is known about the pangolin. In spite of this the species is widely used for traditional medicine and it is hunted for bushmeat.

How to recognise ground pangolin:

Temminck’s ground pangolin is one of the four African species, there are 4 other Asian species. Amongst the 8 pangolin species there are differences but they look very similar. Pangolins have no teeth. It is a medium-sized mammal with an elongated, streamlined body that is adapted to feeding on termites and ants. They have a small cone shaped head.

The body is covered by large yellow-brown overlapping scales, which are made up of joined hairs that cover the dorsal and lateral surface both sides of the tail and the outer surface of the legs. They have strong forelimbs that are armed with strong, big and sharp claws. These claws are used to tear apart ant and termite nests. They have a strong prehensile and very vascular tail.

The Temminck’s ground pangolin is a terrestrial animal that walks with all four limbs (quadrupedal). When walking, the front claws that are used for digging, are curled under and the animal walks on its knuckles or wrists. They walk slowly and they are also capable of bipedal walking. While walking their head sways from side to side and their tail drags along the ground. They are also good swimmers and good climbers.

Communication between individuals is poorly understood, however, their sense of smell, taste and hearing are better developed than their ability to see.

Temminck’s ground pangolin occurs throughout most of southern and eastern Africa, with the range extending from the Cape in the south towards Chad in the north and most of Sudan. It does not occur in Saharan and Western Africa.

The Temmick’s pangolin lives in arid and mesic savanna and woodland with annual rainfall of 250-1,400 mm. They are absent from forest, high rainfall areas, where their relative, the giant ground pangolin (Smutsia gigantea) occurs, and true deserts. In South Africa we have only one pangolin species the Temminck’s ground pangolin. It occurs in bushveld areas in the former Transvaal, Natal and the Cape Province.

In Namibia it occurs in thorn bush savanna, tree savanna, woodlands, highveld savanna, camelthorn savanna, mopane savanna, and mountain savanna. They live in burrows that are dug by ant bears, spring hares or aardvarks. Temminck’s ground pangolin home ranges have been estimated to be roughly 5.6 – 11 km2 for older males and the older individuals of both sexes having larger home ranges than females and younger individuals. Pangolins seem to occur at low densities.

Pangolins feed exclusively on ants and termites. They are very selective normally feeding on only one or two ant species. They do not dig for prey like other pangolin species but they search through surface detritus and explore cracks in the soil.

African ground pangolins are solitary, but males and females come together during the mating season. Mating and the mating season are not well documented however it is suggested that mating takes place late summer to early autumn. Males are generally large than females, and can weight up to 50% more than the females.

Gestation period is 139 days, however, mating season and birthing was never documented. Temminck’s pangolins give birth to one offspring, while the Asiatic species may give birth to one to three one offspring. At the time of birth the scales of the juvenile are soft and white. After several days they harden and become dark to resemble that of the adult pangolin. The mother will stay with the offspring in her burrow for several days, where she will wrap her body around it if there’s danger.

The young is weaned at approximately 3 months of age, this is a stage where the young start eating insects. Pangolins reach sexual maturity at 2 years where they are abandoned by the mother. Breeding is not well documented but it is believed that they breed annually. There is currently a lack of on the longevity of pangolins, but, they are generally believed to live about 20 years or more in the wild and have been recorded to live up to 27 years in captivity.

Pangolins are solitary species, males and females come together only for mating. They give birth to 1 offspring sometimes 2 to 3. The offspring lives with the mother until it is sexually matured at 2 years.

Temminck’s ground pangolin is preyed upon by leopards and hyenas. However, humans illegally collect pangolins from the wild for the bushmeat trade, and for the traditional medicine market locally and internationally. In South Africa, electric fences have been identified as a major threat to the. According to research at least one pangolin is killed per 11 km of electrified fence annually. Another foe for the pangolin is habitat destruction, 3 pangolin species that are found in West Africa where it is estimated that 80% of original forest have been converted to agricultural land.

Pangolins have highly developed olfactory organs and they rely on their sense of smell to forage. When under threat they roll up into a ball, this protects them from predators because they expose their hard scales and protect their face and soft under belly.

Pangolins feed on ants and termites and they consume large quantities. They thus help to control population of these arthropods. It is estimated that an adult can consume about 70 million insects annually and approximately 20,000 ants per meal.

In Zimbabwe, it is a good omen to see a pangolin it is a tradition to catch them and present them to the superiors. As a result people often capture pangolins and give them to the local chief to eat, or the rain maker and even the spirit medium. Moreover, in eastern African countries they believe burning pangolin scales keeps lions away. The scales are used in the traditional medicine both locally and internationally.

According to the recent IUCN Red List assessments, all four Pangolin species are declining and are listed as Vulnerable. Temminck’s ground pangolin has been concluded to be going though past/ongoing and projected future population reduction of 30 – 40 % over a 27 years period.

Did you know that South Africa is co-proposing the up listing of Temminck’s ground pangolin and  three other pangolin species from CITES Appendix II to Appendix I at the Conference of the parties (CoP 17) hosted by South Africa in September 2016.