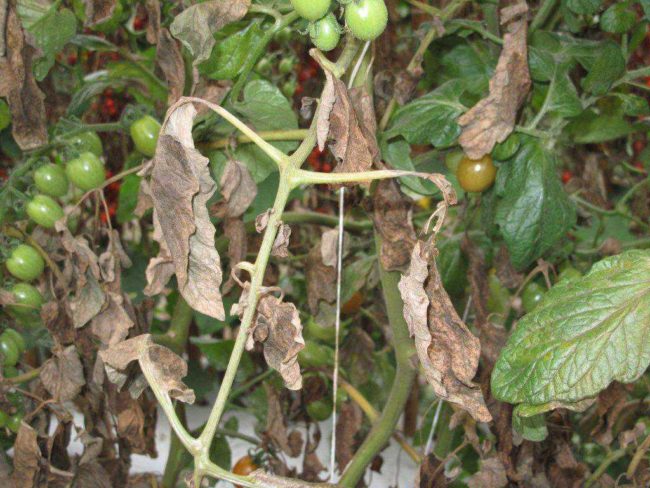 Aculops lycopersici, commonly known as tomato russet mites, are so small that they are invisible to the unassisted eye and their presence can usually only be determined by symptoms observed on the plant. When observed under a  microscope, they appear orange to yellow in color and have a shape that become narrower towards one end (Smith-Meyer 1981).

Some common symptoms may include presence of heavily yellowish-brown coloured stems or branches or dried leaflets, the discolouration of flowers, flowers that fail to open, premature drop of the fruits, enlarge buds, premature bud drop and abnormalities in shape of the leaves (Smith-Meyer & Craemer 1999). The Eriophyid mites can be identified with certainty only by examining properly cleared and slide-mounted specimens under high magnification (Smith-Meyer 1981). 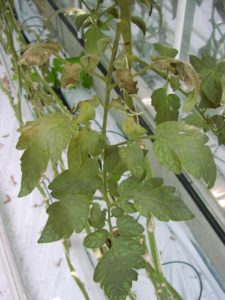 The tomato russet mite can be found all over the world in large numbers in almost all areas where solanaceous crops are grown. The exception is in southern and northern latitudes below and above 60 degrees, respectively (Duso et al. 2010).

This mite attack and lives on solanaceous crops in a warm and dry habitats and dies when it gets too cold since it cannot sustain normal physiological functions. They enter a deep sleep to withstand the unfavourable  temperatures unless it can get a perennial alternate host on which they can  overwinter (Smith 2015). They first inhabit the lower part of the plants before slowly moving up the plant as they damage the lower parts of the plant through feeding (Park et al. 2010).

Aculops lycopersici feed on the foliage, inflorescence and young fruits of tomato plant, causing shriveling and death of leaves, dropping of flowers, and russeting of fruit (CABI 2020). The tomato rust mite may feed on other plant species such as brinjal, peppers, potato, wild and Cape gooseberry and many other solanaceous plants (Smith-Meyer & Creamer 1999). Injury to these host plants is only frequently observed on tomatoes and rarely on other Solanaceous species (Kawai & Haque 2004).

Sex and life cycles
Sex: Tomato russet mites go through  a few generations per growing season and its population can double in a few days at high temperatures and they die if exposed to sub-freezing temperatures (Duso et al. 2010). Females lay over 53 eggs in their lifetime and newly hatched females begin laying eggs just after two days.

Family life: They usually live in large numbers on a green surface just ahead of the damaged area and exhibits a patchy distribution in the host field (Duso et al. 2010). They work together when migrating from a dying plant to the alternative plant host (Smith-Meyer 1981).

Several species are thought to be natural enemies of A. lycopersici. Homeopronematus ancona (Tydeidae) and Amblyseius swirskii (Phytoseiidae) are predatory species of mites that prey on and decrease the population of tomato russet mite when both occupy one plant (Kawai & Haque 2004).

Aculops lycopersici uses the perennial host  to survive unfavourable winter conditions. The success of this species is seen in its reproduction strategy of giving rise to a succession of generations that can develop from egg to adult in as little as a week (CABI 2020).

This species also have a strategy of first inhabiting the lower parts of the plant before they move to the upper parts of the plant where they can be easily dislodged  by a gust of wind; where their small size make it easy to escape the dying plant quickly. It is this strategy of how they attack the host plant and their movement on the plant ensures the survival of the species (Park et al. 2010). 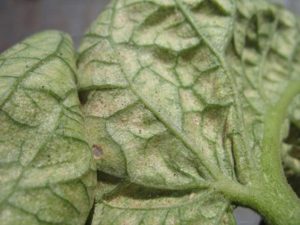 This mite species is regarded as an important pest of tomatoes and can easily kill the plants (Smith-Meyer 1981).

The species is regarded as a serious pest to solanaceous plants and has no conservation  status.

The species of A. lycopersici resemble members of other species of Acolups (CABI 2020). In South Africa, 25 eriophyid species, including tomato russet mite, have been recorded. The host plants differs with individual species of the eriophyid, and the symptoms that they produce on different plants hosts range from leaves discolorations, unusual shape of the leaves to deformation of fruits (Smith-Meyer & Craemer 1999).