Skip to content
Home » Animal of the week » Water mongoose 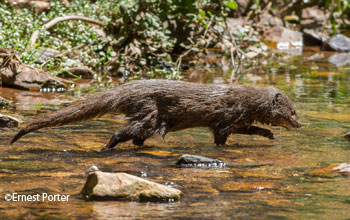 The water mongoose is the only member of the genus Alitax, which is included in the mongoose family Herpestidae. It is a large and robust mongoose species that occurs throughout sub-Saharan Africa and is common in areas adjacent to rivers, streams and dams. The water mongoose is a solitary and nocturnal species that feeds on aquatic prey such as crabs, prawns, fish and frogs. It is well adapted to living in semi-aquatic habitats and has features such as strong, non-retractable claws that are well suited for digging and grabbing food and feet that have no webbing between the digits which, when walking, tend to spread out, helping them to walk on muddy surfaces. They also have a well-developed sense of smell to find and locate potential food sources. The water mongoose is generally widespread and common in its natural range and no conservation actions are recommended.

How to recognise a water mongoose

The water mongoose is a large and robust mongoose with an overall length of 0.8-1.0 m and a weight of between 2.5 and 4.2 kg. Body colour varies from almost black to rusty brown, but it is usually dark brown.

The water mongoose has an overall shaggy/grizzled appearance from the guard coat hairs that are annulated or striped. The under fur is soft and woolly, with the colour varying from dark greyish-brown to black.

The hair in front of the ears grows very long and thick and completely covers the external ear when the mongoose is swimming, protecting the ear from getting water in it. The tail is short, with a length of 300–410 mm.

The fore and hind feet are pre-adapted to walking on wet and muddy substrates. The feet have five digits with no inter-digit webbing (in contrast to other mongoose species) and, when walking, the digits tend to spread out, which facilitates walking on muddy substrates.

Water mongooses are widely distributed and common in sub-Saharan Africa except in the dry regions of Namibia, Botswana, Zimbabwe and South Africa. They occur as far south as South Africa, throughout central Africa up to Ethiopia, and western Africa as far as Senegal. In South Africa they occur in Limpopo, Gauteng, Mpumalanga, KwaZulu-Natal and Free State. In the Northern, Eastern and Western Cape the water mongoose occurs in areas with rivers and permanent water bodies such as vleis and dams, but is absent in drier parts.

Water mongooses are mainly associated with rivers, streams, marshes, swamps, dams and estuaries. They may, however, move some distance away from water in search of food. The resting sites often include rocky areas in streams or near dams.

The water mongoose mainly eats aquatic prey such as crabs, prawns, fish and frogs. They are also known to take terrestrial prey such as mammals, birds, insects, reptiles as well as plant material. They are able to open mussels and crabs by hurling them down against a rock from a standing position.

Water mongooses are seasonal breeders and litters of two to three young are born in early spring to mid-summer (August to December). The gestation period varies from 69 to 80 days. The pups are born fully furred and the males grow slightly faster than the females. The eyes open at 11 days. The young start to take food after about a month. In captivity the water mongoose is known to live for up to 17 years.

They are solitary, nocturnal and only seek out mates during the breeding season. The mother cares for the young and interactions such as play and mutual grooming have been observed between the mother and young.

Water mongooses are preyed on by eagles and other large birds-of-prey, jackals and snakes.

It is able to stand bipedally on its hind legs to scan its surroundings. The brain is large and associated with increased touch sensitivity and muscular control of the forepaws; characteristics that enable it to locate and eat crabs and other relatively hard-bodied prey. It is rumoured to swim almost as well as otters, by undulating movements of its body, despite the absence of webbing between the toes and the fact that the under-fur becomes waterlogged.

The water mongoose is fairly common and populations are stable in their natural habitat. It is therefore not listed in the South African Red Data Book or any CITES Appendices. There are no major threats, although the water mongoose may be vulnerable to habitat-modification and -loss through pollution and siltation.