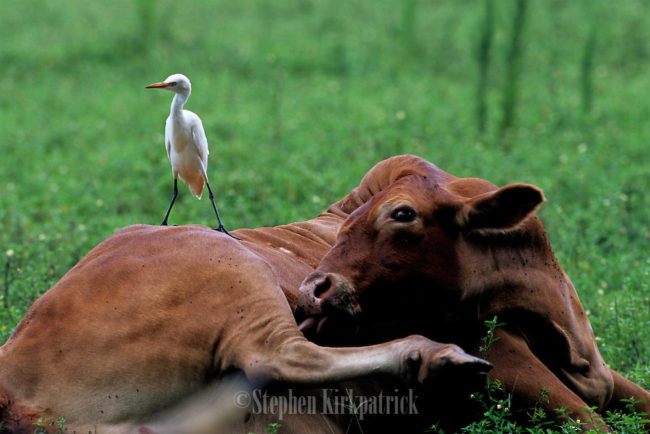 The Western Cattle Egret was first described by Linnaeus in 1758 as Ardea ibis, and was later moved to the genus Bubulcus in 1855 by Charles Lucien Bonaparte. The genus name (Bubulcus) is Latin for herdsman, referring to the species’ association with cattle. The species name (Ibis) is a Latin and Greek word that originally referred to another white wading bird, the sacred ibis, but was applied to this species in error (Jobling 2010; Chittenden et al. 2016).

The species is strongly associated with cattle as it is often spotted with or around cattle. It also associates with other, wild, herds of herbivore such as buffalo, blue and black wildebeest, and impala. It is for that reason that many of the listed common names make reference to the bird heading cattle.

Western Cattle Egrets are the smallest of the white egrets; they are medium sized heron-like birds, about 46 to 56 cm long with a wingspan of about 88 to96 cm.  The average weight of the adult bird is about 360 g, and males and females are about the same size (Scott 1987). They have a thick neck and a long sharp bill, which is black in juveniles and yellow in adults. The non-breeding adults have greyish-yellow legs; during breeding season however, the legs become bright red.

Although darker in males, both the male and female grow orange breeding plumage during breading season, and show aggressive defensive behavior by erecting their crest. Males defends their territory until they find mates, once paired, both male and female defend the nesting territory together (Weber 1972; Kaufman 1996).

The birds walk in a swaying manner, similar to that of a goose and when in flight, their necks are tucked in closely to their bodies or held in an S-shape. Their necks are hardly ever extended even when resting.

These birds are usually quiet, especially when they are alone. They do not have any characteristic calls for flocking or flying, but generally give a “aaaaaaark or pok pok” call, however they render a rick–rack simple call when breeding in colonies. Although they don’t often vocalize outside of the nesting colony they do give a quiet, throaty rick-rack call.

The Western Cattle Egret has undergone one of the most rapid and wide reaching natural expansions of any bird species. It is a true cosmopolitan bird and can be found in the warm temperate zone, tropics and the subtropics (Del Hoyo et al. 1992). It is distributed to all parts of the world; in the western hemisphere, their breeding ground spans from Canada and the United States, southwards through the West Indies to South America.

They are also found India, China, Japan, the Ryukyu Islands in Southeast Asia and throughout the Philippines and East Indies towards Australia and New Guinea. The species is also recorded in southern Africa. In South Africa, it is recorded from all nine provinces, but appear to have less preference for the Nama Karoo and Succulent Karoo biomes (Chittenden et al. 2016).

The species is recorded from open grasslands, wetlands, including sewage ponds and waste dumps, and also in agro-ecosystems. Their sightings are strongly linked with cattle and other big life stock.

During feeding, the Western Cattle Egret position their eyes for binocular vision, so as to catch feeds (insects) as they spring off the vegetation, following disturbance by cattle or other life stock, and also tractors in farmlands.

The Western Cattle Egret is a monogamous species and usually starts breeding at about two to three years of age (Kaufman 1996). They nest in colonies, before mating, however, males must first claim their territories. The male will then perform elaborate courtship rituals, including picking up and shaking twigs. A female then chooses a suitable mate and suppresses his displaying by landing on his back. After the pair has bonded, the female follows the male to another location where copulation takes place and where the nest will be built (Kushlan & Hancock 2005).

The nests are usually built on trees, swamp, shrubs or bushes. Pairs build a nest together, often stealing twigs from neighbours. The female lays three to four eggs, which both parents incubate for approximately 24 to 25 days. Throughout this period, when one bird leaves the nest, upon its return, it is greeted by a ceremony that involves erecting its plumes and/or flattening its chest feathers. The chicks fledge at one month of age.

The Western Cattle Egret is a very sociable bird, which tends to settle in large colonies often with other species of birds. Some populations of Western Cattle Egrets migrate while others are described as just dispersive and differentiating between the two is a challenge for this species (Telfair 2006).

The adult Western Cattle Egret has only a few predators, but other birds and mammals may raid its nests, where chicks may be lost to starvation, calcium deficiency or disturbance from other large birds. They have a high association with grazing animals, especially cattle, and can be seen hanging around them and following the herd while it grazes.

The Western Cattle Egret has the capacity to adapt, naturalize, and even invade new areas in different regions of the world (Subramanya 1996). The species is able to thrive in completely trashed habits including municipal solid waste dumps, which would be covered with a variety of prey ranging from maggots to insects and smaller birds  (Seedikkoya et al. 2007).

The birds have often been spotted heading towards smoke, which might indicate a fire that insects will likely be trying to escape, where the egrets will capitalize on the evacuation and capture the fleeing bugs. They also hang around airports and wait for aeroplane landings or take-offs, as this disturbs the insects in the nearby vegetation providing an opportunity to capture the insects.

Without predation, maggots metamorphosizes to house flies, which are known vectors of a number of human pathogens causing diseases such as dysentery, typhoid and cholera. The Cattle egrets act as an important bio-control agent in this regard.

Although the behavioral pattern is not reported in South Africa, the Masai people of Kenya consider the presence of large numbers of Western Cattle Egrets as an indicator of impending drought and use it to decide on moving their cattle herds to other grazing sites (Tidemann & Gosler 2010).

The Western Cattle Egretis considered friends of the farmer, and is very popular with cattle ranchers. This is because they remove ticks and flies from animals and also follow tractors and feed on invertebrates, some of which could potentially feed on seedlings or crops.

This species has a large distribution range, with an estimated global Extent Of Occurrence (EOO) of 10,000,000 km2. Its global population is estimated to be 3.8–6.7 million individuals. For these reasons, the species is listed as Least Concern.

The Western Cattle Egretis the only member of the monotypic genus Bubulcus, although some authorities regard two of its subspecies, the Western Cattle Egret  and the Eastern Cattle Egret, as full species. Despite the superficial similarities to the egrets of the genus Egretta, the Cattle egret is more closely related to the herons of the genus Ardea, which comprises of the great or typical herons and the Great Egret, rather than to the majority of species termed egrets in the genus Egretta (Sheldon 1987). Rare cases of hybridization with Little Blue Herons, Little Egrets and Snowy Egrets  have been recorded (McCarthy & Eugene 2006).