Skip to content
Home » Animal of the week » White-winged tern 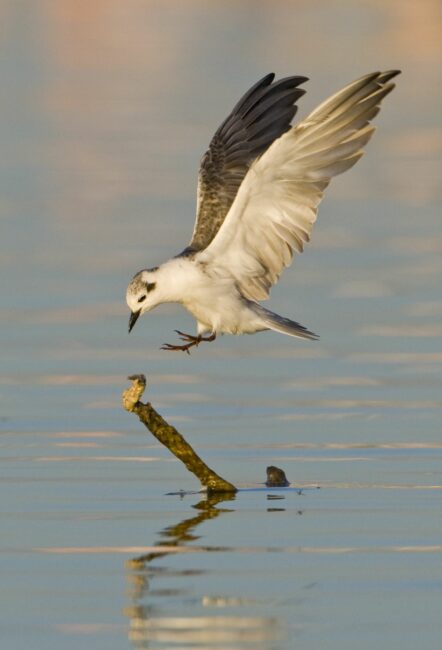 A White-winged Tern is a small gull-like bird around 23–27 cm in length, with a wingspan of 63–67 cm and weighs around 54–66 g. Summer breeding adults are characterised by a black head, neck and belly that is contrasted by a white rump. The upper parts of wings, as the name implies, are mostly white, while the black underwing coverts are diagnostic for breeding adults of the species. The bill/beak is reddish-black and the feet are red. In non-breeding adults and the similar-looking juveniles, most of the black feathers are replaced by white and greyish-brown patches, including ‘earmuff’ patches on the head. The coloration of non-breeding adults is sometimes confused with other terns, with upper parts pale grey and a white head and underparts. They may retain some black underwing coverts in winter.

The White-winged Tern flies about with wing beats that can be best be described as shallow and leisurely. When hunting they can be seen flying slowly above the water to catch insects in flight or dipping down to catch prey on the water’s surface. They may also be seen on occasion dipping slightly below the surface.

White-winged Terns have an extremely large distribution range encompassing the Afrotropical, Indomalayan, Nearctic, Neotropical, Oceanic and Palearctic realms. Breeding populations can be found from China to central Europe. Non-breeding populations are found in southeast Asia, northern Australia and most of sub-Saharan Africa. The southern African distribution includes southern Mozambique, Zimbabwe, northern and southeastern Botswana, central and northern Namibia and central and southwestern South Africa. They are extant (native, non-breeding) to South Africa, where they occur in the central and southwestern parts of the country.

The bird’s diet mainly consists of invertebrates and small fish, but they also feeds on crabs, shrimp and other aquatic animals. When feeding on flying insects, they forage in flocks and use the wind to carry them upwards to catch their prey. When feeding on aquatic prey, they perform an arial attack, plunging down to the water’s surface to seize its prey. Prey are taken to a secluded area to be killed and eaten. They are also opportunistic and will eat fish discarded by fishing boats.

SEX and LIFE CYCLES
Sex: The breeding season occurs between April and August (spring to summer), but predominantly in June. They usually lay three eggs, which are incubated for 20 days, and the hatchlings fledge after 24 days. The nesting site consists of a shallow cup in a mound of aquatic vegetation placed over water on floating mats of vegetation, or on dry shores or resting on the bottom in shallow water.

Family life: This bird is usually seen in small family groups or in large flocks. They may either nest in single- or mixed-species colonies.

They have been recorded to be preyed on by Falco peregrinus (Peregrine Falcon).

Birds of the Laridae family play an important role in aquatic ecosystems.

There has been one recorded case by Airports Company of South Africa (ACSA)’s bird strike avoidance service in collaboration with SANBI’s Genetic Services Unit’s DNA barcoding or ‘bird strike service’, of a White-winged Tern being involved in a collision with a Mango aeroplane on landing.

The current population is stable, but they are threatened by habitat destruction and drainage of wetlands in Europe. However, due to large population size and extensive range they are not considered under threat. The IUCN Red List global assessment lists them as Least Concern.