Skip to content
Home » Animal of the week » Yellow mongoose 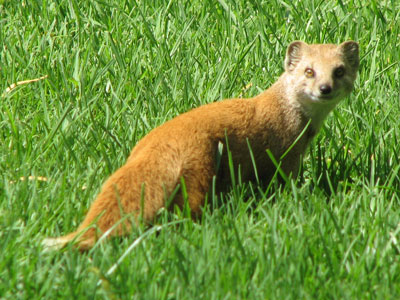 Members of the genus Cynictis are often referred to as ‘mierkat’, which is an Afrikaans word meaning ‘termite mongoose’ because of their association with termite mounds for shelter and termites as a food source. The common name ‘yellow mongoose’ refers to the yellow colour of the coat, although the coat colour varies from yellow to grey among subspecies that occur in southern Africa.

The yellow mongoose is the only member of the genus Cynictis, but as many as 12 sub-species have been described based on variations in colour, size and the length of the hair and tail. Taxonomic status of these subspecies is, however, unclear, with several authors reporting equivocal taxonomic revisions. Skinner & Chimimba (2005) listed four subspecies after Taylor (1990) and these are C. p. penicillata, C. p. bradfieldi, C. p. coombsii and C. p. natalensis, and for the purposes of this assessment this taxonomy is adopted.

The four sub-species are known to occur in southern Africa in Namibia, Botswana, South Africa and Lesotho. The yellow mongoose is solitary or occurs in pairs and they live in burrow systems in open, semi-arid areas. They are well adapted to living in subterranean habitats and have strong claws that are well suited for digging and grabbing food. The yellow mongoose is relatively widespread and common in its natural range with no major threats and therefore no conservation actions are recommended.

How to recognise a yellow mongoose

There is wide variation in descriptive characteristics among the four subspecies of yellow mongoose across its distribution range. In general, subspecies from the southern parts of the distribution range are larger in size, have longer yellow or reddish fur and have a longer tail that has a white tip. The northern subspecies are smaller, have shorter tails with no white tip and they have shorter greyish hair. The head is large and pointed with relatively large ears that project above the line of the head. Both sexes are alike in size and have the same appearance.

Yellow mongooses have five digits on the forefeet and four digits on the hind feet. The front feet have long curved claws that are used for digging. They are predominantly diurnal, being active during daylight and retreating to burrows at night and in extreme weather.

The yellow mongoose inhabits open, semi-arid areas such as grasslands and scrub lands where they live in burrows. They are rarely found in deserts, forests or mountainous regions.

Yellow mongooses are opportunistic feeders and insects form the bulk of their diet, but they will also readily feed on amphibians, rodents and reptiles, including snakes and lizards. Yellow mongooses also eat carrion. The yellow mongoose is unique among mongooses in that it is the only known species that brings large prey items (e.g. rodents, bats or reptiles) to its young while they are still in the burrow.

Yellow mongooses are seasonal breeders and females produce two litters annually, the first around October and the second litter between December and February. There are two to three pups per litter. When they occur in colonies or groups, several females may be reproductively active within the group and their oestrus cycle is highly synchronised with copulation taking place within a two-day period. The gestation period is 60–62 days. The onset of the second oestrus occurs during the lactation period when pups are suckled for six to eight weeks. After eight weeks, the weaned pups accompany adults for foraging for the first time and they become nutritionally independent at 16–18 weeks.

Yellow mongooses usually occur singly or as pairs, the exception being during the breeding season when the young produced that year stay within a group. Sociality allows for reduced predation among the juveniles. Burrows can be interconnected and may be occupied by a colony of eight to ten mongooses. Subordinate males disperse to neighbouring territories when mature. The home ranges of males may overlap with several female home ranges, but the home ranges of females from different dens do not overlap.

Yellow mongooses frequently share warrens with ground squirrels (Xerus inauris) and suricates (Suricata suricatta). Yellow mongoose is preyed on by jackals, snakes and birds of prey such as eagles.

Poorer World Without me

Yellow mongooses may play an important role in regulating rodent and insect populations.

Yellow mongooses are generally regarded as problem animals in areas where their habitat overlaps with human settlements because they will take hens’ eggs and free-ranging chickens, but are normally deterred by the wire netting around the runs. Yellow mongooses are a natural reservoir of the viverrid strain of rabies, which they are able to carry asymptomatically for years while spreading and infecting others animals. The high prevalence of rabies in the species is because they often occur in high densities in confined burrows, which promote incidences of transmission.

Yellow mongoose is listed as a species of Least Concern in the last Mammal Red List because it is relatively widespread and common, currently has no major threats and is present in several protected areas.

The yellow mongoose is the only member of the genus Cynictis, which is in the family Herpestidae.