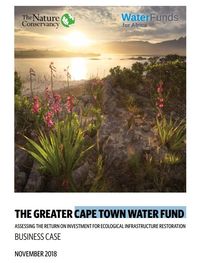 At the height of the water crisis, in early 2018, dam levels dropped below 20% and Cape Town prepared for the day when the taps would run dry, known as Day Zero. Day Zero was narrowly avoided due to adherence to short-term water use restrictions, a cut in irrigation water to agriculture, and additional water pumped in from a neighbouring scheme.

The focus has been on grey, or built, infrastructure solutions to combat water scarcity, however, there is another more cost-effective option with the potential to augment water supply. Long-term water security in the Greater Cape Town Region, as elsewhere, begins at the source with the ecological infrastructure that regulates source water quality and supply. Healthy catchments naturally store, filter, and transport rainfall to rivers and dams.

Water security is a major concern globally and increasingly so in parts of the world where supply is not able to meet demand because of either climatic or human pressures, or both. Cape Town faced the possibility of running out of water following a three-year drought between 2015 and 2018, which would have been a global first for as large a city. Not only did the drought impact urban water users, but it also had significant economic and social consequences for the tourism and agricultural sectors.

A business case has been developed that advocates ecological infrastructure restoration as a critical component of efforts to enhance water security for all users of the Western Cape Water Supply System (WCWSS). Funding and coordination of restoration efforts will be overseen by a collective action water fund that pools investment across multiple public and private water users.

The state of many of the source water sub-catchments feeding the WCWSS is being heavily degraded by invasive alien plants. These plants quickly replace local species if left unmanaged and threaten the diversity of indigenous flora in the Cape Floral Kingdom, where 70% of plants are found nowhere else on the planet. Invasive alien plants alter soil ecology, increase the frequency and severity of wildfires, and significantly impact river flow and aquifer recharge.

The Greater Cape Town Water Fund builds on the experience of more than 30 other water funds implemented or in development across 12 countries. It is the second of its kind in Africa and the first in South Africa, pioneering the use of innovative financial and governance mechanisms to protect and restore the catchments upon which the Greater Cape Town Region’s economy and livelihoods depend. The water fund also serves as a model for establishing water funds elsewhere in the country.

The Greater Cape Town Water Fund is bringing together private and public sector stakeholders – alongside local communities – around the common goal of restoring the surface water catchments and aquifers that supply our water. The fund aims to support and align with existing government initiatives and act as a catalyst for systemic change in catchment management by cost effective use of on-the-ground resources, strengthened capacity, and robust monitoring and evaluation. In addition, the water fund will stimulate funding and implementation of catchment restoration efforts and, in the process, create jobs and momentum to protect globally important biodiversity and build more resilient communities in the face of climate change.

While the focus of this business case is on invasive plant removal to restore seven priority sub-catchments supplying the WCWSS, the scope of the water fund will be broader in supporting additional ecological infrastructure interventions to secure water supply. Efforts will focus on the restoration of four priority wetlands, controlling invasive alien plants in former forestry areas, and restoration of natural vegetation on the Atlantis Aquifer.

The Greater Cape Town Water Fund Steering Committee will use the results of the business case study to co-develop, with stakeholders, an ecological infrastructure restoration strategy for the WCWSS focused around the seven priority sub-catchments. Putting the strategic plan in place will include building the institutional capacity of the Greater Cape Town Water Fund to lead or support restoration efforts and creating mechanisms such as an endowment fund to help ensure sustained funding.

The water fund will support the development of differentiated employment models for the various components of ecological infrastructure restoration to maximise efficiency and effectiveness, especially the clearing of rugged terrain. In addition, the integration of fire as a control method will be implemented at scale and the results monitored. Operational flexibility will ensure timely follow-up and maintenance of burned areas to avoid densification following unplanned fire events.

Other priorities include the restoration and protection of wetlands upstream from the dams, riparian restoration, the development of a well-resourced and well-coordinated governance body, and continued monitoring and evaluation against targets.