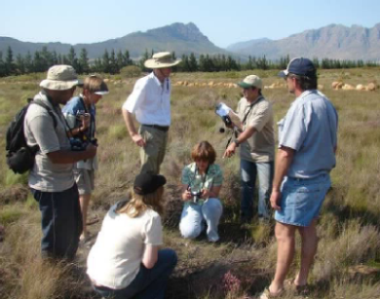 Landscape initiatives operate across the Western Cape of South Africa. But, because they differ in structure along the lines that some are biosphere reserves while others are set up as mega-reserves, they are not always well understood.  The Upper Breede Collaborative Extension Group (UBCEG) is a powerful landscape initiative in the Cape Winelands, which brings partners in agriculture and conservation together. It covers an area of around 140 000 square kilometres, including pristine conservation landscapes and some of the country’s most productive land.

According to Rudolph Röscher, Western Cape Department of Agriculture, LandCare manager in the Cape Winelands, UBCEG was created in the early 2000s to address many challenges in the area. ‘Chief among these was the lack of coordination between different government departments. There was no collective vision and common goal by the different spheres of government.’ This led to many negative outcomes. For example, departments took long to process development applications which in turn impacted on the local economy. Uncoordinated development planning resulted in some illegal developments. ‘We also found there was often little community buy-in and therefore no contingency in projects rolled out by government. Once the project was finished, the situation became as it was before. So communities lost their trust.’

In 2003, partners in agriculture and conservation started exploring ways to work together. The goal was to improve relations between government departments, rural communities and landowners living in the Upper Breede River Valley. Over the next three years, funding was sourced and maps were created to better understand the natural resources of the area. These maps also helped departments, conservation authorities (like CapeNature), non-profit organisations and land user groups see where their work overlapped. A terms of reference for the functioning of UBCEG was developed and by 2006 UBCEG was named and officially launched. Röscher, the current UBCEG chair, said, ‘We keep things simple. It’s voluntary to be there and not top down. We don’t expect someone to do something new. The purpose is to stick to what you’re supposed to do, but see where there is synergy and support.’

UBCEG is a powerful and energetic grouping. What started out as a few representatives from provincial and national departments, today brings 21 departments, municipalities, NGOs and companies together. That equals around 64 individuals who are now invited to attend. Röscher says there are only a few rules: your organisation must always be represented at each of the quarterly meetings and the minutes are driven by action points. This means that members must give feedback and actively participate at each meeting. While UBCEG is now one of the nine landscape initiatives in the Western Cape that have signed as members of Cape Action for People and the Environment (CAPE), they had humble beginnings. ‘We started as a small group who asked: how do we want the Upper Breede Valley to look in future? And we did an exercise to understand each other’s mandates. Then we focused on areas that we could work together and make a difference,’ said Garth Mortimer, senior manager for Protected Area Expansion and Stewardship at CapeNature.

Today, one of UBCEG’s greatest successes is easy to see: landscapes across the Breede River Valley that have largely been cleared of invasive species. ‘The alien clearing became the glue that brought us together, and made us stick,’ said Mortimer. Elkerine Rossouw, water use specialist at the Breede Gouritz Catchment Management Agency (BGCMA) agrees. Rossouw attended her first UBCEG meeting in 2012. Here she heard Röscher and Mortimer highlight the challenges of invasive plant species. ‘I can’t really tell you how it happened, but I went to my boss and asked for money. I realised we have to work together to clear aliens.’ The BGCMA made around R700 000 available. With co-funding from LandCare and other partners, a Critical Biodiversity Area, the 650 ha Papenkuils Wetland, which is a top conservation priority in the Upper Breede River Valley, was cleared of invasive plants.

Roussouw said, ‘From there it just snowballed. The alien clearing was visible immediately. So in the next year, I could ask for additional funding.’ So much so that in the last financial year (2016/17) around R8 million was spent on alien clearing and river restoration on private land in the Upper Breede alone.

UBCEG’s members also focus on raising awareness with partners and the youth. Three farmers’ days are held every year, organised by UBCEG members. UBCEG members also work with 47 farm schools to support environmental education. Through the UBCEG partners, 34 food gardens are operating in the Worcester area.

Landowners benefit either directly or indirectly from UBCEG’s activities. Local sustainable resource committee members are invited to attend UBCEG meetings. These committees consist of farmers and land users in the area. Here they have access to government departments, where ideas and concerns can be debated, bringing strategies and plans closer to practical implementation on the ground.

Röscher says project managers and middle managers attend UBCEG. ‘They are at the coalface of activities, and provide the extension on the ground. These individuals can also bring the needs of the landowner to UBCEG.’

UBCEG ideally enables its members, including government, to work better. Röscher said, ‘We partner to deliver a better service to the farmers and to people living in the rural communities. Now we can pick up the phone, talk to one another, and get support from each other. The best bit is that people can see things are happening on the ground. Projects are being implemented. And that helps us build trust with each other.’