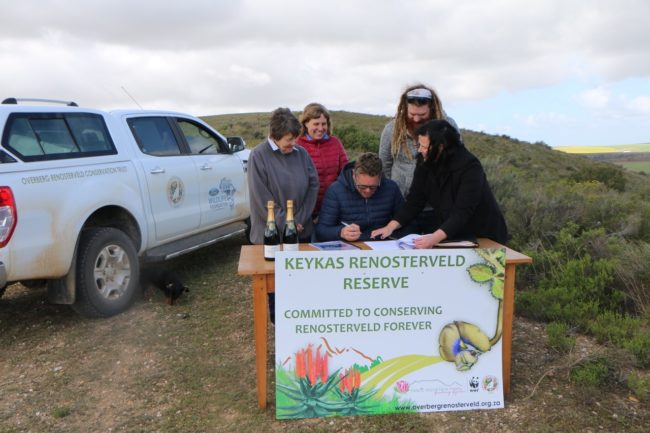 South Africa has been at the forefront of finding innovative ways to protect biodiversity rich landscapes that are privately owned. From biodiversity stewardship, to protected environments, to private nature reserves, there are many mechanisms available for landowners to formally protect their land.

A challenge is limited capacity and resources, resulting in circumstances where the need to protect biodiversity outweighs the supply to do so. This begs the question, ‘What must be done to address the limited capacity problem?’ Enter the Overberg Renosterveld Conservation Trust (ORCT) which has piloted, and is now rolling out, a Conservation Easement Programme in the Overberg to protect Renosterveld.

Why is this crucial?

Only 5% of Renosterveld vegetation remains in South Africa. The rest of its natural extent has been ploughed up for agriculture. According to Dr Odette Curtis-Scott, Director of the Overberg Renosterveld Conservation Trust (ORCT), ‘These are small fragments of natural landscapes that still provide a home to an extraordinary diversity of plants and a wide range of wildlife including thousands of pollinators.’

In order to protect these Renosterveld patches, most of which occur on private land in valleys and hills that can’t be ploughed, the easement model was first tested in 2017. Farmers who wish to protect their Renosterveld into perpetuity enter into an agreement with the ORCT, and in turn, the ORCT supports management actions such as invasive clearing, ecological burns, erosion control, wildlife monitoring and more.

‘Nature was here before us.’

Recently, a sixth Overberg farmer, Nico Neethling, committed 142 hectares of Critically Endangered Central Rûens Shale Renosterveld to conservation via an easement. This takes the total number of hectares in the ORCT’s easements programme to around 1 500 hectares under protection.

The ORCT has worked with the World Wide Fund for Nature (WWF)-South Africa to design and test the conservation mechanism. Funders include the Table Mountain Fund (TMF), the Ford Wildlife Foundation, Mapula Trust and the Hans Hoheisen Charitable Trust.

In his own words Neethling explains why he chose to protect his Renosterveld, ‘Where would the animals go (if the Renosterveld wasn’t here)? You can take it out, but why would you? In the long run, you have to think about the nature. Nature was here before us.’

So what is a conservation easement?

In simple terms, a conservation easement is a conservation servitude. A farmer registers a servitude over his or her property, in favour of a particular NGO (in this case, the ORCT). The concept was first tested in the United States of America, with the ORCT pioneering a modified version of it in the Overberg. The conservation servitude is then written into the title deeds of the farm making it applicable for current and future landowners.

In the Overberg, commercial farmer Joshua Human committed 200 hectares of Critically Endangered Central Rûens Shale Renosterveld to conservation. He was one of the first to sign an easement with the ORCT. Human says, ‘For many years, many farmers saw the natural veld as worthless, and being “in the way”. The ORCT helped me see that it’s valuable and unique: the plants, animals, birds and everything. It’s an important mind-shift that we should all make.’

An easy way to protect Renosterveld

According to Dr Curtis-Scott, ‘Easements offer landowners an easy and accessible way to protect their natural landscapes forever. For landowners, their farms are in many instances their legacy. They want their farm to be protected into perpetuity. That’s how we can help, through a conservation easement.’

According to Botriver farmer, M.G. Lötter, who signed the first easement, ‘It was a difficult decision for me originally. I wondered whether I would [see] a difference on my farm as a result of signing the easement. And I could definitely see a difference, even within a year of signing.’

Lötter continues, ‘It’s amazing to see how farmers are willing to offer up the natural veld on their farms, to work with the ORCT to help to improve it.’