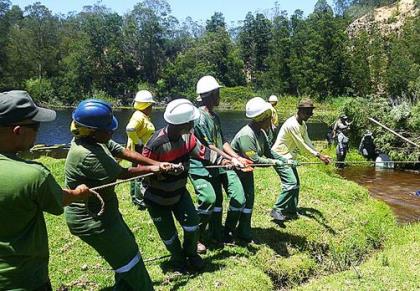 South African National Parks (SANParks) and the Knysna Marine Rangers are working together to clear alien invasive plants bordering the Southern Cape’s Knysna River. The purpose of the operation is to allow water to flow freely.

She said the collaboration had been successful in removing most of the invasive plants close to the Knysna River. ‘We took advantage of the good weather forecast for this week to clear alien islands in the Knysna River above the Charlsford Weir. This is where extraction pipes are located that supply water to the residents of Knysna,’ she said.

Alant and her teams have found creative ways of transporting cleared material across the river to the other side. ‘A challenge facing us in this task was finding teams with good swimmers. We’ve created a barge and are able to transport all felled trees on a barge across the river,’ said Alant.

Park manager for the Garden Route National Park, Paddy Gordon, said the Working for Water Programme has multiple advantages. ‘It creates work for locals and removes invasive alien plants, which is great for the river. Now more water can be released into the Knysna River. The Knysna River feeds the Knysna estuary, which is managed as a protected environment under the Garden Route National Park. The estuary opens up to the sea.’

Gordon said the initiative to clear invasive alien plants is one of several measures to promote conservation outcomes in the park’s ‘buffer zone’. A buffer zone, an area of land designated for environmental protection, was established around the park as a strategy to protect the integrity of the Garden Route National Park.