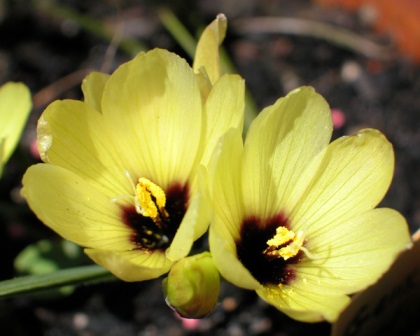 The exact boundaries of the Swartland differ depending on the map being used, but the Swartland Municipality extends from the boundary of the City of Cape Town at the northern end of Durbanville northwards to Piketberg, and from Yzerfontein in the west, to the Berg River near Riebeek-Kasteel and Riebeek West in the east. At the heart of the region lies the largest town, Malmesbury.

Due to its relatively flat topography, fertile soils and close proximity to Cape Town, the Swartland became established as a wheat-growing area around the mid-1700s. In the late 1800s, when gold and diamonds were discovered upcountry, farming in the region expanded significantly. During this time the Swartland became an almost uninterrupted agricultural area.

While the region encompasses patches of fynbos, the predominant vegetation type in the Swartland was historically renosterveld – an evergreen shrubland which mainly comprises species in the daisy family with a wealth of grasses, annuals, herbaceous perennials, and an extraordinary array of geophytes.

The three major families that typify adjacent fynbos shrubland – Proteaceae, Ericaceae and Restionaceae – are rarely present or entirely absent in renosterveld. While it is most often seen in a shrubland state, renosterveld also encompasses other structural forms, including tussock grasslands, grazing lawns and bulb lands. Renosterveld is found on richer soils such as shale-derived clays. These richer soils, which are so well-suited to wheat and deciduous fruit production, are the primary reason for the wholesale destruction of this lowland habitat.

A very prominent feature of Swartland renosterveld is its heuweltjies (earth mounds). These are the distinctive circular patches or ‘spots’ in the veld that give the Tygerberg its name. Heuweltjies are associated with termite nests. These patches are subject to constant disturbance by termites and their predators, and the ongoing transportation of plant material by termites to the heuweltjies results in nutrient enrichment of the mounds.

The most notable renosterveld remnants in the Swartland are found on the Darling hills, the lower slopes of the Paardeberg and surrounds, and several patches around Malmesbury, Moorreesburg and the village of Koringberg. The lower slopes of Piketberg and Kasteelberg, and the upper slopes of the Porseleinberg also support noteworthy tracts of renosterveld. Most of the remnants that are not associated with larger mountains are scattered as small pockets on isolated hillocks or as slivers of veld flanking watercourses that snake across the landscape.

Four of the 30 recognised types of renosterveld occur in the Swartland, namely Swartland Shale, Granite, Silcrete and Alluvium Renosterveld. Three of these types are classified as Critically Endangered and the fourth as Vulnerable.

The South African Red List (2017) notes that of South Africa’s 449 national vegetation types, Swartland Shale Renosterveld contains the highest concentration of threatened plant species: 214 species in total, 25 of which are endemic to the vegetation type. Historically, the Swartland’s next most widespread vegetation type was Swartland Granite Renosterveld. Silcrete Renosterveld is naturally fragmented across the region, while Alluvium Renosterveld occurs in narrow belts in the southern Swartland, primarily around Klipheuwel, Malmesbury, Moorreesburg and Darling along the Groen and Diep Rivers.

One of the most significant parts of the Swartland from a botanical perspective is the hilly area to the west of the region with the town of Darling at its heart. Every spring the town attracts thousands of people who come to see the area’s beautiful wildflowers at the famous Darling Wildflower Show. Packed with geophytes, these hills boast an astonishing diversity of plants in the Iridaceae, most notably the genera Babiana, Geissorhiza, Ixia and Moraea. Most of the renosterveld around Darling is on privately owned farms, some of which open their gates to the public in spring to view the flowers. The area falls within the West Coast Biosphere Reserve, and protected tracts of renosterveld are to be found in the Darling Renosterbeld Reserve, the Groenkloof Reserve on the northwestern side of Darling, Waylands Wildflower Reserve and at Tienie Versveld Reserve on the road between Darling and Yzerfontein. Unfortunately there are no full-time managers working at the municipal reserves at present, so too-frequent or too infrequent fires and alien plant invasions are issues of concern.

A new Custodians of Rare and Endangered Wildflowers (CREW) group, the Swartland CREW is working in a number of under-botanised veld remnants in the region. In 2016 and 2017, with the help of the Tygerberg and Blouberg CREW groups, they conducted botanical inventories of several renosterveld remnants in the Riebeek Valley, Moorreesburg and Malmesbury areas. Much of their efforts have focused on two very diverse remnants in Malmesbury which are now being proclaimed as Contract Stewardship Nature Reserves co-mananged by Swartland Municipality and CapeNature.

Formal research on renosterveld fire ecology and the restoration potential of alien-invaded renosterveld is also underway in some of the region’s remnants. The intention is to use the results from the CREW work and the research to assist in conserving and managing these precious renosterveld remnants for future generations to appreciate and enjoy.

The South African Red List (2017) is available at: http://redlist.sanbi.org/

This article is adapted from the December 2017 Veld & Flora publication.