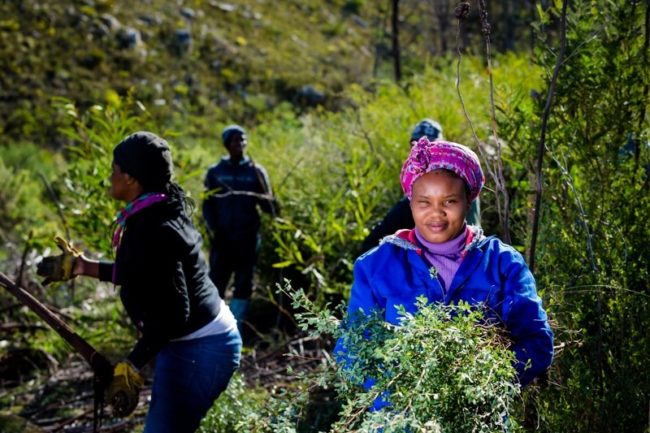 Is the Overberg’s water secure? That has been a consistent theme for the Agulhas Biodiversity Initiative (ABI) over the past months. In order to better understand this, the ABI Coordination Unit, led by Flower Valley Conservation Trust’s Lesley Richardson, is working to identify threats to water security, and investigate potential solutions by creating a regional Water Fund.

What is a water fund?

Working with partners, Richardson is now assessing the feasibility for such a fund for ABI. Through a small ‘roadshow’, she is defining the extent of the threats to the Overberg’s water supply (including invasive species plants) and attracting the right partners. Richardson is working with the Greater Cape Town Water Fund – a successful fund looking at removing invasive plants from catchments in the Greater Cape Town.

The Overberg is still caught up in the midst of a drought, despite some recent rains. A drought assessment analysis by the Department of Environment, Forestry and Fisheries (DEFF) found parts of the Overberg were still classified as ‘extremely critical’ and is likely to get worse over the upcoming summer months. According to Reinard Geldenhuys, Chief Fire Officer at the Overberg District Municipality, at a recent ABI meeting he shared that early weather forecasts suggest below average rains and above average temperatures over the coming fire season. ‘We’re getting veld fires throughout the year now. So we need to be wildfire ready all year.’

Geldenhuys said the impacts of the drought are clear following a September fire at the Denel Overberg Test Range. ‘We had such aggressive fire behaviour at that fire. That’s as a result of the drought and climate change.

The threat of invasive plants

Richardson mentioned that invasive plants remain a major threat to the region’s water supply – and increase the risks of devastating wildfires. In the Overberg, a number of projects are looking to address the challenges created by invasive plants.

The ABI Alien Clearing Programme, implemented by the Flower Valley Conservation Trust, is clearing invasive species on around 5 700 hectares of natural landscapes over the next year. The project is funded in part by DEFF with co-funding support from landowners and philanthropic donors.