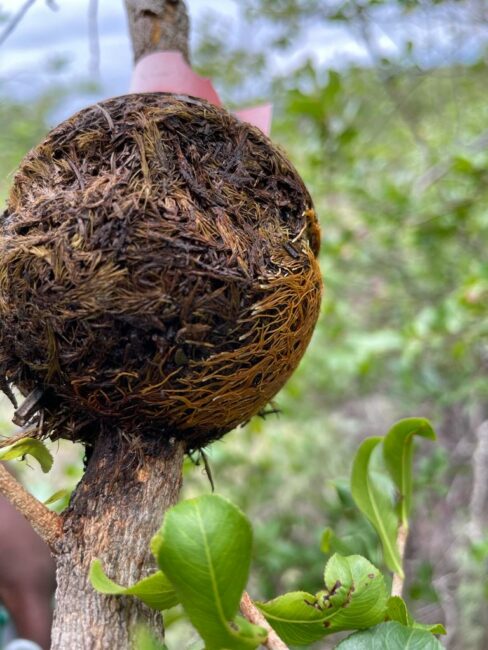 These saplings of propagated trees will be used to establish ex situ collections and more propagation research trials at Cape Town’s Kirstenbosch National Botanical Garden, as well as Limpopo’s Thohoyandou National Botanical Garden. The overall success of this project contributes to the Global Strategy for Plant Conservation; making 20% of threatened plant species available for recovery programmes, and at least 75% available in the country of origin.

In 2020 Gabayi highlighted the severity of threats to the Mutavhatsindi tree’s existence in South Africa, as none had been successfully propagated before. They only exist in a small 110-hectare subpopulation in Mutavhantsindi Nature Reserve where they are favoured for their medicinal benefits and are therefore heavily harvested. Missouri Botanical Garden and the University of Venda in the Limpopo Province, together with the SANBI team collaborated to save this highly Endangered tree species. 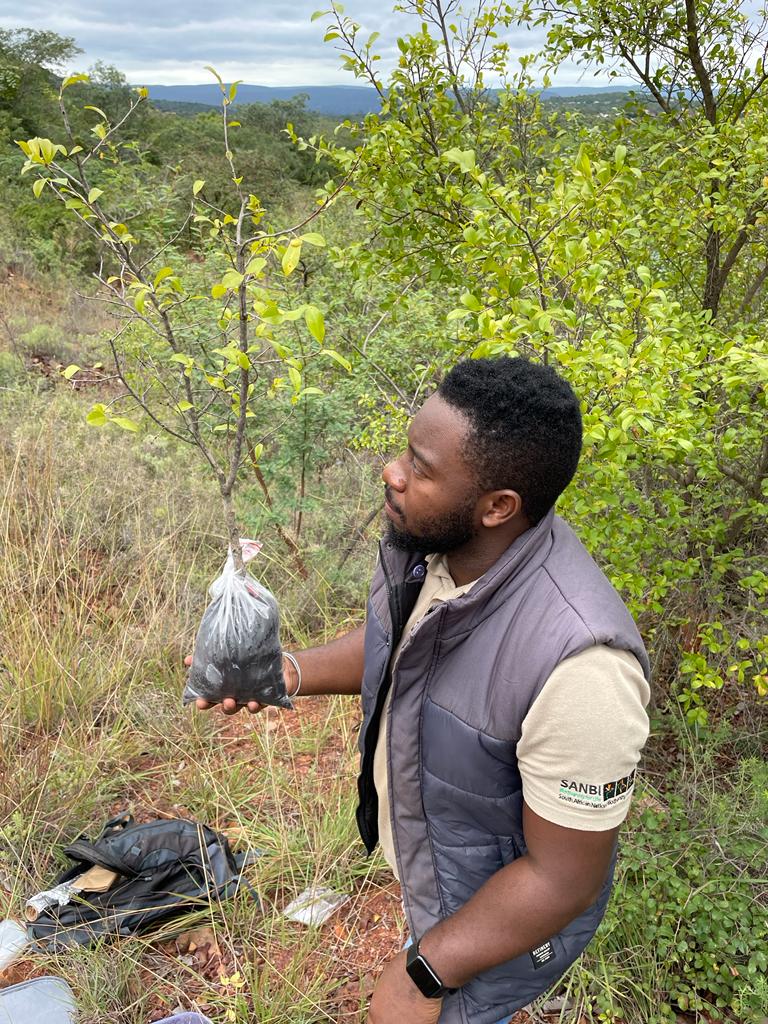 Above: One of the successful saplings of Brackenridgea collected from Mutavhatsindi NR

This project was supported by ArbNet, Botanic Gardens Conservation International,the Millenium Seed Bank Partnership and Propagation BioScience Research (PBR) International. These institutions teamed up to create a long- term project that will eventually result in saving and preserving the South African gene pool through ex situ and in situ conservation.

The Mutavhatsindi, scientifically known as Brackenridgea Zanguebarica, is a species of tree that has been under extreme threat due to the harmful harvesting of mature tree parts, which inevitably resulted in the poor regeneration of the new generations of trees.

“Mutavhatsindi is highly sought after for its medicinal bark and roots, and traditional healers use the yellow dye to treat wounds, worms, aching hands, swollen ankles, and amenorrhea. Due to its severe rarity and limited occurrence, the tree is currently categorized as Critically Endangered on the Red List of South African Plants,” explains Gabayi, who says that the Mutavhatsindi tree was propagated successfully after experimenting with many different propagation methods.

All the propagation methods tested had not shown any promising results. However, through the manipulation of Plant Growth Regulators using the air layering method and Dyna Ball (PBR international), positive results were obtained. The propagules had shown a good set of healthy roots emerging but had a low rooting percentage of 15%. Through a successful procedure of air layering, new trees can be grown from branches that are still attached to the parent plant. More propagation methods and procedures are still under trial to build onto the current successful experiment.

“For future generations to appreciate the existence of the Mutavhasindi tree, it is of utmost importance that the need for its conservation is incorporated into education, communication, and public awareness programmes.

By exchanging information on environmental legislation and methods of propagation and cultivation, people will better understand the value of biodiversity and the steps they can take to conserve and use it sustainably. This coincides with SANBI’s overall mandate, ‘To explore, reveal, celebrate and champion biodiversity for the benefit and enjoyment of all South Africans’,” concludes Gabayi.

Click here for more information on the conservation efforts and unique species found at Kirstenbosch.