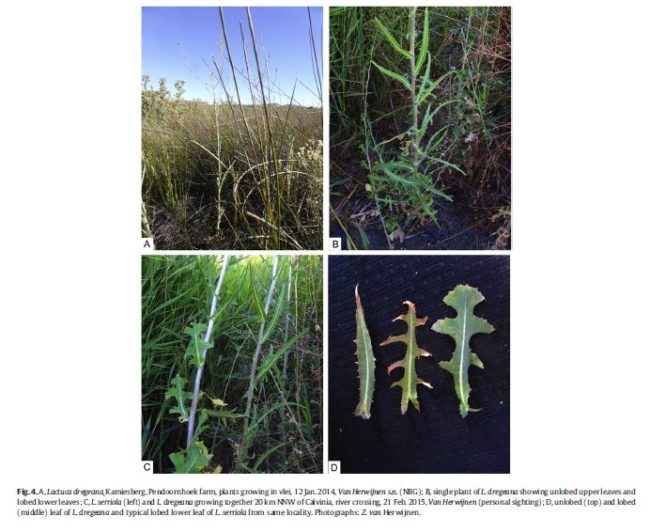 Intensive searching throughout South Africa over the past few years has uncovered just three wild populations of South Africa’s wild lettuce Lactuca dregeana in parts of the Northern Cape province. This rare and disappearing species may have value in lettuce breeding, being interfertile with Cultivated lettuce, and is sought after for inclusion in germplasm collections.

A collaborative and recent modern study into Drège’s lettuce, Lactuca dregeana, by John Manning of the Compton Herbarium and colleagues from crop research institutes in the Czech Republic and the Netherlands has shed light on the status and origin of this enigmatic and unique species.

Manning and colleagues’ study confirms that L. dregeana is a distinct South African species and not a form of Cultivated lettuce, Lactuca sativa. Drège’s lettuce is closely related to Cultivated lettuce yet worryingly it seems to have disappeared from all or most of its historical range. Doubt has even been cast on its status as a separate species as the species has been rarely recorded in recent decades.

Fascinating insights onto the origins and history of the species were discovered by doing new analyses of the morphology and DNA sequence data about these plants. Both Cultivated and Drège’s lettuces appear to have originated at a similar time several thousands of years ago, and Cultivated lettuces can be traced back to Egypt, where evidence of their cultivation is recorded as far back as 2 500 BC.

Results from the study confirm that in the wild Drège’s lettuce hybridises with both Cultivated and the weedy Prickly lettuce, Lactuca serriola, and that this is a likely cause of its disappearance from its place of origin. The results also confirm that Drège’s lettuce is indeed a distinct species closely related to Cultivated lettuce. Both species are derived from the Prickly lettuce, a Mediterranean species that is now a widespread weed in many parts of the world, including South Africa.

Today forms of semi-cultivated lettuce are still being used as animal fodder. There are concerns about the disappearance of Drège’s lettuce, as along with it will go any genetic innovations that could be introduced to Cultivated lettuce. Going forward, more observations and quantitative data are needed before conclusions can be drawn regarding whether South African wild lettuce is under threat from hybridization.