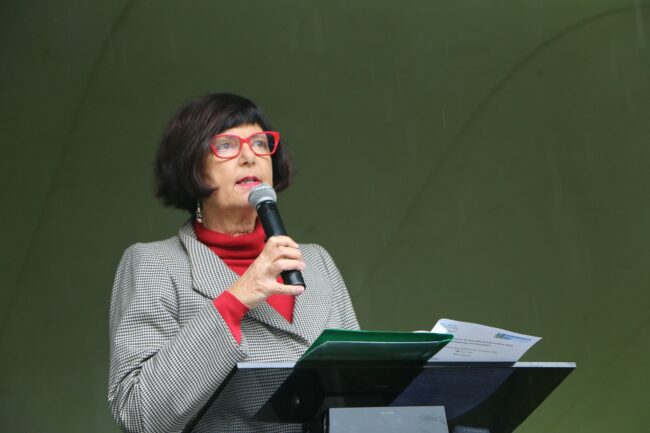 The launch of the Thohoyandou National Botanical Garden by the Minister of Forestry, Fisheries and the Environment, Ms Barbara Creecy, serves as a prime example of South Africa’s commitment towards ensuring that our local communities are supported and uplifted whilst also ensuring that our unique natural environments and resources are conserved.

A milestone moment celebrating conservation and community upliftment was commemorated today, 22 May 2022, at the formal launch ceremony of the Thohoyandou National Botanical Garden on International Day for Biodiversity.

The theme for this year’s International Day for Biodiversity is, Building a shared future for all life, which today’s proceedings so aptly captured. The theme, building on the momentum of the last two years’ celebrations, aims to raise awareness of the role that biodiversity plays for people, and to further demonstrate the potential role that people can serve for biodiversity.

“Conserving and restoring ecosystems, such as wetlands, rivers, and catchments, can reduce the disastrous impacts of extreme weather events, including floods and droughts,” says the Minister of Forestry, Fisheries and the Environment, Ms Barbara Creecy.

At a global level, the Convention on Biological Diversity intends for International Day for Biodiversity 2022 to create new energy and momentum that will be supportive of the Post-2020 Global Biodiversity Framework, which is expected to be adopted at the upcoming Conference of Parties (COP 15), where a new deal for nature and people is expected to emerge.

Furthermore, this action-oriented theme is well aligned to the ongoing United Nations Decade on Ecosystem Restoration. This initiative promotes the notion that biodiversity can be the solution to a number of sustainable development challenges.

The official declaration of the Thohoyandou National Botanical Garden today was monumental, as this garden is the first national botanical garden in the Limpopo province and the 11th in the country.

The Thohoyandou National Botanical Garden supplements South Africa’s network of national botanical gardens by contributing approximately 82 hectares of the Soutpansberg Mountain Bushveld. With only a mere 2.2% of this threatened vegetation type currently under formal protection, the declaration and launch serves as a conservation win for the country and its people.

Situated within the Vhembe Biosphere Reserve, the largest biosphere reserve in the country, the garden is home to a number of unique butterfly species, insects and threatened plant species. Of special importance, not just to conservation but to the local communities are the various plant species that have important medicinal properties and value.

“I would like to thank and appreciate the visionaries who saw it fit to establish herbarium in 1976.and this this area as a botanical garden. SANBI envisages that the plan for the Thohoyandou Garden will increase its educational value, financial viability and the interest and support of visitors, tourists, and the local community. We envisage the garden design where the choice of species represents multiple values of plants to the people, communicated in highly innovative, yet culturally appropriate ways,“ said SANBI Chairperson, Prof. Edward Nesamvuni.

Our vision is for this botanical garden to play its part in highlighting and promoting indigenous plants that are used for food, African arts, medicine, perfumes, traditional architecture, horticulture, and agriculture, and a garden that serves to increase the connection between people and biodiversity.

The infrastructure that the garden hosts will serve as a biodiversity centre for the province, showcasing traditional botanical garden features and scientific research facilities. As a nature-based, cultural and scientific tourism attraction, the garden will contribute to the socio-economic development of the area, supporting the surrounding communities including the youth, students and local businesses.

In addition to the conservation and socio-economic value that the garden has, it also holds insurmountable cultural significance especially to the Mphaphuli community members, who live in and around this area.

This land, now included under the conservation estate of the country, was part of a land claim lodged by the Mphaphuli and Tshiluvhi communities, who were forcefully removed from their land in the past.

These communities by agreeing to the governments offer of being financially compensated for their land and allowing their land to form part of a greater initiative, had already identified and appreciated the essence of what Building a shared future for all life, meant.

This garden will continue to support communities in a number of ways such as: ensuring access to the ancestral gravesites and ruins; ensuring that there is historical acknowledgement through the naming of structures in the garden; it will include traditional designs adapted from the rich traditional knowledge of the Mphaphuli Community; the garden will also host workshops for traditional leaders and healers to raise awareness around sustainable harvesting of medicinal plants; local students will also benefit from educational programmes; and overall, the garden will create temporary job opportunities for the local communities.

South Africa is equipped with a number of interventions to address the challenges faced by biodiversity and the negative impacts that has on people. Strategic implementation of these interventions and its translation into impactful actions will assist in maintaining a holistic approach to conservation whereby the relationship between nature and people is at the forefront.

One such strategic policy intervention is the National Botanical Gardens Expansion Strategy published in 2019.

“The Strategy aims to firstly, establish at least one botanical garden in each province; secondly to ensure that all biomes are represented in the establishment of new botanical gardens and lastly to expand existing national botanical gardens as we have recently done for the Harold Porter National Botanical Garden in the Western Cape,’’ added Minister Creecy.

The establishment, future developments and improvements to the Thohoyandou National Botanical Garden will be aligned to this strategy.

There is no better time than the present to shift focus and encourage change for the world and South Africans to nurture nature, for the well-being of people and the environment.

Minister Creecy concluded by adding that this milestone of establishment of the Thohoyandou National Botanical Garden paves the way for future initiatives that aim to protect the country’s precious biodiversity and simultaneously uplifts and supports local communities, whereby South Africans continue to learn to build a shared future for all life.

Issued jointly by the Department of Forestry, Fisheries and the Environment With South African National Biodiversity Institute (SANBI).