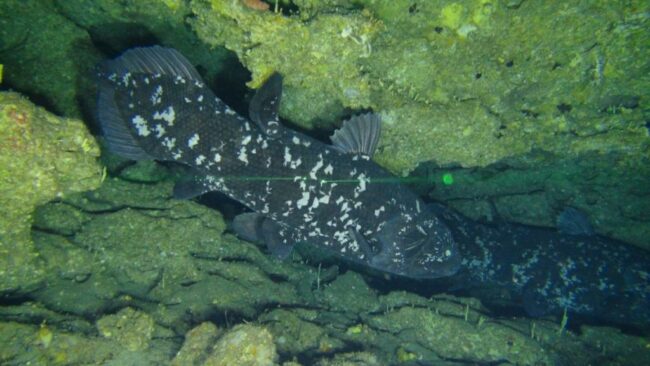 On World Oceans Day 8 June 2022, South African National Biodiversity Institute marine scientist Prof Kerry Sink and her Deep Connections project team will unveil findings from a three-week research expedition at iSimangaliso Wetland Park. This year, the theme of World Oceans Day is ‘collective action to revitalise our oceans’, and this expedition is an excellent example of the teamwork needed to collectively understand, benefit from and protect South Africa’s oceans.

Expedition team members spanned eight institutions and included dedicated crew aboard the Research Vessel Phakisa, experienced and emerging scientists and students. The team conducted 61 Remotely Operated Vehicle (ROV) dives during which they collected more than 25 hours of video footage, 77 specimens for taxonomy, genetic, pollution and marine natural product research; collected data to support coelacanth population studies and deployed instruments to study temperature and oceanographic patterns in the study area. Focus species included coelacanths, seabreams and glass sponges with underwater canyons and deep-sea sponge habitats being the focus of ecosystem research. This will help scientists understand the conditions in the underwater canyons and associated amazing sponge habitats to find out what sets the areas with high sponge densities apart from other areas. 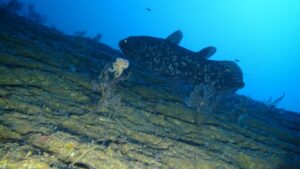 Thor, a new coelacanth named after the captain of the Research Vessel Phakisa Thor Eriksen. This coelacanth has a distinct hammer-shaped mark on the tail. Credit ACEP Deep Connections Project.

The Deep Connections team had a total of 16 coelacanth sightings, compromising 6 different individuals including two new individuals observed for the first time. Coelacanths are believed to be very slow growing and long lived with recent research suggesting that they reach sexual maturity around the age of 40, may be pregnant for five years and live for more than a century. One of the 4 known individuals seen in 2022, named Triton, was first documented 22 years ago by the mixed gas deep divers who discovered the coelacanths in iSimangaliso in 2000. This is the longest record of an individual coelacanth and aligns with other evidence that suggests these fish are long lived and highly resident. 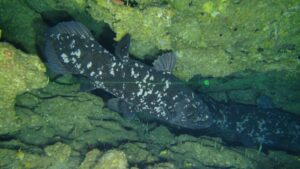 Triton, the second coelacanth documented at Sodwana Bay was re-sighted by the Deep Connections team in the same place, 22 years after it was first discovered by deep divers in Jesser Canyon. Each coelacanth has unique spot patterns that allow researchers to identify and follow the lives of these long-lived resident fish over the decades. Credit ACEP Deep Connections Project.

The scientists use lasers to help measure the coelacanths and are hoping to measure growth of these slow growing fish over time. Two other coelacanths that were re-sighted were individuals that were tagged in 2003 and 2013 and had yielded valuable insights into coelacanth behaviour in the Park. Sink explained:

“We are deeply connected to these individual fish having studied the same individuals over two decades and are excited that we are entering a new era where local scientists can independently study these incredible animals and the fascinating ecosystems that support them’’. Emerging researcher from SANBI, Mr Luther Adams was amazed by the proximity of the deep sea to the iSimangaliso shore,

‘’Nothing compares to bearing witness to coelacanths from live ROV footage from the canyons beneath us while seeing figures on the beach in the distance. In iSimangaliso, the deep sea is truly on our doorstep”.

The two new coelacanths bring the total number of coelacanths in South Africa’s catalogue to 38, 35 of which are known from iSimangaliso. The 38 includes three new fish found off Pumula on the KwaZulu-Natal south coast between 2019 and March 2022. The uMzumbe canyon off Pumula is the next destination for the research team. 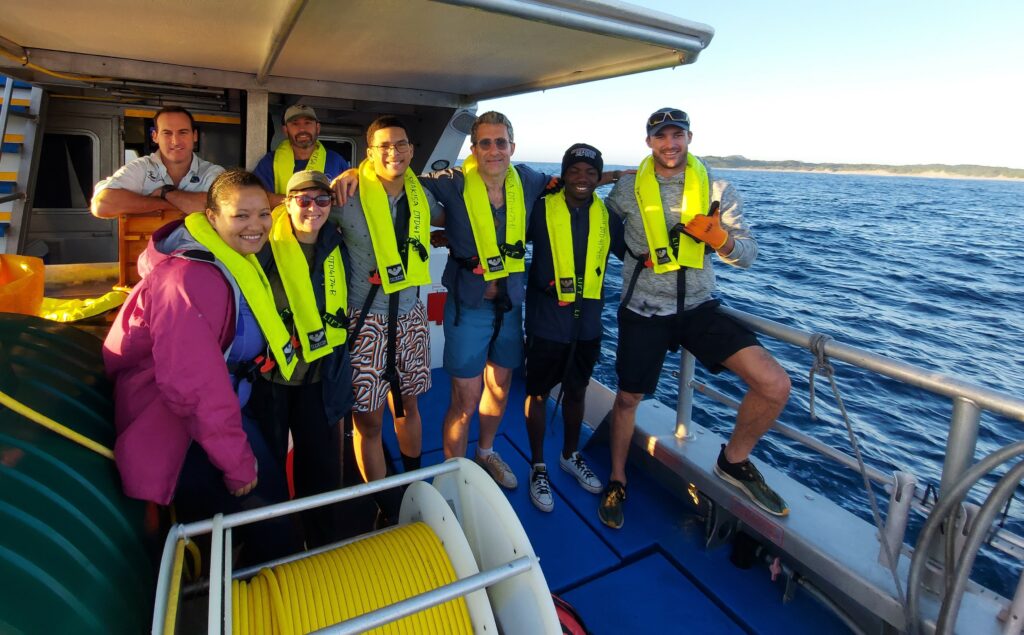 The Deep Connections Project builds on 20 years of coelacanth and ecosystem research. Sink, also a Professor at Nelson Mandela University explains how the project spans different disciplines and brings multiple forms of knowledge together to help broaden the knowledge base for healthy oceans and all who depend on them. The multi-disciplinary project spans biology, chemistry, oceanography, geology, social science and art with plans to jointly apply results and outputs from all components to provide modern solutions to current challenges.

The project includes several former and current students of Sink and international collaborations to apply cutting edge techniques in coelacanth, ecosystem, genetic and pharmaceutical development research. The molecular research is led by Dr Gwynneth Matcher of SAIAB and Rhodes University with collaborations at Liverpool John Moore University in the UK. PhD student from Rhodes University, Ms Jody Oliver was on the expedition collecting data for her doctoral thesis and expressed her wonder at the teamwork involved, the beauty of the iSimangaliso seascapes and the experience of witnessing the ancient fossil fish.

‘There are not many marine science students who get to see a coelacanth on their first day of field work!’ Jody noted. Dr Sean Porter, senior scientist at the Oceanographic Research Institute in Durban is leading the pollution component of the project that will help assess the health of deep-sea animals in South Africa’s first World Heritage Site.

The project also includes innovative social and cultural aspects that recognise the deep human connections with the ocean and the team are working on a coelacanth puppet, play and children’s story.  In the spirit of the call for unified action for this year’s World Oceans Day, the Deep Connections team invite all South Africans to recognise that oceans give us life and to celebrate biodiversity in our oceans and the wonder, connection and benefits we all derive from healthy oceans. 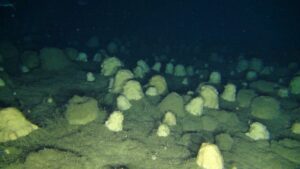 Like an alien landscape, this habitat formed by glass sponges at a depth of 170 m inspires interest in the deep-water ecosystems of South Africa. Credit ACEP Deep Connections Project.

Two decades ago, marine scientist Prof Kerry Sink first glimpsed an alien landscape 150 meters beneath the sea at Sodwana Bay in the iSimangaliso Wetland Park World Heritage site. The discovery of a living population of coelacanths in 2000 had catalysed an international expedition using a sophisticated German submersible. During the 2002 expedition, the submersible not only recorded 11 individual coelacanths, each recognized by their unique spot patterns but documented amazing marine life in the deep ocean. The alien seascape that triggered Sink’s interest in deep-water ecosystems was a field of volcano-shaped glass sponges standing as high as 60 centimeters off the seabed and stretching as far as the eye could see. At that time, Sink had just completed her doctoral studies in rocky shores and dreamed of a day when South African scientists could not only study the coelacanths but also the other animals and their connections in the undersea canyons where coelacanths live.

The African Coelacanth Ecosystem Programme (ACEP) was developed by the National Research Foundation in response to this important scientific discovery and Sink was appointed in 2002 as a marine ecologist at the South African Institute for Aquatic Biodiversity (SAIAB), the institute with the longest history in coelacanth research and which manages ACEP. ACEP has helped develop research techniques, teams and opportunities for South Africans to conduct multi-disciplinary research in increasingly deeper waters. Seventeen years ago, Sink led the first Remotely Operated Vehicle (ROV) survey in iSimangaliso, finding 11 coelacanths in a week. This led to the acquisition of South Africa’s first dedicated research ROV piloted by Ryan Palmer (SAIAB), a platform provided through ACEP and available to multiple research projects in the country. Sink, now a Principal Scientist at the South African National Biodiversity Institute (SANBI), leads the Deep Connections project, a three-year project that has returned to Sodwana Bay to study the glass sponge ecosystem using modern technology and to build on a twenty-year data set that monitors South Africa’s precious coelacanth population. 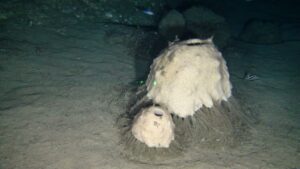 The unique silicate fibres of glass sponges visible in this image are inspiring innovation in the development of fibre-optic cables. Like other sponges, glass sponges also harbour powerful chemicals that are used in research to develop new anti-biotics and other pharmaceuticals. Credit ACEP Deep Connections Project.

For further information and other media queries please contact:

About SANBI: The South African National Biodiversity Institute (SANBI) is mandated to monitor and report on the status of the Republic’s biodiversity. Its activities include undertaking and promoting research on indigenous biodiversity and its sustainable use; establishing and managing collections of plant and animal specimens; managing and maintaining all National Botanical Gardens, with their facilities for horticultural display, environmental education, visitor amenities and research; collecting and disseminating information about biodiversity; assisting in the development of a national biodiversity framework, including bioregional plans and strategies; and coordinating programmes in conservation and sustainable use of indigenous biological resources and the rehabilitation of ecosystems.

About SAIAB: The South African Institute for Aquatic Biodiversity (SAIAB) contributes to two National Operation Phakisa Labs through which South Africa has identified the potential to develop the Biodiversity Economy and the Blue Economy. With a significant amount of funding from the Department of Science and Innovation and the National Research Foundation, over the last 10 years SAIAB has developed several high-level platforms capable of undertaking research in various environments which have positioned the Institute as an innovative leader in aquatic biodiversity research. All of SAIAB’s activities – research, student supervision and platform provision – support the Higher Education sector in the education, training and development of the aquatic managers and researchers of the future.

About SAAMBR: The South African Association for Marine Biological Research SAAMBR, founded in 1951, is a unique Non-Government, Non Profit Company and Public Benefit Organisation. In 2004, SAAMBR became the cornerstone of uShaka Marine World in Durban.