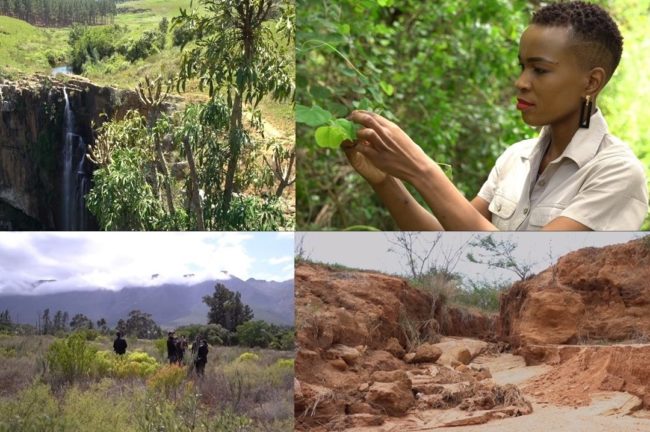 The Biodiversity and Land Use project recently completed the development of four short films to communicate the work that South African National Biodiversity Institute (SANBI) and project partners have been doing across the project target districts. The development of short films was identified as a key activity to be undertaken by the BLU project through its communications plan.

The project’s communications plan aims to contribute to achieving the objectives of the BLU project, which is to ‘mitigate multiple threats to biodiversity by increasing the capabilities of authorities and landowners to regulate land use and manage priority biodiversity at the municipal scale’.

One of the four short films produced focuses on the Blyde River Canyon Reserve and the Mahubahuba, Moarabjang, Sethlare and the Moletele Community Property Associations.  The area has a rich history with the local communities submitting land claims in the area, with the possibility for opportunities for the respective communities to benefit from tourism, and job creation through preserving their natural heritage and the environment. In anticipation of a successful land claim, these Community Property Associations representing villages situated along the Mpumalanga escarpment chose to have their land included in the iconic Blyde River Canyon Nature Reserve.

The next set of films showcases the work of the BLU project in promoting the career development of young professionals in the sector as well as improving the capabilities of relevant government entities to make good decisions that protect priority biodiversity.  As part of this commitment, the project has strategically place young and mid-career professionals within relevant government entities.

The second short film features Millicent Rosina Masango, an Environmental Officer seconded to the Mpumalanga Department: Agriculture, Rural Development, Land and Environmental Affairs. The film focuses on her journey to becoming an Environmental Officer and the invaluable contribution she makes in the department.  The third short film focuses on the importance and benefits of having specialists such as botanists in undertaking compliance, monitoring and enforcement activities. The short film provides a snapshot of Phil McLean, a specialist botanist, is employed to do with the Western Cape Department of Environmental Affairs and Development Planning.

The BLU project also developed a short film on the Ecological Infrastructure Challenge Fund (EICF) project focused on the rehabilitation of dongas at Mkhululine River, being implmented by Ehlanzeni District Municipality and the Bushbuckridge Local Municipality.  The focus of this EICF project is to improve community safety through rehabilitating dongas, and to improve the water quality and quantity of the Mkhululine River. Through the EICF, the BLU project supports municipalities to invest in projects that restore and maintain ecological infrastructure, especially where such ecological infrastructure supports municipal infrastructure.

Please view and share the films with your networks.