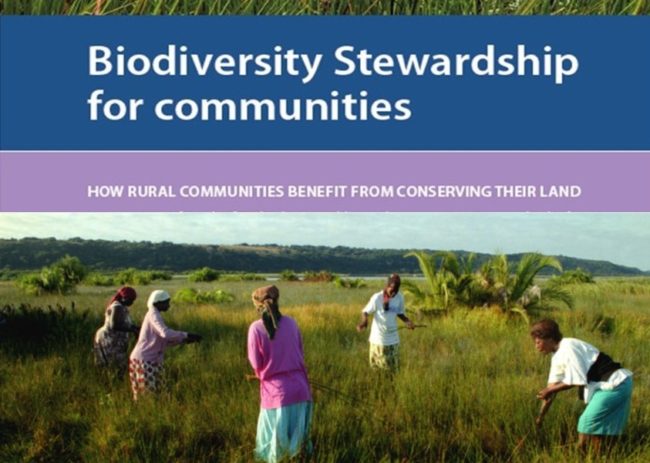 This is especially beneficial in agriculturally marginal areas, where traditional farming is less viable. At the same time, Biodiversity stewardship can help to ensure that natural resources are used sustainably and remnants of biodiversity is conserved.

The first case study is on the Mgundeni community who lives near Utrecht in KwaZulu-Natal. In 2009, it was the first in the country to sign a Biodiversity stewardship agreement on communally-owned land. The community initially opted for a 124 ha Biodiversity Agreement, but has since upgraded to a Protected Environment of 455 ha. The community has been supported by WWF-South Africa.

The second case study is on the Nambiti Private Game Reserve.  Nambiti is a 9 859 ha ‘Big-5’ reserve near Ladysmith in KwaZulu-Natal that was subject to a successful land claim, and is owned by the Senzo’kuhle Nkos’uNodada Community Trust. It was declared a Nature Reserve in 2013. It provides a remarkable model of cooperation between a community and the private sector.

More information and tangible benefits for both case studies have been detailed in the factsheet which can be accessed on the Biodiversity Advisor website.

For more information contact Natasha Wilson on 021 799 8866 or N.wilson@sanbi.org.za