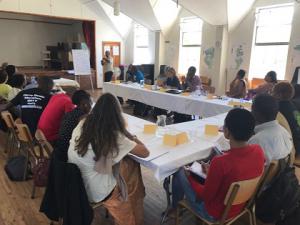 The Framework for Investing in Ecological Infrastructure in South Africa, produced by the South African National Biodiversity Institute in 2014, calls for concerted efforts to be made by various role players in mobilizing resources to manage and maintain ecological infrastructure. This call is a formalisation of the already existing partnerships of different scales and magnitude that encourage initiatives and innovations aimed at safeguarding this natural capital. The role players include mobilisation of affected local communities, government institutions and civil society organisations.  Over the years, the South African National Biodiversity Institute (SANBI) and many partners have been at the forefront of many of these efforts – providing scientific expertise, evidence-based best practices and influencing policies to demonstrate the value of ecological infrastructure to the overall socio-economic development of the country.

Interestingly there are various outstanding but less-profiled formal and informal research, development and innovation initiatives that exist to ensure ecological infrastructure is maintained for the benefit of all.  These efforts were recently recognised by the Department of Science and Technology which then tasked SANBI to establish research, development and innovation (RDI) platforms for ecological infrastructure in selected catchments.  These platforms are inspired by the fact that so much work around ecosystems and biodiversity, ecosystem services and natural resource management rest in the research community whilst other experts work in more applied contexts such as government, civil society and private sector. This work does not always get shared or integrated to suit the required standard for uptake in policy, planning, and decision making and attracting more investment.

The first phase of this project focuses on the formal establishment of RDI platforms for ecological infrastructure in the catchments of the Berg and Breede Rivers in the Western Cape and the uMzimvubu River in the Eastern Cape. These platforms will contribute to the deepening of relationships and sharing of information within these catchments as well as improving coordination of activities aimed at restoring and managing the ecological infrastructure. Valued lessons will be documented for uptake by other similar initiatives. There will be a continuous reflection of the progress made with the capturing of useful lessons and their contribution to practice. Platforms like these will help provinces like the Western Cape that remain in the intensive care of government due to low levels of dam water including river stream flows. This has not only affected the ordinary people but business and industries of the province – threatening jobs and access to basic needs of life such as clean water. The investment will stretch over two-and-half years.

The project co-ordinating team has already conducted the inception and introductory meetings in the identified catchments. The first meetings were held 23rd February for Berg and Breede, the latest was held in the uMzimvubu catchment on the 8th of March in Matatiele. A number of affected local communities and role players were in attendance which signifies the value of mobilisation of society and role players in the management of ecological infrastructure.